This clear identification of Deobandi terrorists of TTP-ASWJ by Marvi Sirmed deserves appreciation. “Once Ulema and Mashaikh meant scholars from all sects of Islam. In this Saturday’s Mulla moot – the Ulema and Mashaikh Conference – only clerics from the Deobandi School of thought were included. (Perhaps it seemed irrelevant that more than 50% of the Muslim population of Pakistan constitutes Barelvi Muslims. This leaves aside Shias of course; long time targets of the terrorists who are overwhelmingly Deobandi”. 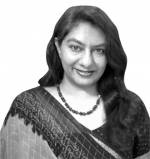 Indeed, change is the only permanent thing. Our times are awash with manifestations of this.

Once ardent allies and facilitators of the military establishment in its delinquencies, the same people are now routinely heard on TV screens casting doubts about the legitimacy of Pakistan’s soldiers battling the Taliban.

Once Tehrik-e-Taliban Pakistan, the terrorist network was just an American conspiracy and it’s foot soldiers foreign spies. Now they have become ‘our own brothers;’ the stakeholders of peace talks.

Once Osama Bin Laden was just a myth created by imperialist America to attack Muslim countries. He is now a celebrated martyr – the Shaheed.

Once these terrorists in Waziristan were Indian-backed miscreants entrusted with the task of destroying Pakistan. They are now, ‘Pakistan’s own.’

Once Ulema and Mashaikh meant scholars from all sects of Islam. In this Saturday’s Mulla moot – the Ulema and Mashaikh Conference – only clerics from the Deobandi School of thought were included. (Perhaps it seemed irrelevant that more than 50% of the Muslim population of Pakistan constitutes Barelvi Muslims. This leaves aside Shias of course; long time targets of the terrorists who are overwhelmingly Deobandi).

Once there was a consensus that the terrorist group headed by Mulla Fazlullah and his father-in-law Sufi Mohammad should be eliminated from Pakistan’s Swat. It is near consensus now that the group under the same Fazlullah should instead be negotiated with.

Once a cleric heading Islamabad’s central Lal Masjid got drunk on the power of his pulpit and violently challenged the writ of the state. This occurred under the prying eyes of the 24/7 live media culture who demanded the use of force against him. That same man sits now on those very media shows and speaks endlessly each evening against the state and constitution of Pakistan.

Once there were rights’ activists campaigning for the restoration of democracy as part of the famous ‘Lawyers’ Movement.’ These individuals became ‘civil society representatives’ for their role in the Lawyers’ Movement. Now, when they are opposing negotiating with terrorists, they are ‘on a mission to destroy Pakistan for foreign dollars.’

Once the country’s prime change monger, the Mighty Khan was against the proposed Shariat Bill announced by the incumbent Nawaz government in 1998. The same Khan is now the tallest proponent of the Islamic welfare state and panders to the ultra right.

But as they say, the more things change, the more they remain the same. This seems to be a vicious cycle of alternating dissimilarities and bizarre likenesses.
Here, in all its absurdism, are the things that seem not to have changed at all:

In the August of 1998, the Prime Minister of Pakistan announced the enforcement of Shariah through a 15th Constitutional Amendment Bill in the Parliament of Pakistan. The Bill was to render the Quran and Sunnah the supreme law of the land. The amendment could not pass because of opposition from parliamentary parties as well as internal divisions within the ruling party. The very same proposition by the negotiators of the terrorist Taliban network is now being given serious consideration albeit within the ambit of the Constitution. Seems a bizarrely quiet continuation of 1998.

There was a flawed Anti-Terrorist Act passed by Parliament in August 1997 whereby Law Enforcing Agencies were given shoot-to-kill powers amid loud disapproval of the Opposition parties in the parliament. A “Protection of Pakistan Ordinance,” is now seeking the same triumph despite strong opposition in parliament.

There are some similarities in the fashion of things that are in the offing. In the mid 1990s, continual pouring of different reports from across our northwest frontier was the order of the day. These tidings ranged from mass beheadings of the minority Shia Hazara, to people being lynched for unacceptable beard length, unacceptable Burqa length, women banned from schools, workplaces, strict segregation of the sexes and so on.

On TV screens these days, similar claims are being regurgitated by the Lal Masjid gangster as well as scores of his apologists which include senior investigative journalists (who saw no fault when Chand Bibi, a woman in Swat, was lashed publicly by the Fazlullah regime in 2009-10).

Islam might have guaranteed all these concessions but not necessarily these terrorists who use Islam’s flag for their ends. In all the euphoria for a negotiated peace, lets not throw our culture, minorities and women under the cart. A humble reminder, lest we forget.

The writer is an Islamabad based campaigner for human rights and works on parliamentary strengthening and democratic governance.\