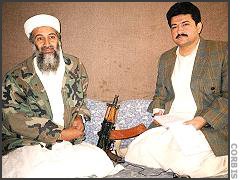 Hamid Mir’s article published in The News in the backdrop of the “peace” dialogue between the Nawaz Sharif government and the Taliban is an extraordinary development of sorts. It has laid bare a few secrets. Every word of his article “Inside story of govt-TTP talks” is worth reading to understand what is in store for the Pakistan Army. The reader of LUBP is advised to read it in full (Read: http://www.thenews.com.pk/Todays-News-13-28564-Inside-story-of-govt-TTP-talks), and then get back to its analysis given below. We will quote Hamid Mir, and then give a close attention to his words uncovering hidden ideologies and insinuations. Here are some of our points of analysis:

1. Hamir Mir: “It was for the first time that a Taliban leader participated in the government-TTP negotiations on Friday through a phone call and promised that the Taliban will seriously consider a ceasefire.”

Analysis: Mir portrays the participation of the Taliban as a historic moment worth celebrating. He is lying. In the past, the Taliban have participated in various dialogues with the government. In 2009, Swat was handed over to them after government-Taliban negotiations. The Army has had a number of dialogues with the Taliban as a result of which “peace” in FATA was made as far back as April 2004. It was the infamous negotiation between the Pakistan Army and the Taliban led by the terrorist Nek Muhammad, which led to the “peace”. The New York Times had this to say about the negotiation:

A cease-fire was negotiated in April during a hastily arranged meeting in South Waziristan, during which a senior Pakistani commander hung a garland of bright flowers around Mr. Muhammad’s neck. The two men sat together and sipped tea as photographers and television cameras recorded the event.

Both sides spoke of peace, but there was little doubt who was negotiating from strength. Mr. Muhammad would later brag that the government had agreed to meet inside a religious madrasa rather than in a public location where tribal meetings are traditionally held. “I did not go to them; they came to my place,” he said. “That should make it clear who surrendered to whom.”
The peace arrangement propelled Mr. Muhammad to new fame, and the truce was soon exposed as a sham. He resumed attacks against Pakistani troops, and Mr. Musharraf ordered his army back on the offensive in South Waziristan.

Next, Mir enthuses about the “promise” made through a telephonic call, but does not tell his readers that the promise was a sham, just like all the shams the Taliban have traded as promises. Amir Mir, who ironically happens to be Hamid Mir’s brother, in an article published on 16 February, a day after Hamid Mir’s article, chronicles that since starting their “peace” dialogue with the government, the Taliban have been regularly staging terrorist attacks on the people of Pakistan killing 8 innocent persons a day. This article is highly recommended (Read: http://www.thenews.com.pk/Todays-News-2-232696-Despite-no-drone-attack-46-terror-attacks-in-45-days)

Analysis: This is interesting. The Taliban and the Sharif government are cast in the same victim mould. Who is putting pressure on the Taliban? Certainly not India or Israel because the Taliban hate them and consider them enemies of Islam. The only countries known to the world as having influence on the Taliban are the Gulf monarchies led by Saudi Arabia and Qatar. It was Qatar which encouraged the Taliban to open their offices in Doha. Saudi Arabia is not only the godfather of Pakistan Deobandi terrorists, it is also revered by the Taliban. Thus if any country which can pressure the Taliban, it has to be a Gulf country. Why does Mir not identify the country or countries pressuring the Taliban? The answer is that he is either lying or is protecting the Gulf monarchies.

And who is pressuring the government of Pakistan? More importantly, who can pressure the Sharif government? There are only two actors in the given circumstances: the Army and Saudi Arabia. But Mir discounts Saudi Arabia, and blames the Army for the pressuring (see below).

“Nawaz Sharif faced problems with the Establishment in his previous two governments and unfortunately is facing these problems for the third time. The newly-elected government was first embarrassed on the issue of missing persons in the courts. Security agencies ignored the orders of the courts and never presented many detained prisoners in the courts despite the promises made by the PM and Defence Minister Khawaja Muhammad Asif.”

Analysis: This needs no comment, but a couple of observations can be made. First, Mir blames the Supreme Court and the Army for being anti-Sharif government. Second, he casts the “establishment”, a euphemism for the Army, in a villainous role. He is saying that the Army has not accepted Sharif as Pakistan’s prime minister even though he has been elected for the third time. If the agencies have ignored Supreme Court orders, in what way is it about Sharif or his government? It should be a matter between the Supreme Court and the Army. But Mir wants us to believe that Sharif is somehow a victim.

4. Hamid Mir: “The Nawaz Sharif government was again undermined by the Establishment when former dictator General (retd) Pervez Musharraf was given refuge in the Armed Forces Institute of Cardiology (AFIC), Rawalpindi. . . the former military chief and head of a political party is enjoying an unprecedented hospitality in an army hospital without having any serious medical problem.

Analysis: Mir is implying that to the Army, a former General is more important than Pakistan’s security. But the question is: What does the Musharraf case have to do with the “peace” dialogue with the Taliban?

5. Hamid Mir: “Nawaz Sharif was told by his close associates that some officials of intelligence agencies were secretly using some politicians and media persons in support of former dictator and the government should avoid confronting the Establishment on Musharraf’s issue.”

Analysis: Just a hearsay. This is a serious issue, but Mir offers no evidence to back his claim.

6. “The prime minister was reluctant to announce a military operation against the Taliban. . . . He gave peace a chance and set up a four-member negotiations team.”

Analysis: Did he give “peace” a chance or gave a golden opportunity to the terrorists who do not believe in the constitution of Pakistan? By going for a dialogue with the Taliban, Sharif has given away the sovereignty of the state of Pakistan. Any political scientist will tell you that the most significant asset of a state is its sovereignty. If sovereignty is lost in any measure, it is indicative of failure of a state as a political entity. Sharif has effectively broken the back of Pakistan as a sovereign state, but it is the Army which takes the blame in Mir’s aseesssment.

7. Hamid Mir: “Initially, there was an impression that the TTP will not accept any talks within the framework of the Constitution and the KP government will be forced to support a military operation against the militants in North Waziristan.
“The TTP surprised everyone by accepting that they were ready to talk within the Constitution and never forced the government to enforce Shariah in Pakistan.”

Analysis: This is glorification of the Taliban. Their consent to talk to the state of Pakistan, in Mir’s formulation, is something to be thankful for, a great gift to the people of Pakistan by them. Mir is grateful that the Taliban have not forced the government of Pakistan to enforce the Shariah at this stage.

8: Hamid Mir: “The government and the TTP negotiators were very much optimistic a few days ago about the announcement of a ceasefire from both the sides but the recent terrorist attacks in Peshawar and Karachi turned their optimism into a nightmare.”

Analysis: This is journalism at its dishonest best/worst. Who is responsible for the attacks? Whose nightmare is it? It is the Taliban who have been staging one terrorist attack after the other since the beginning of the “peace” talk. They have even been owning up to these attacks, but Mir does not want to say that. It is the people of Pakistan who have been in this nightmare, but for Mir it is the joint nightmare faced by the Sharif government and the Taliban. One thing is clear here: The Sharif government and the Taliban are one.

9. Hamid Mir: “The Taliban claimed that security agencies had killed their more than 35 arrested companions in Karachi, Peshawar and Swabi in recent weeks after the start of the talks and their attack on police commandos in Karachi was a tit for tat response.”

Analysis: according to Mir, the Taliban are the victim of Army and police atrocities having lost 35 terrorists. But the thousands of Pakistani soldiers, policemen, and civilians killed by the Taliban can be ignored. For Mir, the Taliban have the status of righteous martyrs, the rest are unlawful combatants.

10. Hamid Mir: “The Taliban leader communicated with the government committee members indirectly and said they had made only two conditions for a ceasefire, i.e. release of non combatant women and children, and secondly, they wanted the withdrawal of the army from South Waziristan only. . . . The TTP sources say that initially the security agencies will claim that they have no women and children in their custody but they can give the names and also identify the places where they were detained. The TTP sources said they never demanded the release of their male combatants because they knew the limitations of the prime minister. It is interesting to note that the TTP never demanded the withdrawal of army from North Waziristan.”

Analysis: Mir’s claim is that the Taliban do not want their men to be freed. Nor do they want the Shariah imposed. They are so principled that they want only women and kids. But the Army is a bunch of liars. The Taliban are very perceptive as they realize that the Army has put limitations on Nawaz Sharif’s powers. It is the Army which is bent upon destroying the “peace” dialogue.

Analysis: Mir wants people to believe that the Army is hell-bent upon scuttling the “peace” dialogue. If the Taliban pull out of the dialogue, the Army will solely be responsible.

12. Hamid Mir: “Nawaz Sharif does not want to lose foreign investors who will play a key role in fulfilling his political promises before the elections. The prime minister is determined to continue the talks with the TTP if they announce a ceasefire within the coming few days.”

Analysis: This is the hardest of the punches Mir has hit the Army with. The Sharif government is desperate to pull Pakistan out of its economic slough, and the Taliban are supportive of it. But it is the Army which is against the very wellbeing of the people Pakistan. The Army wants to keep Pakistan economically a failed country.

There is much more in Hamid Mir’s article and this editorial has only pointed out some of the pro-Taliban and anti-Army agendas of the author. One day after the publication of the article, Nawaz Sharif gave an interview in which he summed up all the pro-Taliban effusion and anti-Army venom in Mir’s articles. Nawaz Sharif eulogizing the Taliban said, “. . . the Taliban have given a positive response to initial efforts” (Read: http://tribune.com.pk/story/672144/taliban-have-given-a-positive-response-nawaz-sharif/).

Hamid Mir’s blatant lies and shameless pimping of the Taliban aside, Nawaz Sharif sees the Army as his enemy and considers the Taliban to be his true soldiers who will help him rule Pakistan forever. This is what he tried to do in 1999 through a proposed constitutional amendment, but General Musharraf’s coup thwarted him. Let us see how the Army reacts to his designs now.