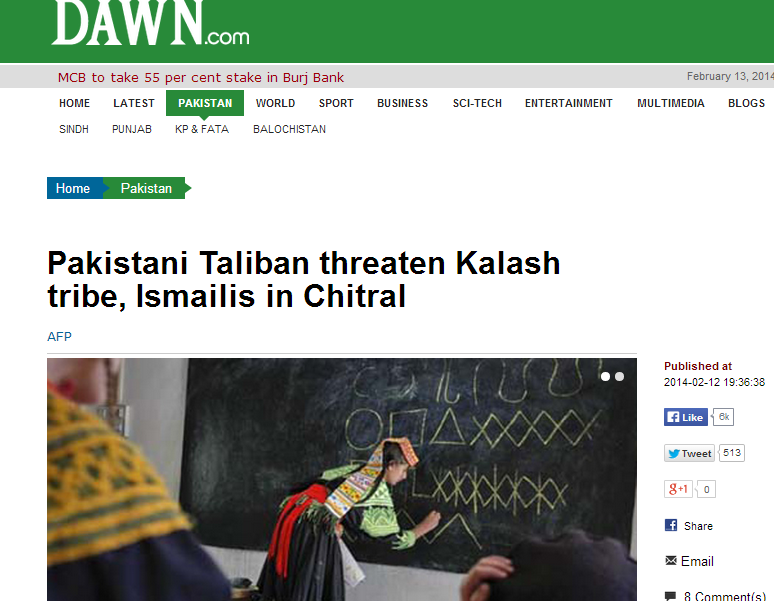 Pakistan’s top-selling English newspaper Dawn’s coverage of the threats faced by the indigenous Kalash tribe and the Shia Ismailis at the hands of the Deobandi Taliban is an example of how the media supports extremism by obfuscation. (http://www.dawn.com/news/1086564/pakistani-taliban-threaten-kalash-tribe-ismailis-in-chitral)

It once again shows how Pakistan’s media is a major contributor to the success of the Deobandi Taliban and its local partner Sipah-e-Sahaba aka ASWJ.  Both the right-wing Urdu media as well as the pseudo liberal English media have overtly and covertly supported and promoted the narrative of the Taliban.

The article quotes the Taliban asking “Sunnis” to support them in their drive against the “Ismailis” and Kalash Tribe. Notice how Shia identity of Ismaili Shias and Deobandi identity of Taliban have been omitted by Dawn.  Dawn does not bother to educate the readers that Sunni Barelvis themselves are the victims of the Taliban, who primarily belong to the Deobandi sect.  In the ongoing debate in Pakistan, the Sunni Barelvi leadership has openly come out against the Deobandi Taliban and explicitly condemned the Taliban for the savage and medieval acts.

Similarly, DAWN conveniently omits to educate the reader on the fact that Ismailis are a Shia Muslim sect.

Why does DAWN describe Ismaili Shias as Ismailis while the Deobandi faith of the Taliban is conveniently omitted, and an obfuscating term Sunni is used?

Unfortunately in Pakistan, the so-called “liberal” English media and its civil society readership have actually spent the last few decades diluting or justifying the atrocities of the Taliban so how can one expect any integrity from them.

Shia Genocide by the Deobanid outfits (Sipah Sahaba and Taliban) is often justified by Pakistan’s media as a result of “inconvenience caused” due to lawful Muharram processions on public holidays.

Shia Genocide and Sunni Barelve genocide by Deobandi terrorits is also justified due to the criticism of Caliph Yazid by Shias and Sunni Barelvis during the occasion of Muharram.  Caliph Yazid, revered by Salafi-Wahhabis and Deobandis, murdered the Holy Prophet’s family, attacked the Kaaba and committed atrocities when his forces ransacked the holy city of Madina.

Shia Genocide is also misrepresented as “Iran-Saudi” proxy war by many of Pakistan’s English speaking Fake liberals while Sunni Barelvi genocide is not even mentioned.

Based on these ridiculous assertions, LUBP would like to ask these fake liberals the following questions:

Which Sahaba are the Kalash’s indigenous people criticizing?

Is the Ismaili Shias’ contribution to education and welfare also causing “civic problems” and “inconvenience”?

Is the persecution of the Kalash part of a Saudi-Greece Proxy War?