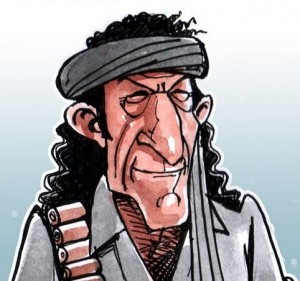 Editor’s note: The problem with Cyril Almeida’s analysis is that he has placed the entire blame on the right-wing (Deobandi hate clerics) and politicians (Nawaz Sharif etc, but Imran Khan in particular) but has completely wiped out another two main actors responsible for ascendancy of Deobandi terrorism/extremism in Pakistan today, i.e., the aabpara enterprise of Pakistan army, and the life-style urban upper- and middle-class that has practically constructed and enabled the Taliban Khan phenomenon. Without the support of hypocritical, opportunistic and superficial urban upper and middle class (from LUMS to the Binori Deobandi madrassa), Imran Khan too would have remained at the margins.

WE’RE already in the middle of it, so why not try and figure out the likely small print. Here’s an idea for the draft agreement:

“The Federal Government shall be under an obligation to take steps to enforce the Shariah, to establish salat, to administer zakat, to promote amr bil ma’roof and nahi anil munkar (to prescribe what is right and to forbid what is wrong), to eradicate corruption at all levels and to provide substantial socio-economic justice, in accordance with the principles of Islam, as laid down in the Holy Quran and Sunnah.”

Sound familiar? It should. That’s the operational part of the 15th Amendment that never was.

If you’re the conspiratorial or cynical sort, here’s a theory for the ages: the once-upon-a-time would-be amirul momineen is about to pull off the greatest political bait-and-switch this country, or perhaps any country, has ever seen.

Nawazul Sharif the amirul momineen. And this time, no one would see it coming — or even blame him for wanting it. It’s the TTP, stupid.

If only. If only that were true. The heart almost aches for it to be true. Anything but the tawdriness and ugliness of protecting Punjab over and above everything else. Amirul momineen would at least suggest a higher purpose.

No, there’s another villain in this piece. Imran Khan. Taliban Khan. The man who smashed this country on the rocks of extremism.

Oh, here we go again, the Khanistas will bleat. Blame Imran for everything. If a dog crosses a road, blame Imran. It’s not even Imran’s government, they will yell. He’s in charge of nothing.

All true. But that still doesn’t make him any less of a villain. In fact, precisely because he is in charge of nothing, he has the freedom to drag us all to ruin.

(KP is a bit prize that the PTI doesn’t even pretend to care about much; it’s Punjab the party really craves.)

The problem with Khan, the problem for all of us, is as simple as it’s ugly: he’s mainstreamed extremism.

Made it sexy, dressed it up, foisted it off on an audience that didn’t really understand what he is selling or why; packaged it as the little blue pill that will make all our troubles go away.

But without Khan, none of that wouldn’t be as mainstream as it is with Taliban Khan running around.

Let’s play a little game. Imagine there was no Imran. No Taliban Khan on the national stage, no handsome mug and mischievous eyes plastered all over the country and shipped inside every TV. There’s just Zia and his progeny.

So, the usual is playing out. The Taliban are blowing up stuff and themselves, kidnapping a few here and there, issuing their usual threats of taking over the country, etc, etc. Par for the course, really.

Nobody really knows what to do about it. The boys are still playing their games. The pols too weak and scared. The public confused.

Then in walk the original apologists, the political extension of the extremist set. The usual chappies: Fazlu, Jamaatis, Sandwich, et al. And throw in some of the latter-day saints, like Burqa Avenger, aka Abdul Aziz.

And they all have the same message: Taliban misunderstood; all they need is some love; all we — Pakistan — need is some Islam; and all will be good. And boo to the Americans and their evil plans.

Folk listen for a bit, folk yawn, folk go back to their business and have some chai and samosas and laugh about it all.

Those goofy chaps, folk tell themselves, always taking themselves so seriously and pretending nobody knows what they’re all about.

Extremism stays where it belongs: on the margins. Because there’s no one credible to sell it to the centre and the mainstream.

Until Imran. Taliban Khan’s greatest gift is his power of simplification.

Simplification allows you to obfuscate. And obfuscation sells to helluva lot more people than the direct approach — if what you’re selling is the right-wing.

Step five: Taliban are misunderstood, and deliberately so by a corrupt and unpatriotic ruling class that is beholden to self-interest and outside powers.

See how that works?

It mainstreams hate, bigotry and xenophobia without ever sounding hateful, bigoted or xenophobic. It’s all couched in the language of understanding and pain and transferring blame.

And boy, has it sold. That handsome mug, those plaintive eyes, that soft, colloquial Urdu, those open hands — an irresistible package hawking irresistible simplicities.

And just like that, it’s mainstream. Your high-school kid, your average housewife, your gent on a charpai, your trousered and shirted office 9-to-5-er, every one of them a little Khanista.

Drinking from the fountain of refreshing truth, oblivious to its source. Lapping up Imran. Lapping up Taliban Khan, the man who sold Pakistan.