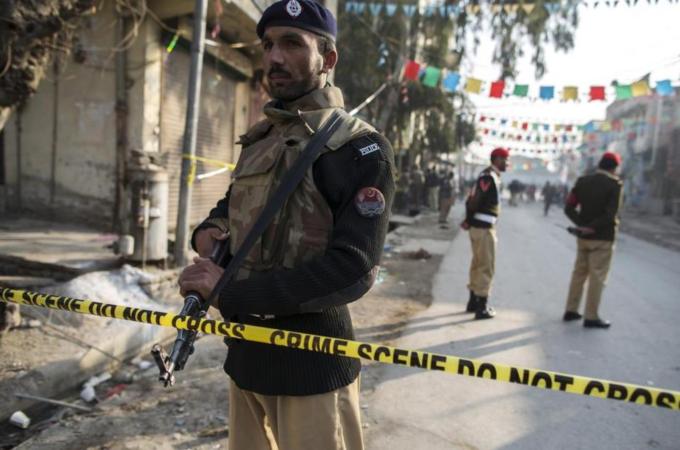 It was a quick call from my editor’s office in Karachi informing me not to bother writing anymore about the Tehreek Taliban Pakistan (TTP) or any other militant outfit, religious party or even the cricketer-turned-politician’s Pakistan Tehreek-e-Insaaf (PTI). I was told I couldn’t even mention Deobandi TTP and its other sister organisations. The call came in the wake of an attack on a vehicle carrying staff of a media group which killed three people and injured another four.

The TTP was quick to take responsibility. The spokesman of the militant outfit Ehsanullah Ehsan even appeared on a television program and warned the media group about giving the Deobandi TTP bad press. The channel’s anchor Javed Chaudhry had to promise a “balanced” representation of views about the militants and their agenda. Furthermore, Ehsan claimed the attack was an attempt to force Pakistan to meet the promise of imposing Sharia law in the country.

A day later on January 19, another 20 Frontier Corps (FC) soldiers were killed and about 30 injured in a suicide attack in Bannu Cantonment in the northern province of Khyber Pakhtunkhwa (KPK). This was followed by an attack on January 20 in Rawalpindi Cantonment near the Pakistan Army’s GHQ, bringing the death toll up to 33 and the number of wounded to 63. Not to mention the constant targeting of polio workersacross the country.

These attacks happen despite the civilian government’s claim to engage the Taliban in a dialogue to end the violence. The first attack on the television channel came the same day as the statement by the TTP spokesman announcing his group’s willingness to talk with Pakistan’s government as long as the latter ensured the implementation of Sharia law in the country.

Such statements, followed by attacks, tend to divide the country and society into two camps. While there are those who are frustrated by the government’s inaction against the Taliban, others have a similar feeling but for a different reason. A number of young men and women I spoke with in urban centers of South Punjab sympathise with the TTP rather than their own soldiers. Their reason, as one young woman stated: “What’s wrong with the Taliban asking for implementation of Sharia? If fighting is the only way they force the government to do what people want, then so be it.”

Islamabad reacted to the attack in Bannu with an aerial bombardment of North Waziristan. This reportedly killed a prominent Taliban commander, Adnan Rashid, a former soldier linked with the attack on Pakistan’s former President General Pervez Musharraf.

But many wonder if the attack on North Waziristan – considered a sanctuary for the Deobandi TTP – is enough to solve the problem. There are three issues in solving the problem of violent extremism in the country. First, there appears to be a lack of consensus on talking to the Taliban. While right-wing parties or others with a strong right-wing flavor like the PML-N and PTI support the idea of talking to the Deobandi TTP, others like Benazir Bhutto’s Pakistan People’s Party (PPP), the ethnic Awami National Party (ANP) and the Mutahida Qaumi Movement (MQM), contest the idea.

Second, even if a consensus were reached on talking to the Deobandi TTP, it is not clear what the government would negotiate. Will it agree to implement Sharia law in the country? Would Islamabad release about 4,500 imprisoned militants as per TTP demand a few months ago? Or will the government find a way to stop American drone attacks in tribal areas?

Third, if a method were found to fight the Taliban, then a larger problem would be that of not having the capacity to do so. Here, the notion of capacity does not refer exclusively to the military’s physical capability but also the aggregated will of the nation to fight militancy and wipe out violent extremism from the country. The gradual strengthening of the right-wing ideology in the state and society hampers the ability to udnertake such a battle.

The militancy problem has grown far bigger than imagined. The two main parties at the moment, which made gains in the 2013 elections – the PML-N and PTI – have militant sympathisers in their ranks at significant levels. The Punjab government is even known for paying militant madrassas from the government exchequer. The PPP and the MQM in Sindh vociferously condemn violent extremism.

However, they suffer from a shallow assessment of the issue. Skeptics also point a finger at the judiciary, which is unable to punish those convicted of terrorism. Pakistan has a very low conviction rate, which some believe is not just out of fear, but because many judges are sympathetic to extremist ideology or such groups. Although it is popularly imagined that the army opposes talks with the Taliban, some sources claim there are TTP and “jihadi” sympathisers even within the armed forces.

In Pakistan, it is fashionable to say that the American and NATO withdrawal from Afghanistan will end violence in the country and the region at large.

However, it is no longer an easily solvable problem considering that militancy has numerous faces and is spread throughout the country – not just confined to the north. The provinces of Punjab and Sindh are rife with militant groups popularly labeled as Punjabi Taliban. Insider sources believe that at least two to three groups act as state proxies.

Allegedly, some of their breakaway factions have turned against the state like the Deobandi Sipah-e-Sahaba Pakistan (SSP),Deobandi Lashkare Jhangavi (LeJ) and Deobandi Lashkare Khorasan (LeK). Due to the absence of a clear policy, coupled with the complicity of the state, these groups and many other factions have now spread far and wide. Traveling around the country and spotting extremist elements, it comes as a surprise to see the police and intelligence holding back from cracking down on these elements. The police, whose information is mostly collected through human intelligence, feel frustrated over their inability to electronically monitor the movement.

For one, the police cannot intercept and track phone calls or Internet communication. The military intelligence that has this capability refuses to share it. The Nawaz Sharif government seems to be working on a new counter-terrorism policy which is inherently flawed. The new approach aims at disbanding the existing structure and creating a new one which many believe might not deliver.

Replacing police officers with army personnel is not likely to help eradicate violent extremism. Meanwhile, militants continue to kill and threaten. They attack religious minorities including Shias, and do not even spare the majority Barelvi sect. In the past month, there were two incidents of dead bodies found near Sufi shrines in Karachi with a warning that people must stay away from such places. On January 21, a renowned playwright, Asghar Nadeem Syed, was shot and wounded in Lahore. He was probably not killed in order to serve as a reminder to other Shias and the larger population that the state of Pakistan must now prepare to become an ideological theocracy.

Ayesha Siddiqa is an independent social scientist and author of Military Inc: Inside Pakistan’s Military Economy.

7 responses to “Pakistan’s march to theocracy – by Ayesha Siddiqa”