Home  »  Editorial • Featured • Original Articles   »   Editorial: Sectarian murder of the CEO of Syed Technologies in Lahore and the media’s denial of Shia genocide 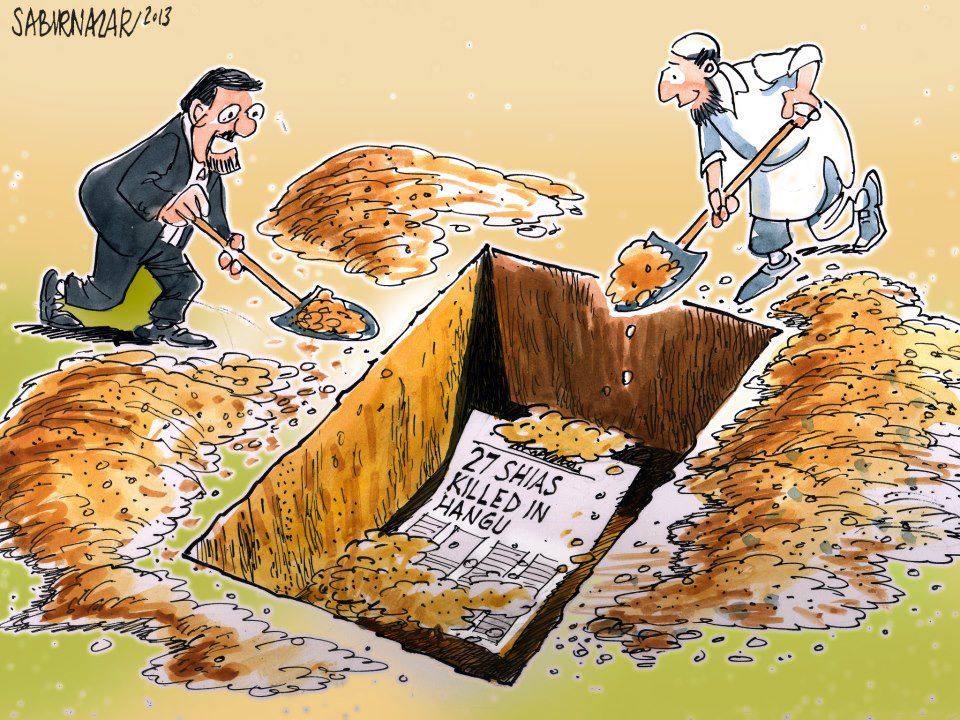 On Thursday afternoon, 16 January 2014, Syed Ali Hussain Qazilbash, the CEO of Syed Technologies, was gunned down near Firdous Market, one of Lahore’s main commercial areas.  Two assassins on a motorbike approached his car and shot him multiple times, and escaped. He died immediately. It was yet another assassination of an educated Shia. Qazilbash’s family, friends, and a number of Shias called it a purely sectarian killing. 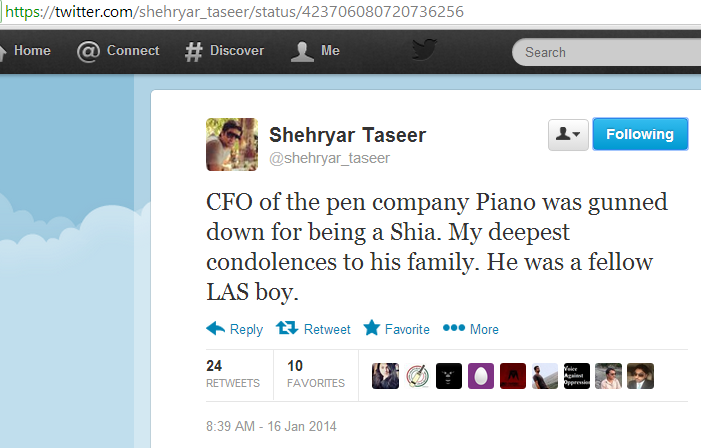 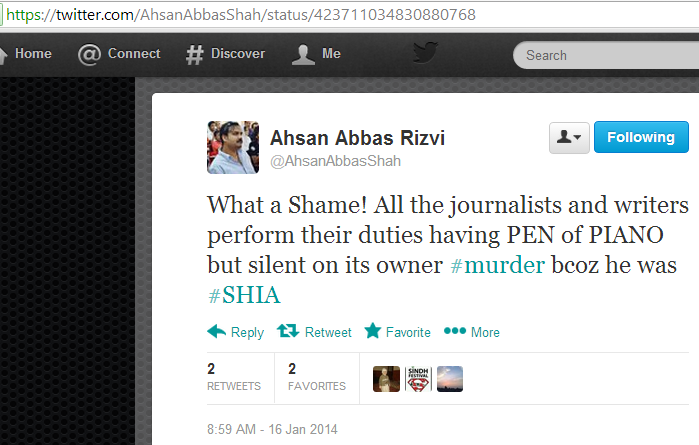 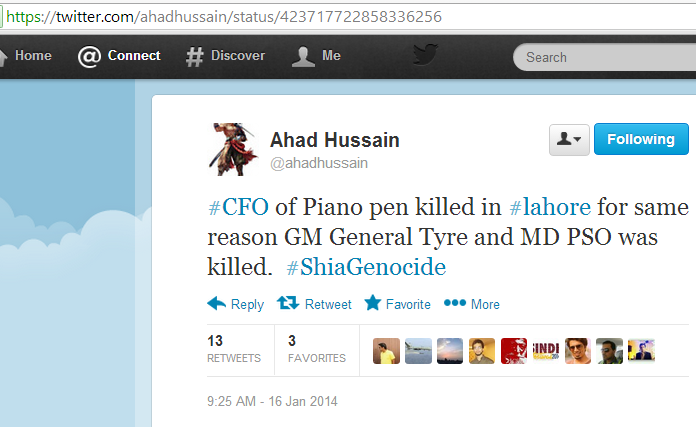 But the Pakistani media once again went into an overdrive trying to hide all facts, even informed conjectures, about it. For instance, all major Urdu newspapers — Jang, Dunia, News Express, and Nawa-e-Waqt — blacked it out. Thus, to the readers of these newspapers, no one—let alone a Shia—was killed because it was not reported to them.

Pakistan’s major English language newspapers—excluding Express Tribune—reported the killing, but they denied that it was a sectarian/Shia killing. Only one newspaper alluded to it in sectarian terms, but did so in a way which can be read as either justification or obfuscation of the killing. Let us start with The Nation, Pakistan’s right-wing English daily.

The Nation reported the killing of Qazilbash in its inner city page with the headline, “Man dies in Lahore drive-by shooting.”

The headline is a run-of-the-mill type. Just a man “dies” in a drive-by shooting, and nothing else happened. In the Pakistani context, an average reader will not read the report at all because drive-by shooting is not an extraordinary incident. More importantly, The Nation is careful not to give much significance to the report because the shooting did not kill anyone. A “man” was not killed at all.

To die is more in the nature of natural death. Since The Nation did not mention the killing, no one was killed, but someone nameless—“Man”—died. The headline does not set a stage for an act of violence despite the noun phrase “drive-by shooting”. Here two more observations can be made. First, the headline uses the intransitive verb “dies” to explicitly lay it down that the “Man” was not subjected to any violence. When one dies, one dies naturally, on his own. It is only verbs like “kill” and “murder” which establish agency, i.e., killer/murderer. But in the case of Qazilbash, there is no such agency. Qazilbash died on his own.

As can be seen, “shooting” has the lowest number of combinations compared to words like “sex” and “shopping”. But this combination is not the only mala fides use of the expression. “Drive-by shooting” often occurs when both parties involved are criminals and/or gangsters. For instance, in Sanders’ words, “A drive-by shooting occurs when members of one gang drive a vehicle into a rival gang’s area and shoot at someone” (Sanders, 1994: 65). Hutson and Strote define it as, “One of the most common violent acts committed by street gangs is the drive-by shooting, defined as gangs members shooting at suspected rival gang members from a vehicle” (2009: 841).

Thus, another layers of The Nation headline’s implications is that the “drive-by shooting” was part of some gang war, and not an instance of the Shia genocide.

I am aware that I can be blamed for paranoia for claiming that The Nation report headline has categorized the killing of an innocent Shia as a part of a criminal gang war. One may say: Where is the evidence that the headline incriminates Qazilbash, an innocent Shia? My answer is: the gang war implication of the headline is explicitly elaborated by the report which follows the headline. But before I come to this point—i.e., the evidence—I would like to point out the strategies used by The Nation report to deny that Qazilbash’s killing was an instance of the Shia genocide in Pakistan.

The report begins with the following sentence,

In what appeared to be another sectarian attack, a 35-year-old Charted Accountant was killed in a drive-by shooting at a traffic signal near Firdous Market in Gulberg area on Wednesday night, police said.

The syntax is curious. The report—i.e., The Nation—distances itself from the nature of the killing—sectarian—by attributing all facts about it to the police. But, curiously, “In what appears” is not the statement of the police, but that of the reporter/report. Thus there is a double distancing here. This is fair, and one need not take up cudgels with the report/reporter on this point. But what is interesting is that the report even distances the police officer from the killing by not quoting or naming him, but by using the general, and in this context empty, word “police”.

This distancing in the very next sentence of the report becomes a subtle denunciation of Qazilbash: “Ali Hussain Qazilbash, an active member of the Shiite community, was on his way home when unidentified motorcyclists ambushed his Honda-civic car at a traffic signal near the Firdous Market.”

Read with the headline, this sentence makes it clear that in a gang war, an “active” member is bound to be visited by the rival gang in a “drive-by shooting”. Having said this, it is important to note that this piece of information provided by the report is a blatant lie as Qazilbash was not an “active” member of the Shia community. What was he active about? The report does not point it out, but this attribution of being a Shia activist lends a subtle justification to his killing.

Next, the report has this to offer its readers by way of the evidence I have referred to above,

There is no respite in sectarian violence in the Punjab metropolis as the police are unable to hunt down the killers behind such attacks. Security experts say sectarianism should be taken as a serious threat and the government must deal with it strictly. In December, Ahle Sunnat Wal Jamaat provincial chief Maulana Shamsur Rehman Muavia was assassinated in a drive-by shooting near Ring Road when he was on his way home after Friday prayers.

Gunmen on motorbikes shot and killed a 45-year-old professor of ophthalmology and his 12-year-old son in Lahore’s posh locality of Gulberg in a similar sectarian attack in February last. In May, Sunni Tehreek leader Khurram Qadri had been shot dead in Samanabad area of Lahore.

Yes, Qazilbash “dies” because there has been no respite in the sectarian violence—gang war. The murder of Qazilbash, a professional, is equated with the murder of a notorious terrorist like Muavia who was involved in a number of Shia killings. Qazilbash’s murder is equated with the killing of Qadri too who was a politician. The Nation plays foul on another count too. Whereas Ahle Sunnat Wal Jamaat and Sunni Tehreek clearly identify Muavia and Qadri as a Deobandi and Brelvi, respectively, “opthamology” has no sectarian information to offer.

Grammatically, the indefinite article “a” does not, and cannot, identify a thing or person (In a slightly different but relevant context, Burchfield defines the letter “a” as “a prefix of privation or negation.” See, Burchfield, 1: 1996). Precise to perfection in giving details—45-year-old professor of ophthalmology and his 12-year-old son in Lahore’s posh locality of Gulberg—and yet equally denying the Shia genocide, The Nation does not want its reader to know or remind that the nameless, unknown “a” 45-year old professor and his son were no other than Pakistan’s top ophthalmologist Prof Dr Syed Ali Haider and his son. The professor and his son, both Shias, were shot multiple times in their faces by Deobandi assassins who later proudly claimed having killed “infidel father and son” and promised to continue to kill Shias.

Dawn which claims to be a balanced newspaper founded by Muhammad Ali Jinnah, a Shia, reported the news of Qazilbash’s killing with the following headline: “Chartered accountant gunned down”. Like The Nation, Dawn also distances itself from the killing of Qazilbash. It quotes the police to tell its readers about the victim. “Police said,” the Dawn report paraphrases the killing, “the victim’s head and neck received bullets.”

This is a very curious way to report a blatant killing of an innocent person. The Dawn report makes the killing almost a voluntary act. Like one courting arrest. No one was killed, if the Dawn report is to be believed. It was not even Qazilbash who “received” the bullets. Indeed it was his head and neck which were the recipients of bullets. The use of the active voice says it all. Neither was Qazilbash hit/shot nor his head or neck. The victim’s head and neck—yes a nameless victim—received bullets as if those were a trophy of some sort received with volition and gratitude.

Finally, citing the police, the Dawn report tells its readers that it was “premature to initially establish the motive for shooing, but police were working on all possible angles, including target killing and street crime.” Thus Qazilbash’s killing is reduced to a possibility—a mere possibility—of a street crime.

(Read the report: http://www.dailytimes.com.pk/punjab/16-Jan-2014/man-killed-chinese-national-injured-in-armed-robbery)
A paper known to be the most progressive English language daily of Pakistan, Daily Times’ report conflates a “Man killed” with Qazilbash’s killing with a “Chinese national injured” in its  headline, which says: “Man killed, Chinese national injured in armed robbery.”

A nameless man killed and a Chinese national injured have been given equal semiotic value in the headline. Besides, the headline denies that the “Man” was killed as a result of a sectarian attack. It appears that an armed robbery resulted in the killing of a man and the injury of a Chinese national.

After denying that a “man” was killed as a result of a sectarian attack, the report opens up with a mind-boggling comment by way of the background to the killing,

The incidents of target killing and robberies are increasing in the city, as another 40-year-old chartered accountant of a private company was shot dead by unidentified motorcyclist in Firdous Market, Gulberg, while a Chinese businessman received bullet injuries during resistance when robbers deprived him of Rs 2 million in the Qilla Gujjar Singh police area on Wednesday. In the first incident, the deceased was identified as Ali Hussain Qasalbash of the Cantonment area. The investigation officer said that the victim was on his way in a car when two motorbikers approached him in Firdous Market and opened fire on his car.

The Daily Times observes that target killing and robberies are on the increase. But who is being targeted? On what basis? The rest of the report does not say a word about Qazilbash’s target killings; it is devoted to Lee Ong Fung who fought bravely and got injured while resisting robbers. The Shia identity of Qazilbash is wisely concealed so that no one can say it was an act of sectarian attack. . . .