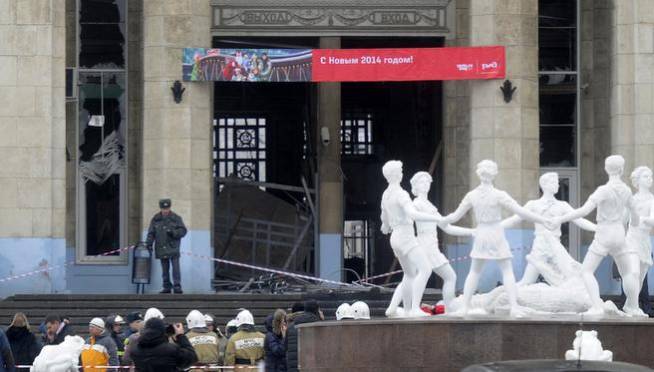 In two days, two suicide bombers struck a train station and a bus, respectively, in the city of Volgograd in Russia leaving at least 30 men, women, and children dead, and dozens hurt.

http://www.reuters.com/article/2013/12/30/us-russia-blast-trolley-
idUSBRE9BT03N20131230)
But the number of the dead and the injured is miniscule if you put the suicide bombings in their proper perspectives. Russia is no stranger to violence carried out by the Islamofascists. In North Caucasus, these Islamofascists are known as “Afghanis” and “Wahabis”. The violence in Chechnya only a few years ago was far worse than what is happening in Russia now. But what makes the Volgograd bombings of utmost gravity is the Saudi stamp on them. It was only a few weeks before when Prince Bandar met President Putin and tried to manipulate him into acquiescing in the Saudi wish to replace Syrian President Bashar by the Takfiri (Salafi/Deobandi) groups. Prince Bandar began by doing what the Saudis have done all along: Offer bribe.

Yes, first Prince Bandar tried to bribe President Putin into becoming a Saudi complicit against President Asad by offering to buy Russian weapons worth $15 billion. Then, as reported by the London-based Daily Telegraph, he made another move to entice President Putin.

Let us examine how to put together a unified Russian-Saudi strategy on the subject of oil. The aim is to agree on the price of oil and production quantities that keep the price stable in global oil markets. . . . We understand Russia’s great interest in the oil and gas in the Mediterranean from Israel to Cyprus. And we understand the importance of the Russian gas pipeline to Europe. We are not interested in competing with that. We can cooperate in this area.

But President Putin refused to be bribed. At that Prince Bandar threatened him saying, I can give you a guarantee to protect the Winter Olympics next year. The Chechen groups that threaten the security of the games are controlled by us. . . . These groups do not scare us. We use them in the face of the Syrian regime but they will have no role in Syria’s political future.

To this threat, President Putin responded, We know that you have supported the Chechen terrorist groups for a decade. And that support, which you have frankly talked about just now, is completely incompatible with the common objectives of fighting global terrorism that you mentioned. We are interested in developing friendly relations according to clear and strong principles. . . .

Our stance on Assad will never change. We believe that the Syrian regime is the best speaker on behalf of the Syrian people, and not those liver eaters.” referring to the rebels.

After this, the meeting was over. But it is safe to claim that the Saudis began to plot attacks on Russia to teach President Putin a lesson. In this respect, the New York Times article of Prince Mohammed bin Nawaf bin Abdulaziz al Saud, Saudi Arabia’s ambassador to Britain, is instructive. Titled, “Saudi Arabia Will Go It Alone,” the article starts with an ominous We believe that many of the West’s policies on both Iran and Syria risk the stability and security of the Middle East. This is a dangerous gamble, about which we cannot remain silent, and will not stand idly by. Without substantiating any claims against Iran and the Syrian government made in the article,

Prince Mohammed threatens,We will act to fulfill these responsibilities, with or without the support of our Western partners. Nothing is ruled out in our pursuit of sustainable peace and stability. . . .

Saudi Arabia will continue on this new track for as long as proves necessary. We expected to be standing shoulder to shoulder with our friends and partners who have previously talked so much about the importance of moral values in foreign policy. But this year, for all their talk of “red lines,” when it counted, our partners have seemed all too ready to concede our safety and risk our region’s stability.

This is precisely what Saudi Arabia seems to have done now. The 1979-88 Jihad against the Russians was a Saudi-US adventure. But now emboldened by its money and its control of the terrorists—be they the Al-Qaeda, the Taliban, ASWJ-LeJ, or Al-Nusra—the Saudi Royal Family has kicked off Jihad No 2 against the Russians in which there is a message to London and New York about the Saudi power to wreak destruction. But whether the Americans will understand it or not is another matter. The 9/11 destruction was a purely Saudi-Salafi adventure. But the United States did nothing to punish the Saudis. But in the case of Russia, it should be a different matter. The Volgograd suicide bombings follow Prince Bandar’s threat to President Putin, and it is clear that the House of Saud has made good on its promise to teach the Russians a lesson.

Will the Russian government act? If history is any guide, Russia may not act against Saudi Arabia. In Dagestan and Ingushetia, the Takfiris have been carrying on a campaign of terrorism and assassinations against the Shias and Sufis, but the Russian government hasdone nothing noteworthy in this respect. At least, the world does not know if the Dagestan-Ingushetia terrorists have met the fate of their Chechnya brethren or not. Justice should not only be fast, it should be visible too so that the terrorists will know that they will be dealt with firmly for their mischief.

Russia must confront Saudi Arabia on every front possible. The Russian government should move the UNO in the backdrop of Prince Bandar’s threat. President Putin should also raise the issue of the Saudi support to Chechen terrorists. Russia should pull its diplomatic staff out of Saudi Arabia. If the Russian government shows any sign of procrastination, it will regret it in the future. Saudis are agents of misery and destruction in the Muslim world. Their tentacles will prevail all over the world if they are not stopped now. If it is Russia today, tomorrow it will ca be any other country.