In a blood-soaked Ashura this year, the mourners in Rawalpindi reacted worthily to make sure that blaring Yazid’s eulogies in the ears of Imam Hussain’s mourning processions does not become an acceptable practice in Pakistan.

Following that, Takfiri Deobandis gave vociferous calls to their cohorts to rally and thwart the Chehlum Procession in Rawalpindi. In this backdrop, Ralwapindi’s Chehlum procession this year epitomized all that is inspiring, touching, and motivating about “Azaa e Hussain”.

When several hundred thousand gathered in a congregation that usually numbers less than ten thousand, it was not an act of defiance. It was way beyond that. It was an act of HONOUR. An act to honour the martyrs of Karbala and an act of honour for a beleaguered minority in a country which it, more than anyone in proportion, helped shape and create. It was a determined act to show that we can sacrifice everything but will not give up the right to commemorate the martyrdom of Imam in a manner any lesser than we did in the same towns and neighbourhoods before we helped make this country.
Chehlum of the martyrs of Karbala marks an extremely important occasion for us.

When the family of the Prophet were released from the prison in Damascus and they left for Karbala, Lady Zainab decided that litters on camel backs should be covered in black so that people would know the travelers were in mourning. This was the first Chehlum procession taken out by the mourners of Imam Hussain. That’s why we, when we can, walk hundreds of kilometers to pay homage to our Imam on the day of chehlum.

Seeing thousands of women clad in black chadors, who stood out in a mass of mourners chanting ‘Labaik Ya Hussain’ on the day of Chehlum, reminded me of the moment when Ahlyl Bait’s caravan reached back Medina after Karbala. When the city was in sight Syeda Zainab bade the women to alight from their camels and pitch their tents. Black flags were raised. On learning of their arrival the people of Medina came out in droves, and Syeda Zainab recounted to them the events at Karbala and the hardships of their subsequent captivity.

When Syeda Zainab decided to enter the city, they walked on foot with black flags raised aloft.

It must be acknowledged that the law enforcement agencies and the Government of Punjab did a good job on this occasion. 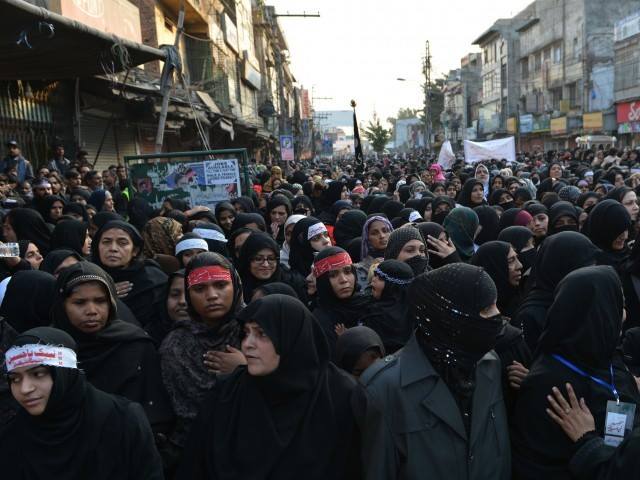