Lamenting the Murder of Nasir Abbas of Multan – By A Z 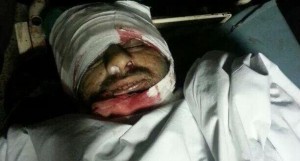 Nasir Abbas spoke with great passion. On a couple of occasions that I met him, what I admired the most was his energy. The main characteristic of his oratory, to my way of thought, was that it embodied ardent longing of a man intoxicated with the love for the Prophet (PBUH) and his Ahl al Bait to rise above himself and serve his beloveds. He is now headed to join the service of his masters in his eternal abode. This young man was mercilessly shot dead by the beasts of Sipah e Sahaba on this last Sunday evening in Lahore. While remembering this young man, I am not competent to talk about the worth of his oratory. Mine is a humbler task. I will comment on Nasir Abbas’s role in the historic mission of ‘Hussainiyat’ from a personal standpoint. It is impossible for me to be a detached spectator at the murder of this young man from Multan in the prime of his earthly existence. Hence, I write with gaze in the direction of tear-bedewed eyes of five small daughters, one young son, a grief-stricken widow, and a family whose existence revolved around the sun called Nasir Abbas.

Nasir Abbas was essentially a speaker of love and longing. His longing to unite with his leader Imam Hussain has been granted by the God. In his speeches, he was never weary of emphasizing the need of obeying Imam Hussain’s call for help. His discourse effectively portrayed the experience of a man devoted to Imam Hussain’s mission. His speeches bore a testimony that the primary purpose of a Hussaini’s life is to acknowledge the truth nourished by the Imam with his blood in Karabla – the truth of the words of Holy Quran: “We are for God and to Him is our return”. His speeches articulate in simple language the aspirations and intuitions of the soul of every true follower of Imam Hussain. Little did we know that his speech will so resoundingly become the mouthpiece of his own destiny. In hindsight, I can see that while talking about the risks to his life his face would glow with a meaning and significance one could hardly sense then.

As a zakir, Nasir Abbas’s method of expression was direct and effective. He always spoke for Shia and Sunni unity. The unity of Ummah around the unrivalled greatness of the Prophet (PBUH) and the imperative of unconditional love for his progeny was a never-ending refrain of his speech. He was from the school that unifies around ‘Hussainiyat’ by taking Karbala as a symbol and example and expresses through it the moral, ethical, noble, and mystical aspects of the spiritual life of man which constitutes the essence of higher human existence in all philosophies and religions. In that he was a spokesperson for the universal and timeless message of Imam Hussain. It’s impossible for me to convey within this piece how the pattern of our spiritual relationship with God and Truth is woven in stories of Karbala. Karbala breathes a transcendental significance in our daily existence. But I am saddened that an effective voice of Hussainiyat has been snatched away from us by the terrorist Sipah e Sahaba, which –along with its cohorts like LeJ, TTP, AWSJ etc- is in the process of perpetrating a Shia Genocide in Pakistan.

According to the teaching of Islam, ‘Everything returns to its source’, and the belief is that when one lives the life of continual devotion and longing, one qualifies oneself for being restored to that source of longing. Hence, I am convinced that Nasir Abbas has been restored to the majestic presence of his and our beloved Imam Hussain. A Hussaini martyr is a pilgrim whose progress is verily a home-coming of the spirit, the return of the obedient servant.

I would like to conclude by quoting these outstanding lines of Hafiz in order to offer my homage to Nasir Abbas – the latest victim of Shia Genocide in Pakistan:

O’Cup bearer, I am overwhelmed by your benevolence

You serve with a cup that is full and I return it emptied. 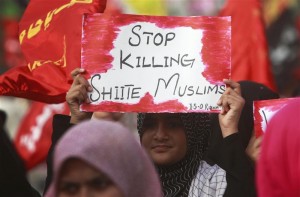