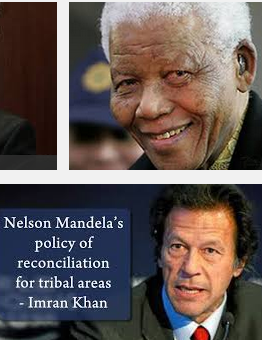 “Irony / hypocrisy: Those who obfuscate or remain silent on persecution of religious or ethnic minorities are shedding tears on Mandela’s death. They remain silent on or obfuscate the sufferings of Balochs, Pashtuns, Shias, Ahmadis, Christians etc, but are paying tribute to Mandela?”

This status by a former LUBP editor caught my attention. It summarized the hypocrisy of Pakistan’s urban elite and their crocodile tears on the passing away of the great Nelson Mandela.

How can those who have remained silent on the brutal suppression of Baloch nationalists by the Pakistan Army have the audacity to pay tribute to Nelson Mandela? On any given day, Mandela would have stood in solidarity with the Baloch!

How can the supporters of right-wing pro-Taliban parties (eg PTI, JI, PMLN) eulogize Mandela while also praising their vile, lying and hypocritical leaders?

Nelson Mandela is everything that the Taliban apologist Imran Khan is NOT! Mandela and Khan both stand at opposite ends of the spectrum. Mandela opposed the Apartheid regime and system that separated South Africans on the basis of colour. Imran Khan is an apologist for the system of (anti-woman, anti-SunniBarelvi, anti-Shia and anti-minority) apartheid practiced by the Taliban. Mandela, unconditionally and clearly, condemned Al Qaeda’s 9/11 terrorists attacks on the U.S.A. and supported U.S.A.’s surgical operation against Taliban and Al Qaeda terrorists. In contrast, Imran Khan continues to justify and rationalize all acts of terror by the TTP (Taliban) and affiliates (ASWJ-SSP).

One can see many Pakistani urban, liberal elites sharing facebook statuses in support of Nelson Mandela. Again, they are the polar opposites of the values of truth and resistance that Nelson Mandela stood for.

As Christain churches, Sunni Sufi, Ahmadi, Shia mosques and Sufi shrines are under constant attack by the interconnected Takfiri Deobandi groups like the Taliban and Sipah Sahaba, the role of Pakistan’s (fake) civil society and urban chattering class is despicable.

For example, there are characters like Dr. Haider Shah, founder of the so-called Rationalist Society of Pakistan (a facebook page), who instead of identifying the perpetrators (ASWJ), advocates for an end to the religious freedom of Sunni Sufi and Shia Muslims and Hindus and their right to commemorate the sacrifice of Imam Hussain at Karbala. Refer to “Dr Haider Shah: Rationalizing Prejudice” https://lubpak.com/archives/294005

Sadly, Dr. Haider Shah is only one of numerous examples and cases of Pakistan’s hypocritical and deeply bigoted Fake Civil Society who echo the words of terrorist hate mongers like Ludhainvi. Nelson Mandela opposed apartheid in South Africa while Pakistan’s urban elites (posing as liberals) stand behind the Takfiri Deobandi drive to create an Apartheid against the Sunnis and Shias.

Nelson Mandela was inspired by Gandhi who in turn was inspired by Imam Hussain. Nelson Mandela would have stood with the Sunni, Shia, LGBT and Hindu processions for Imam Hussain. Like he opposed Apartheid in South African, Mandela would have opposed hate mongering terrorists and supremacists like Ludhainvi Deobandi of ASWJ-LeJ whose goal is to cage and eliminate Pakistan’s Non-Takfiri Deobandi majority. He would have appreciated the essential symbol of Resistance and Protest that forms the core of Azadari for Imam Hussain. Unfortunately in Pakistan, its elitist Fake Civil Society stands with Ludhainvi’s agenda of curbing Muhurrum.

Many of these urban elites already support an apartheid against Pakistan’s poor and working classes anyways. They idolize corrupt, Islamofascist and Pro- Rape Judges like the current CPJ Iftikhar Chaudhary. Truly, then, it is an insult to the senses to see the same compromised fake civil society shed crocodile tears for the Great Nelson Mandela.