This refers to the one sided and insensitive polemic on Rawalpindi Ashura violence (in Viewpoint Online) by Dr. Haider Shah, an academic who also introduces himslef as a founder of a facebook page namely, Rationalist Society of Pakistan.

By removing the context and omitting crucial facts about the pre-planned attack by Deobandi terrorists on Sunni Barelvi and Shia participants of the Ahsura procession in Rawalpindi, Dr Haider Shah converges with the agenda of the Sipah Sahaba Taliban (ASWJ-TTP). http://www.viewpointonline.net/site/component/content/article/37-columnnews/3509-mayhem-in-rawalpindi-who-did-it.html

Dr Shah claims to be a rationalist Muslim and poses as a non-sectarian, non-religious person but seems to be unable to overcome the ShiaPhobia, which is abundantly found in Wahhabi and Deobandi fanatics.

In his recent article in Viewpoint Online, Dr Shah’s arguements are vague and shifty and he lays the onus of responsibility on the victims and not the perpetrators.

No admission of the fact that the attack on the Rawalpindi Ashura procession was pre planned.

Dr Shah fails to explain that the Eid Milad Un Nabi Jaloos is a happy festival but that too gets attacked by the same Deobandi terrorists who attack Shia Muslims.

Hindus who barely have any temples left outside of interior Sindh were attacked and their bodies dug out by the Sipah-e-Sahaba (ASWJ-SSP).

Same terrorits attack Christains everywhere, including the recent massacre in Peshawar. Was that too an outcome of Sunni-Shia sectarianism? Was the Sunday Service in Church too a mourning and dividing event?

Dr Shah’s analogies are subjective, nonsensical and intellectually dishonest! He reveals his true prejudice in his endorsement of terrorist hate monger leader of the ASWJ-SSP, i.e., Ludhianvi.

So a terrorist group who has murdered over 100 doctors, denied medical treatment to Shias, suicide bombed hospitals and whose TTP partners blow up hundreds of schools have the audacity to talk about denying Muhurrum processions security and divert funds to the very sectors (health, education) that they have destroyed!

If it was not for ASWJ-TTP, we would not need security!

In his article Dr Haider Shah discredits the entire Muharram for being a failure in bringing people together. His indirect plea is to ban Muharram. In his words: “As a rationalist I view any ritual in its entirety in terms of its social costs. Various faith communities celebrate rituals and festivals as a manifestation of social bonding. These rituals bring moments of happiness and social cohesion and hence play an important part in promoting stability and order. The rituals associated with Muharram unfortunately don’t play this role.” 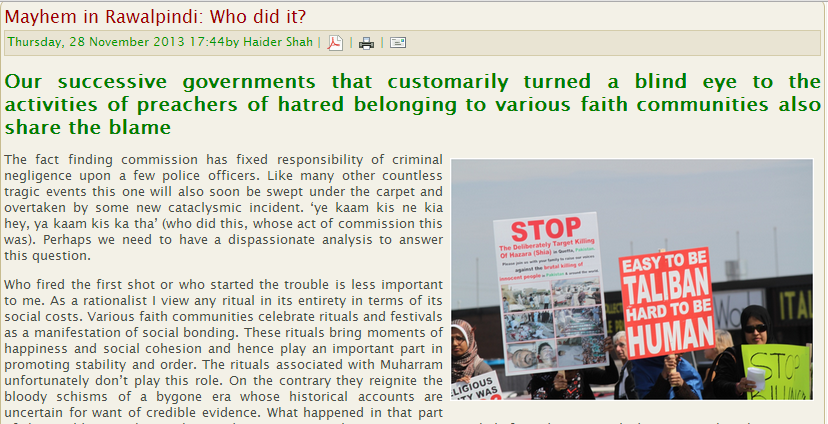