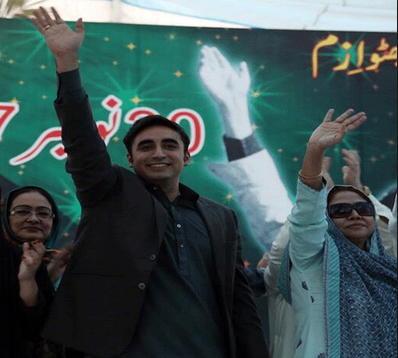 Forty-six years ago, when the Pakistan Peoples Party (PPP) was founded on 30 November 1967, it were genuine and universally respected progressive intellectuals who stood behind Zulfiqar Ali Bhutto when the latter made a speech outlining the PPP manifesto based upon Roti, Kapra aur Makaan for every Pakistani: Food, Clothing and Shelter. Those days there were only a handful of newspapers, and given the then government’s anti-PPP stance, the news of the foundations of the PPP was given very little coverage. But still, every Pakistani knew that a new party had been founded which had a pro-people agenda.

On 30 November 2013, history repeated itself in a most inane way. Despite the profusion of print and electronic journalism, and the ubiquitous social media, the 46th anniversary of the PPP was almost a non-event. It was just one of the news items which did not stir any emotion, though it did trigger some flashes from the past. Forget the inanities of Bilawal Bhutto trying to ape Zulfiqar Ali Bhutto’s style. Forget his unbelievable claim that the PPP was still a party in love with the poor masses. Forget his sucking up to the Pakistan Army by referring to the bringing of the 1971-war prisoners from India. Forget also the senseless reminder that his mother was the first prime minister of the Muslim world (So what? What Muslim state honoured her for this?). Forget everything but one: Whereas it was Dr Mubashir Hassan who stood behind Zulfiqar Ali Bhutto on 30 November 1967, it was, this time, Sherry Rehman who lurked behind Bilawal Bhutto as he shouted claim after claim on stage of the theatre of the absurd set in Karachi. One of the claims: We will win the 2018 elections. This explains all. The PPP’s journey from Dr Mubashir Hassan to Sherry Rehman is the worst possible karma for a party. With the likes of Sherry Rehman, you do not need an executioner. All you need is an undertaker.

To call the PPP a national party today is an outrage unless one was cracking a joke. Since Shaheed Benazir Bhutto’s assassination, the PPP has singlehandedly undone all the good work its workers—ordinary and poor men and women—had done by sacrificing their lives and livelihoods. After taking over the government in 2007, the PPP laid waste to the Bhutto legacy without a pause in the name of ‘compromise for democracy’. Page after page can be written on it, but a few instances should suffice.

The most glaring instance of cynicism on the part of the PPP leadership was to restore Justice Iftikhar Chaudhry, the man who perfectly symbolizes the Islamofascist Deobandi-Wahhabi legacy of General Zia. In the beginning, the PPP leadership claimed that Justice Chaudhry could not be restored without an amendment in the constitution. Then Asif Zardari refused to restore him arguing that he had become “politicised”. When Nawaz Sharif launched a campaign to have the Justice restored, the PPP refused to budge. The Nawaz campaign was a non-starter. It was only the TV channels which showed the “masses” rooting for Chaudhry’s restoration while the fact is that there were only a few thousand “masses” on the streets. But then a telephone call from General Kiyani, and the PPP leadership chickened out and restored Chaudhry. After his restoration, Chaudhry ordered the Parliament to amend the constitution to his own liking (the 19th Amendment). Despite being the ruling and majority party, the PPP gave evidence of complete moral bankruptcy by giving in to the Chaudhry demand. It must have been an unprecedented incident in the history of modern democracy when a judge forced a sovereign legislator to give in.

Throughout its tenure, the PPP sucked up to the generals. Every demand made by them—including 1.6 billion rupees for extra-ordinary budget—were sanctioned without even a symbolic protest. But not a single rupee for the families of thousands of civilians killed by the Takfiri Deobandis of TTP-ASWJ-LeJ.

Yes, the PPP’s sucking up to the Takfiri Deobandis. And this is the aspect we at LUBP would like to argue about as the basis for writing the PPP’s obituary. Throughout its tenure and even now as the main opposition party, the PPP did all to strengthen the Takfiri Deobandis. For instance, it appointed a known woman-hater as the head of the Council of Islamic Ideology (CII). 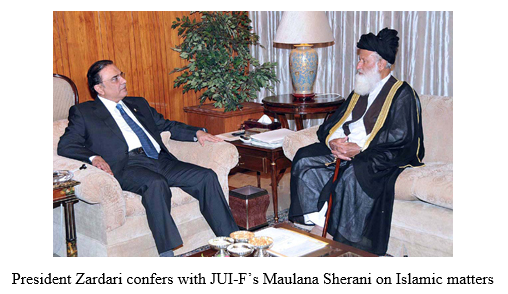 When it appointed Mullah Sherani, a Deobandi, as the CII head, Dr Rubina Saigol wrote: “It is important to examine some of the recent positions taken by Maulana Sherani specifically on the issues of women and morality. Sherani claimed that domestic violence was not a major issue in Pakistan until rights groups appeared and “created” it. He asserted that such legislation leads to greater chaos which precludes the creation of a ‘true Islamic society’.

Maulana Sherani fiercely opposed the sexual harassment bill and walked out of the House during its passage. His position was that only women who abided by an ‘Islamic dress code’ when they ventured out of their homes should seek protection. The senators belonging to JUI-F wanted an amendment to include the words “woman observing modesty in accordance with the teachings of the Holy Quran and Shariah”. Sherani and others argued that the legislation would enable NGOs to spread vulgarity in society” (Read: http://tribune.com.pk/story/23020/an-abusive-marriage/. Also read: http://www.dailytimes.com.pk/default.asp?page=2010%5C07%5C01%5Cstory_1-7-2010_pg3_3).

The PPP government’s next step was to appoint another pro-Taliban Deobandi cleric as a member of the CII. This time it was no other than Mullah Ashrafi, a close friend of the notorious Shia-killer Malik Ishaq, the same person who incited to violence against none other than PPP’s own federal minister Shaheed Shahbaz Bhatti. 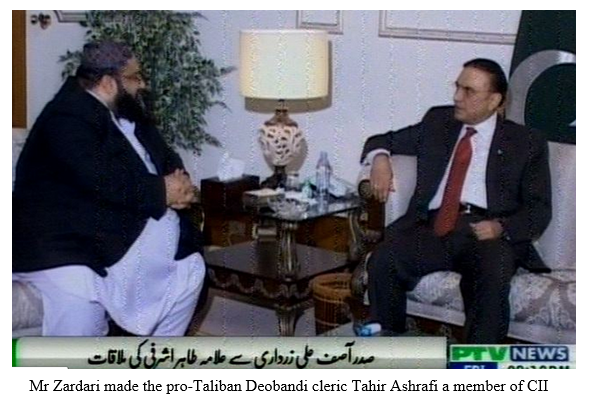 Ashrafi is notorious for hating the Sunni Barelvis, Ahmadis and Shias and has been justifying violence in the name of Islamic Deobandi Sharia (Read: https://lubpak.com/archives/240705). 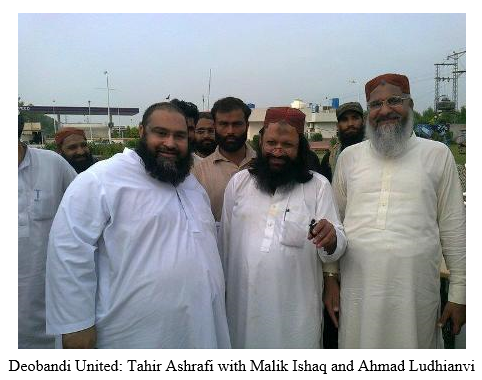 This is not all. It was during the PPP rule that some of the worst incidents of the Shia genocide took place – in Quetta, Karachi, Parachinar, Gilgit-Baltistan etc. But the PPP took no notice. Every time there was a Shia carnage or an attack on Sunni Barelvi shrines by Deobandi terrorists, President Zardari’s spokesman said, “Muslims cannot do this”. Period. It was during the PPP government in Sindh that Deobandi ASWJ-LeJ terrorists Malik Ishaq would freely fly to Karachi and provoke Takfiri Deobandis to kill more Shias, Sunni Barelvis, Ahmadis and Christians. Today when the PPP rules Sind, the likes of Aurengzeb Farooqi (Deobandi cleric) openly spit venom against the Shias, Ahmadis, and Sunni Brelvis, but the PPP government has never taken action. It seems to have given a free hand to the Takfiri Deobandis. Hindus girls are routinely abducted and forced to convert to Sunni Islam in Sind, but the PPP government has taken no action. Throughout Pakistan including the province of Sindh the PPP has been making alliances with ASWL-SSP-LeJ to win seats. In the parliament, the PPP has given its unqualified support to the APC to negotiate ‘peace’ with the Taliban terrorists. It is the PPP leadership which has called for a parliamentary session to condemn the American drone attack in Hangu which killed notorious Taliban terrorists.

All this leads to just one expression: Loss of character. Winning or losing an election is immaterial because this is a fact of life. But it is the loss of character which makes or mars a party or a leadership. The PPP leadership today has lost its character. To stay politically viable, it has gone to any extent. It calls its loss of character “compromise for democracy”. It appears that in future the PPP will be an adjunct of the ASWJ-SSP-LeJ. It can regain some ground in Punjab if it appoints Malik Ishaq its leader there. 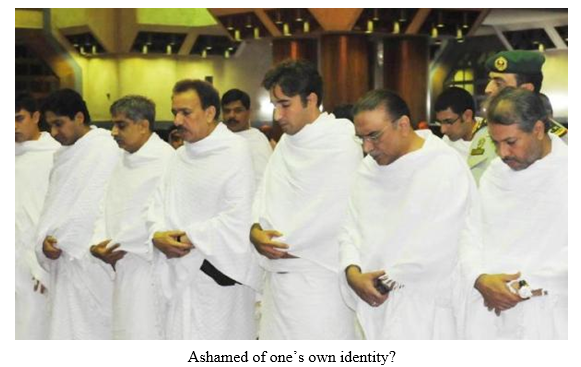