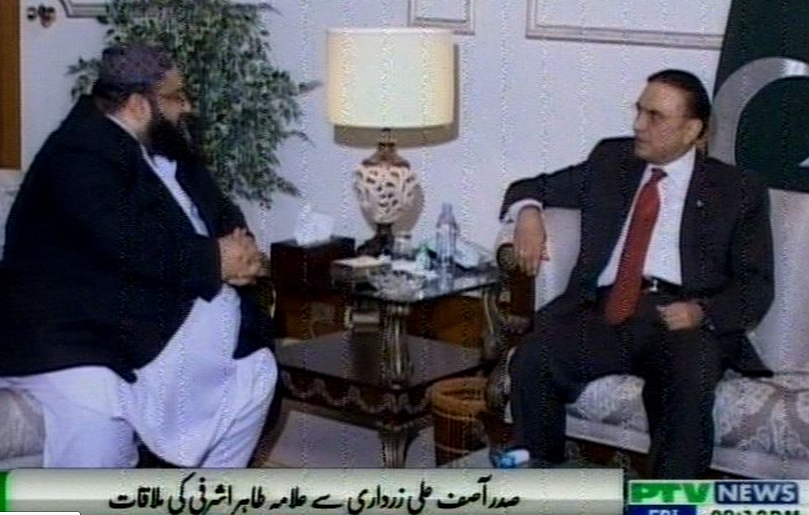 Once again ‘People’s government’ (Awami hakumat) has sent shivers down the spines of the Shias of Pakistan. Who is Tahir Ashrafi? You need not know who is. No one in the world needs to know who is. If a picture can pain a thousand words, then here is just one picture which will tell you who he is; Look at this photo: 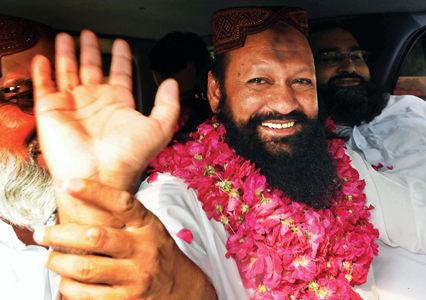 Sitting in the middle, wreathed and smiling, is the man whose name every Shia (the victim community) and every ISI-PML-N (his promoters and protectors) affiliate knows. This man is Malik Ishaq who has proudly said that he has killed 70 innocent Shias for the simple reason that they were Shias. Malik Ishaq is the founder of Lashkar-e-Jhangvi (LeJ) whose sole aim is to kill the Shias. All Shia killings, thousands of them, have been the work of LeJ.

On Malik Ishaq’s right side is Ahmed Ludhianvi who is the head of the banned Sipa-e-Sihaba and the parent organization of LeJ. You-Tube is full of his hate speech against the Shias. He also believes that the Shias have no right to exist in the world.

Now, one can imagine what type of company these two gentlemen must be.

If you guessed the identity of the third person in the photo, you were right. Yes, he is Tahir Ashrafi.

But what is the occasion of this photo. Well, it is the release from jail of Malik Ishaq. It was sitting in this Land Cruiser, seconds after the photo was taken,  that he replied to a journalist’s :”Now that you are out of jail, what will you do?”

“I,” declared Mali Ishaq, “will continue to do what I had been doing before being jailed!”

Which means he will continue to kill the Shias. True to his word, he has been doing his job perfectly.

If you thought the photo was vague, here is another one: 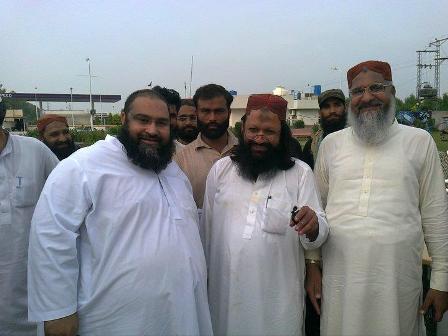 Yes, Malik Ishaq Deobandi is still in the middle. But Tahir Ashrafi Deobandi is one his right and Ahmed Ludhianvi Deobandi on his left.

The PPP government, led by President Asif Zardari, has appointed this man (Tahir Ashrafi Deobandi) as a member of the Islamic Ideological Council for a period of three years. The appointment was confirmed by President Zardari who is allegedly a Shia, but is too embarrassed to admit it (on him soon).

Now for three years this man will ensure what is kosher in Islam. This man will now tell who a Muslim is and what it means for something to be Islamic. Certainly the list of his guests will include his friends photographed above.

Recently, Tahir Ashrafi has threatened legal action against LUBP. He is welcome to do so based upon this article. If there is one word of libel, he can go to the court.

As a member of the Islamic Ideological Council, will Tahir Ashrafi say that the Shias are Muslims just like his own Deobandis? Will he agree with Allah (SWT) who in the Quran says that the murder of ONE human being (regardless or being a Shia or else) is equivalent to the murder of the entire humanity. Will Tahir Ashrafi show some character by accepting what Allah (SWT) has said?