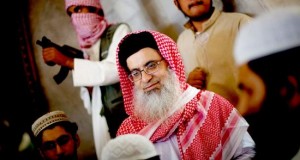 The term “billi kee dumm pay pair rakh dena” is most appropriate for Jang Group which in under attack from almost all quarters these days. While we have written a lot about the programs Mubasher Lucman has done on ARY in the last one week, and the outpouring of disgust for Jang Group in general, gives us hope and confidence that this group must have learnt some lessons. They came up with a flimsy response to the allegations after two delays. The response was nothing but 10 pages of trying to look innocent and presenting counter allegations against those who have come up with solid allegations and proofs.

One of the allegations made by  Mubasher Lucman  on 30 October 2013 was that Pervez Musharraf was not in favor of an operation on Lal Masjid because of presence of innocent girls but because of a Geo News anchor’s insistence the operation took place. Geo’s Anchor assured Pervez Musharraf that he will do programs to counter potential public backlash. Mubasher Lucman off course didn’t name him but it was obvious reference to Hamid Mir.

As it’s an allegation on Hamid Mir, he has done a program on Capital Talk on 31 October, 2013 which was to give a point of view of what happened to basically absolve himself. But to utter shock and horror, one of the guests was Abdul Aziz, the Khatib of the notorious Lal Masjid along with Fazl ur Rehman Khalil and Ahmed Raza Kasuri. How this program can be considered a planned one was just evident from one line that Ahmed Raza Kasuri said “Hamid Mir Sahab aap nay hee Defence University mayn ussay (Musharraf) ko kaha tha …”. Just as he said it, Hamid Mir went on the attack and showed various clips from 2007 and 2013 related to the operation to show that he didn’t have any role in it.

But coming to the shock of  the program, seeing Abdul Aziz sitting on Live TV was way to much. Isnt this the same Abdul Aziz who never would show his face on TV and give interviews with his back towards the camera? How come he was facing the camera today? Isnt this the same Abdul Aziz who according to a Jang Group newspaper, The News on 31 May 2007 had quoted Abdul Aziz as saying that “Lal Masjid administration has more than 10,000 suicide bombers on the mosque premises and more than one lakh across Pakistan”. He had even said “Our students enjoy the moments when a police or Rangers operation looms, and they get bored when the situation normalizes.”

However crack he may be, should Abdul Aziz be allowed to come on live TV and that too on a channel of the group which itself had published his crazy claims? 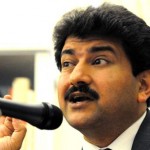 One should after this program further boycott Jang Group and Geo for their ways of glorifying known terrorists and crackpots. The crackpots being both Abdul Aziz and Ahmed Raza Kasuri!

Is this the open minded, liberal and moderate media group that we can trust on? No way sirs!

our correspondent
Thursday, May 31, 2007
From Print Edition

ISLAMABAD: The Lal Masjid administration has more than 10,000 suicide bombers on the mosque premises and more than one lakh across Pakistan, claimed Khateeb of Lal Masjid, Maulana Abdul Aziz.

“The suicide attackers are ready to operate anywhere/anytime in Pakistan,” he said at a press briefing at the Lal Masjid on Wednesday evening. “We consider suicide attacks are right in Pakistan in few circumstances, while we consider them as absolutely justified in the context of Afghanistan and Iraq,” he said. “Our students enjoy the moments when a police or Rangers operation looms, and they get bored when the situation normalises,” he said of the situation inside Lal Masjid. He said, “We favoured the Taliban not only in the past, we favour them even today.”

Responding to a question that the strategy adopted by the Lal Masjid administration to solve different problems was helping Musharraf’s agenda to bring liberalism in the country and that analysts think that the clerics were operating on the direction of agencies and basically helping the regime to achieve its agenda, he said it was totally wrong.

“We are not operating under the command of some agency, and I am ready for ‘Mubahela’ in this regard,” he added. He said the Musharraf government was not taking any advantage to fulfil its agendas from the actions of the Lal Masjid.

However, at this moment Aziz’s younger brother Maulana Abdul Rasheed Ghazi took the mike from him and further elaborated the answer saying, “Sometimes it happens. Someone takes advantage from some action, which is actually not aimed to support him.”

He said: “When we were fighting against the USSR, the US had taken advantage of the situation. Our struggle against the USSR was not aimed to benefit the US, but they took an indirect advantage of our struggle.” He also cited the example of the war of Muslims against Persia which indirectly benefited the Romans.

Aziz also disclosed that Gen (retd) Hamid Gul had told him during a conversation that according to the Constitution, any citizen of Pakistan can play the role of a ‘law officer’ if he observes some illegal activity somewhere and not find law-enforcement authorities there.

The Lal Masjid cleric said that not a single finger was cut during their peaceful movement. Asked why the administration did not do something for the poor and depressed class of society and confined its version of Islam to CD shops and brothels, the cleric said they could not do anything for improving the condition of the poor with their resources. However, they could stop people from doing wrong. “We are doing what we can do,” he added.