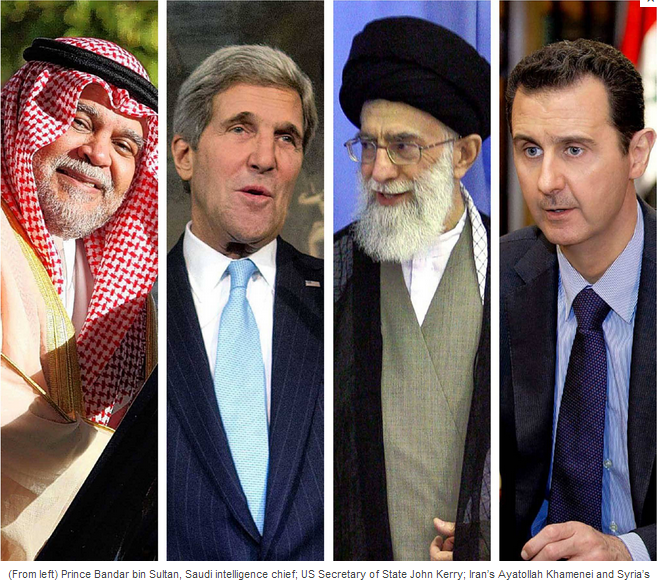 LUBP Editor’s note: We are cross-posting a valuable analysis of the current geopolitical situation in the Middle East by veteran journalist Robert Fisk. We have made some minor changes in the cross-posted article to reflect the fact that Saudi Arabia, UAE and other pro-Saudi regimes in the Middle East represent Salafi-Wahhabi, not Sunni, Muslims. It is a fact that Hambali-Salafi regime in Saudi Arabia does not represent the majority of Sunni Muslims in the Middle East and the entire world who generally belong to Hanafi, Maliki, Shafei sub-sects of Sunni Islam and are sympathetic to Sufi Islam instead of violent Salafi-Wahhabi-Hambali Saudi version of Islam.

On the surface it would appear that the Muslim world’s historic – and deeply tragic – chasm between Sunni and Shia Islam is having worldwide repercussions. Syria’s civil war, America’s craven alliance with the Salafi-Wahhabi Gulf autocracies, and Salafi-Wahhabi (as well as Israeli) suspicions of Shia Iran are affecting even the work of the United Nations. However, a deeper understanding would reveal that Saudi Arabia, UAE and other pro-Saudi regimes represent a tiny sub-sect of Sunni Islam, i.e., Salafi-Wahhabi and Hambali sub-sect which is less than 2% of worldwide Muslim population.

Saudi Arabia’s petulant refusal last week to take its place among non-voting members of the Security Council, an unprecedented step by any UN member, was intended to express the dictatorial monarchy’s displeasure with Washington’s refusal to bomb Syria after the use of chemical weapons in Damascus – but it also represented Saudi fears that Barack Obama might respond to Iranian overtures for better relations with the West.

The Saudi head of intelligence, Prince Bandar bin Sultan – a true buddy of President George W Bush during his 22 years as ambassador in Washington – has now rattled his tin drum to warn the Americans that Saudi Arabia will make a “major shift” in its relations with the US, not just because of its failure to attack Syria but for its inability to produce a fair Israeli-Palestinian peace settlement.

What this “major shift” might be – save for the usual Saudi hot air about its independence from US foreign policy – was a secret that the prince kept to himself.

Israel, of course, never loses an opportunity to publicise – quite accurately – how closely many of its Middle East policies now coincide with those of the wealthy potentates of the Arab Gulf.

Hatred of the Shia/Alawite Syrian regime, an unquenchable suspicion of Shia Iran’s nuclear plans and a general fear of Shia expansion is turning the unelected Salafi-Wahhabi Arab monarchies into proxy allies of the Israeli state they have often sworn to destroy. Hardly, one imagines, the kind of notion that Prince Bandar wishes to publicise.

Furthermore, America’s latest contribution to Middle East “peace” could be the sale of $10.8bn worth of missiles and arms to Salafi-Wahhabi Saudi Arabia and the equally Salafi-Wahhabi United Arab Emirates, including GBU-39 bombs – the weapons cutely called “bunker-busters” – which they could use against Shia Iran. Israel, of course, possesses the very same armaments.

Whether the hapless Mr Kerry – whose risible promise of an “unbelievably small” attack on Syria made him the laughing stock of the Middle East – understands the degree to which he is committing his country to the Salafi-Wahhabi side in Islam’s oldest conflict is the subject of much debate in the Arab world. His response to the Saudi refusal to take its place in the UN Security Council has been almost as weird.

After lunch on Monday at the Paris home of the Saudi Foreign Minister, Saud al-Faisal, Kerry – via his usual anonymous officials – said that he valued the autocracy’s leadership in the region, shared Riyadh’s desire to de-nuclearise Iran and to bring an end to the Syrian war. But Kerry’s insistence that Syrian President Bashar al-Assad and his regime must abandon power means that a Salafi-Wahhabi government would take over Syria; and his wish to disarm Shia Iran – however notional its nuclear threat may be – would ensure that Sunni military power would dominate the Middle East from the Afghan border to the Mediterranean.

Few realise that Yemen constitutes another of the Saudi-Iranian battlegrounds in the region.

Saudi enthusiasm for Salafist groups in Yemen – including the Islah party, which is allegedly funded by Qatar, though it denies receiving any external support – is one reason why the post-Saleh regime in Sanaa has been supporting the Zaidi Shia Houthi “rebels” whose home provinces of Sa’adah, al Jawf and Hajja border Saudi Arabia. The Houthis are – according to Saudis – supported by Iran.

The minority Sunni Salafi monarchy in Bahrain – supported by the Saudis and of course by the compliant governments of the US, Britain, et al – is likewise accusing Shia Iran of colluding with the island’s majority Shias. Oddly, Prince Bandar, in his comments, claimed that Barack Obama had failed to support Saudi policy in Bahrain – which involved sending its own troops into the island to help repress Shia demonstrators in 2011 – when in fact America’s silence over the regime’s paramilitary violence was the nearest Washington could go in offering its backing to the Sunni minority and his Royal Highness the King of Bahrain.

All in all, then, a mighty Western love affair with Salafi-Wahhabi Islam – a love that very definitely cannot speak its name in an Arab Gulf world in which “democracy”, “moderation”, “partnership” and outright dictatorship are interchangeable – which neither Washington nor London nor Paris (nor indeed Moscow or Beijing) will acknowledge. But, needless to say, there are a few irritating – and incongruous – ripples in this mutual passion.

The Saudis, for example, blame Obama for allowing Egypt’s decadent Hosni Mubarak to be overthrown. They blame the Americans for supporting the elected Muslim Brother Mohamed Morsi as president – elections not being terribly popular in the Gulf – and the Saudis are now throwing cash at Egypt’s new military regime. Assad in Damascus also offered his congratulations to the Egyptian military. Was the Egyptian army not, after all – like Assad himself – trying to prevent religious extremists from taking power?

Fair enough – providing we remember that the Saudis are really supporting the Egyptian Salafists who cynically gave their loyalty to the Egyptian military, and that Saudi-financed Salafists are among the fiercest opponents of Assad.

Thankfully for Kerry and his European mates, the absence of any institutional memory in the State Department, Foreign Office or Quai d’Orsay means that no one need remember that 15 of the 19 mass-killers of 9/11 were also Salafists and – let us above all, please God, forget this – were all Salafi-Wahhabi citizens of Saudi Arabia.