Home  »  Featured • Original Articles   »   The Drones, the Media and Pakistan – by Arshad Haroon 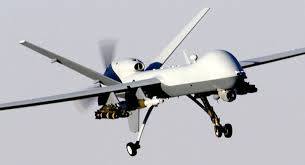 I was flabbergasted to watch that every Tom and Dick in the Pakistani media was discussing the amnesty international report on the use of drones in Pakistan. The report claims that American drones have killed between 400 and 900 presumed civilians (non combatants) over a period of 9/10 years. The Pakistani media in the quest for sensationalizing the issue forgot to mention the 45000 civilians killed in terror attacks over the same period of time and the Pakistani media again conveniently choose to ignore the following key recommendations of the reports for Pakistan government:

• Provide adequate access to justice and reparations for victims of US drone strikes and seek reparations and other remedies from the US authorities.

• Provide adequate access to justice and reparations for victims of attacks by Pakistan armed forces and ensure independent and impartial investigations into attacks that violate human rights. Where there is sufficient admissible evidence, bring to justice in public and fair trials without recourse to the death penalty the persons responsible for unlawful killings resulting from those attacks.

• Provide victims of US drone strikes and attacks by the Pakistan armed forces or armed groups with prompt medical treatment and other remedial assistance.

• Ensure independent and impartial investigations into US drone strikes that violate human rights, including whether Pakistani officials were involved. Where there is sufficient admissible evidence, bring to justice in public and fair trials without recourse to the death penalty the persons responsible for unlawful killings resulting from those strikes. Ensure that effective redress is provided for the harm caused by these strikes.

• Publicly disclose information on all US drone strikes that the Pakistani authorities are aware of, including casualties and all assistance provided to victims.

• Facilitate access for independent human rights investigators to North Waziristan and the rest of the Tribal Areas to document cases of killings by US drone strikes and other possible human rights violations by Pakistani forces and armed groups.

Should we praise or mourn the Al-Bakistni Media for using it to create hate in the hearts of those who don’t know the international power dynamics!