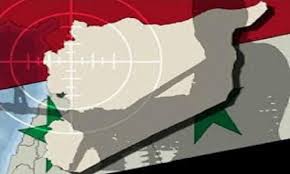 Obama’s red line amounted to a “green light.” It was AFTER Obama drew a red line that Syria used chemical weapons, (or, al Qaeda used chems). Subsequently, Obama lied about his clear statement, and smoothly reframed it as a global red line! However slick his articulation might be, the public does often get amnesia.  We remember his warning. Then, he claimed authority in the “War Powers Act;” Then, just as suddenly, when he became fearful of his own presidential authority, and the risks involved if it fails, he passed it to the congressional vote in order to be insulated so as not to take the blame when things escalate. The recent ploy of Syria giving all its chemical weapons to Russia (its ally), allows Kerry and Obama to stall another week or so. How would this be monitored? Couldn’t this also buy time for Assad to marshal forces without fear of the promised “limited attack” on Syrian targets? Since when does the United States of America believe anything that Putin says, who openly ridicules Obama?

This video illustrates a great overview of the questions America has and this video corroborates my last article:

Where are they all! No one wants Chemical or Biological weapons released, but there is no international standard outining invasion of countries that go against the consensus (Syria never signed the Anti-chemical warfare resolution; neither did Russia, who have a stockpile of Chemical and Biological weapons). Where is global support, if this is the worlds’ red line? Where is the global outrage? What do the polls say? The worst one I saw was on conservative TV Fox News which was 95% against striking Syria. This has had the affect of joining Democrats with Republicans; and the oddest partners of all- Kerry becomes a war monger? And Obama and McCain side by side.

Warnings you hear from Americans against this proposed attack on Syria:

1. Don’t involve the U.S. in Syria. Obama/Kerry/McCain justification is based on: we will look weak if no action; but, it won’t change the perception that the U.S. won’t act in a crisis (We didn’t do anything when Saddam released Chemical gas on the Kurds). And, an Kerry’s remark: “It will be an unimaginably small strike,” sounds almost apologetic to the American people, and certainly not convincing that anything will change.

2. the US cannot hit Chemical stockpiles anyway, they move them, and they are in Syrian neighborhoods

3. The U.S opinion polls over 50% disagree with strikes on Syria.

4. In a real crisis: the U.S. WILL act decisively- example: Iran will have nuclear capacity in 2 years- we will take away that capacity because THAT IS a homeland threat (not Syria).

5. The “red line” statement has put Obama in a “save face” position

6. A planned “limited strike” will allow nothing to really change in Syria, thus Assad comes out looking as if he won the war of words.  That will embolden Jihadists.

A weakened Syria could undermine Iran’s regional influence, but a U.S. strike could actually benefit Iran. The government there has established a strategy for responding to a U.S. attack. The Ayatollah would activate his militant proxies in the region, which includes Hezbollah.

While Iran cannot afford to retaliate directly against the United States, it may very well retaliate indirectly through militant proxies. Iran’s strategy involves more than just activating these proxy groups.

The only real reason the United States would want a regime change is to diminish Iran’s regional influence. But the U.S. public and press push-back because they do not want to supplant al Assad only to see Damascus come under al Qaeda’s control.

Obama’s address to the nation on September 11, 2013 changed nothing, except extending more time to talk to Kerry’s counterpart from Russia concerning Syria turning Chemical Weapons over to Russia, which will add to Russia’s stockpile, and benefits us how?

I fear this is Obama’s Watergate, his Waterloo.