Home  »  Original Articles   »   In a U.S. strike on Syria where a significant number of rebels are Salafists, critics mock Obama: “U.S. is al Qaeda’s Air Force” – by Rusty Walker 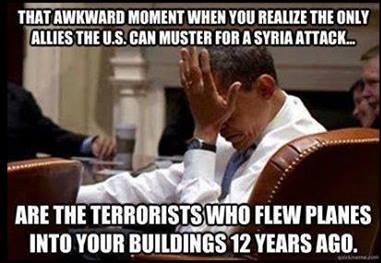 Let us learn our lessons. … Never believe any war will be smooth and easy or that anyone who embarks on that strange voyage can measure the tides and hurricanes he will encounter. The statesman who yields to war fever must realize that once the signal is given, he is no longer the master of policy but the slave of unforeseeable and uncontrollable events… incompetent or arrogant commanders, untrustworthy allies, hostile neutrals, malignant fortune, ugly surprise, awful miscalculations. … Always remember, however sure you are that you could easily win, that there would not be a war if the other man did not think he also had a chance.

The photo above depicts a U.S. president in a posture that reflects someone who has found he has drawn himself into a corner with his own “red line” statement. The text is compelling as it is a paradox. However, it is difficult to reconcile how someone at the top of Intelligence Reports has been unaware that his “Freedom Fighters” include significant numbers of Salafists. General Martin Dempsey, Chairman of the Joint Chiefs of Staff, stated  a week before the Senate Committee Hearings of the rebels composition, that, “we just don’t know.” General Dempsey continued, “Numbers don’t tell the whole story…The Jihadists are ruthless and more likely to die for their cause…This is like gangland! They don’t coordinate; they don’t have some central office.” Fareed Zarkaria, Editor at Large for Time magazine, said of the rebels, on CNN yesterday, that “the honest truth is, we don’t know much about the composure of the rebels.” Senator Diane Feinstein, who supports the strike on Syria, but whose California constituency does not support the strike, boasts that she has been to the Intel Meetings and “they [the public] don’t know what I know.” This begs the question: why don’t we know? Why haven’t the numbers and the dynamics of the rebels been shared with her constituency, indeed, the American public and the world, so that we can all make an educated decision?

Several major polls confirms that the the majority of the U.S. population do not support U.S. Syrian involvement.
http://www.huffingtonpost.com/2013/09/06/syria-military-action-poll_n_3881084.html

General Dempsey further claimed as he sat next to Secretary of State John Kerry in the recent Senate Committee, “At the beginning of the year there was a period of time evident that the extremists groups were prevailing inside the opposition.” This has been explained away by Elizabeth O’Bagy, Political Director, Syrian Emergency Task Force, and senior research analyst for the Institute for the Study of War, by claiming that the numbers of Jihadists versus Free Syrian Army, “depends on when you are making the estimate, as the situation is so fluid.” One wonders given this assumption, how does Kerry come up with 80 % are “Good Guys” as his unwavering assessment. O’Bagy‘s “fluid” comment, casts doubt on any speculation regarding Salafist/secular rebel ratios, and squares with the information available that has most of the opposition forces scattered all over Syria. Faheed Zarkaria, who just returned from Turkey, indicated that there are “100s of small insurgency groups in various cities around Syria; they are independent without communications with each other; no unified political command. So how people can determine what percentages are, mystifies me.”

That said, the rebels “Victory Front” aka Jab hat Nusra claimed responsibility for some 600 attacks in Syria; Islam Brigade aka Liwa Al-Islam is active in Damascus; two main Liberal Alliances are a serious presence in Syria, the Syrian Liberation Front (SLF) and the Syrian Islamic Front. I ask the reader, considering the initial freedom fighters were secular, do these rebels sound secular, or more Syrian Islamist fighters?

A typical report came from the New Yorker magazine yesterday, from a journalist on the Syrian battlefield, allowed access to the rebel Jihadists, claiming the fight in mountains of Jabal al-Akrad, in Syria’s northwestern Latakia province, for example, is critical. This region is Assad’s heartland and the base of his support. The battles there are led by an Islamist coalition, controlled by Al Qaeda’s Islamic State of Iraq and al-Sham (ISIS) and Suqoor el Ezz, headed by a Saudi called Sheikh Sakr. The coalition includes Jabhat al-Nusra, which is also tied to Al Qaeda; the Salafi Ahrar al-Sham brigades; and groups solely made up of foreign jihadists, who are there in great numbers. The rebel Free Syrian Army is also fighting here, but not in the lead, according to yesterday’s New Yorker magazine report on Islamist Fighters.

One of the most self-serving of  wordsmithing came from former President Bush’s Secretary of Defense, Donald Rumsfeld, when he stated of the unknown factors regarding the make-up of Salafists versus Secular fighters, “Well, we are learning the difference between intelligence and fact. Intelligence is not the same as fact.” In so blatant a spin on intelligence regarding Syria, he at once absolved himself and Colin Powell’s UN declaration of “intelligence confirms Iraq has WMD,” How? Intelligence is apparently not facts.

Reports by top U.S. general staff, and Syrian rebels on the ground, confirm that throughout the rebellion and up to the moment, Jihadist terrorists were and are the ones receiving weapons through Turkey from the CIA, Saudi Arabia and Qatar. This has been corroborated in a more recent report by Major General (ret) Paul E. Vallely, after his trip to the Syrian war zone and meeting with the Commander in Chief of the Free Syrian Army, Colonel Riad El Asaad. General Vallely was informed that it is clearly evident that “the United States again are backing the wrong elements in the Syrian rebellion- sending all of the support and logistics to the Muslim Brotherhood/Salafists Syrian Military Council backed by Qatar and Saudi Arabia.” The FSA nationalistic command under Colonel Riad, which includes the majority of the opposition forces, claims they “did not receive any support- either military or logistical.” These are the same rebel force, Secretary of State Kerry claims are the “good guys,” are secular, and the majority- and yet, no promised arms have been forthcoming. Major General Vallely’s website contends that the “Financial support

and arms flowing through the Supreme Military Council and the Syrian National Council (SNC) have been given to radical Islamic elements that have inserted themselves into the battlefield.” The true Free Syrian Army (FSA) “has not received any of the support from the international community.” Instead they have been marginalized, even though they claim to be the majority of the support on the ground.

The commander of the FSA stated that they are “not being represented or supported in Washington D.C. This must change, The U.S. must stop supporting the Muslim Brotherhood and Salafist elements and start supporting the FSA.” The FSA further claims that were they given arms support by the U.S. they believe they could make significant gains on the battlefield.

Representative Peter King, (Republican) NY, on the Intelligence Committee said that CIA Director John Brennen, stated “we do not know exactly who makes up the rebels.” Nevertheless, Secretary of State John Kerry states unequivocably of the rebels, “They are 80% “Good Guys,” the opposition 20% are “Bad Guys.”  Although I hardly trust Putin, the Russian Prime Minister’s response to that was, “He’s lying.” View shared post

The New York Times posted a video of the Syrian Rebel brutality that further poses a dilemma for U.S. citizens that are being asked to back the strike. These are the rebels’ summary execution of seven captured soldiers reveal a cruel and bloody mentality war criminal mindset.

The United States of America’s Cold War nemesis, Russia, has a stake which is larger than portrayed. The Russian’s believe that the Syrian regime needs to remain intact, or it threatens Russia’s global position, and its strategic interests which go deeper than humanitarian use of chemical weapons. Syria is a client-state of Russia, and key to the largest part of Russia’s power-base: its energy, not merely Syrian oil. Russia’s power-base in the world today is its energy sector. The U.S. has begun to advance in gas exports, which is in direct conflict with Russia’s fiscal security, and prestige in the region. This is a factor that is not publicized, as it is not a crisis warranting Stealth Bombers and precision warfare. Chemical weapon use, can serve both U.S. strategic needs: the fight for energy rights and prohibitions on chemical and biological weapons use.
But, this is out of the scope of this essay, and so should be taken up in a different article.