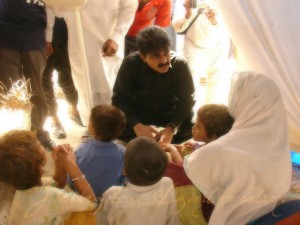 Shahbaz meeting with kids in Balakot after the earthquake in 2005

As soon as the calenders were flipped to September an excitement would begin to build in two specific houses in Islamabad. One my nano’s and the second mine. Shahbaz’s birthday would be coming up soon. We would begin planning different ways to surprise him and choose between different options for gifts. But September 9 would begin with a never ending series of calls, bouquets, and cards pouring in from diplomats, leaders, admirers and friends. We would spend the whole day decorating the house, preparing food and setting up a surprise waiting for Shahbaz to come home.

Yet his birthday never excited him. It was like a duty he was fulfilling to make us all happy. His mind and thoughts were somewhere else and we knew what he is thinking about. The persecution, the injustices we minorities faced. He was a man who slept four hours every day and worked for the rest twenty hours. And that is the routine he followed ever since I was a child. All he struggled for, all he talked about, all he dreamed about was freedom, justice and equality.

Whenever we would sit together he would share things he had seen, people he had met. The pain and suffering people go through every day. He would talk about the plans he had in mind. He would connect with people as if they were his own flesh and blood and everyone would feel like they were the most special people in his life. He loved people, he loved life, he loved Pakistan.

Besides championing equal rights for the persecuted and voiceless, he loved being around the poor and having the means to help them. Every time he would go to his home village he would be dropping hidden “notes” to people around him. He would find excuses to get ten or fifteen “daighs” prepared and feed the whole village. Our house would be filled with kids, women and men from the village coming to partake in the “party”. That was a sight to see: Shahbaz smiling, laughing and carefree which was seldom. I remember mum tell me that when Shahbaz was a kid he would return from school and tell nano that he is “very very hungry” and to cook up a feast for him. Once the food was prepared he would ask my nano to pack it all as he wanted to go in the fields and eat. Later on my nano found out that he was feeding the poor kids in the village.

There is so much I can write about Shahbaz. He was my friend, my brother and my mamu. But he was also a man who loved his people and country so much that he was ready to give up his life for them. He believed in his people. He believed his death would give us the courage to speak up for what was true and just. His loss cannot be replaced. But his life can be celebrated. Let us not fail people like Shahbaz and many before him. During one of his interviews he said “Pray for me, I am a man who has burned his ships behind him. I cannot and do not want to turn back. I will combat extremism and I will fight in defense of the minorities to death”

All men have fears, but the brave put down their fears and go forward. Sometimes to Death, but always to Victory. Even in his death Shahbaz is victorious because he has lighted the path for us. May the Pakistan he envisioned soon come to reality. The Pakistan in which every Pakistani irrespective of their faith lives with peace, respect, satisfaction, hope and justice. Happy Birthday Shahbaz!