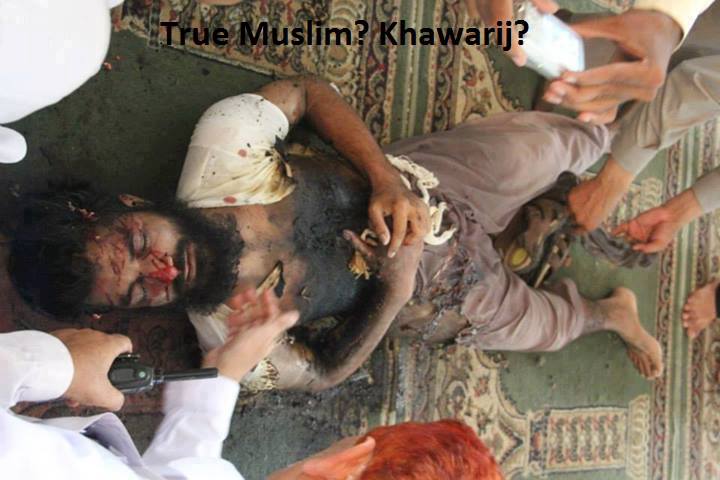 Here is the Video footage of a failed attempt of suicide bombing at Jamia Mosque Ali Ibn-e-Abi Talib , in Barakahu, Islamabad, while prayers were in progress. CCTV footage shows that the assailant was walking on a path that leads to the mosque from Attal Chowk. As he neared the mosque, he took out a pistol and started firing, forcing people to flee the area. The bomber then ran through the narrow streets leading up to the mosque while brandishing the weapon. There are two guards following him. One of them sneaks into a house, probably to take refuge, but the other one responds to the call of his duty and continues to follow the terrorist. The guard is finally able to reach the terrorist soon after the terrorist enters the mosque and is able to gun him down before the terrorist can explode his jacket. Hence, a major terrorism attempt was foiled by a conscientious and brave private security guard. The pictures here show the terrorist’s body lying in the main hall of the mosque.

It is interesting to note that the government’s much touted ‘heavy deployment’ of security agencies is nowhere to be seen in the video. In fact there is no policeman in sight. Subsequent to the incident SSP Islamabad Dr Rizwan has suspended six officials including the SHO of Barakahu Abid Hussain and a probe has been launched into the matter. Luckily these suspensions don’t come after a heavy loss of life, as they usually do in the Islamic Republic. However, what more can we expect from a Police force which is not even able to save its own personnel as evinced by the attack in Quetta just a couple of days of earlier. In fact the spate of attacks across the country in the past few days and the conquest of DI Khan jail by the terrorists reek of a complete security breakdown in the country. 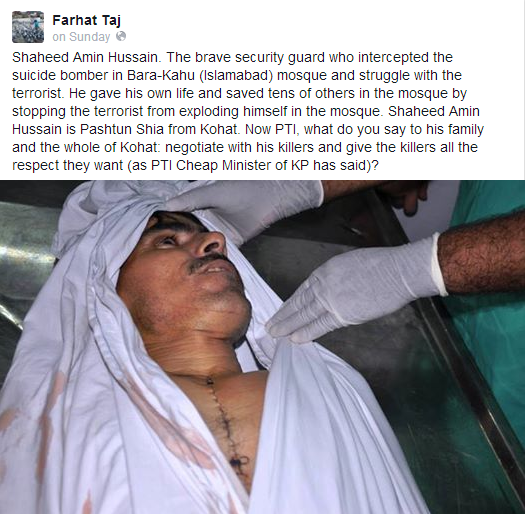 Perhaps the brave guard, Shaheed Amin Hussain, in this instance may have dismayed our great leaders like Sharif brothers and Imran Khan who want to negotiate with these very terrorists. They may point out that the guard should have tried to negotiate with the terrorist and convince him to abandon his holy plan for the sake of the greater national interest of Pakistan. Who knows the guard may have even tried but the terrorist, quite visibly, doesn’t seem interested in any sort of negotiations as he runs and fires in a bid to enter the mosque. I find it extremely worrisome for if the terrorists remain intent on blowing themselves up without giving negotiations a chance then it may become very difficult to ensure peace in a state whose government thinks that the best bet for peace is to negotiate with the terrorists.

Sarcasm apart, little does our government realize that the terrorists must never be rewarded for using violence and inflicting terror. Negotiations give legitimacy to terrorists and their methods and undermine actors who have pursued political change through peaceful means. Talks can destabilize the country’s political systems, undercut sovereign legitimacy, and set a dangerous precedent in a country where there are countless armed groups. While watching a video like this one, the idea of negotiations with these terrorists should make us collectively sick to our stomachs. It is a slap in the face to every single man and woman who has fought and died or has been killed in Pakistan’s longest war. It is hard to see why our leaders are too afraid to do what is necessary to eliminate these terrorists? What value negotiations with these brutal radicals? They will tell us whatever they need to in order to survive, regroup, and launch a counter-attack. Our government and military leadership have to look at this differently. This is not conventional warfare. The whole nation has to fight it together to give this country a chance.