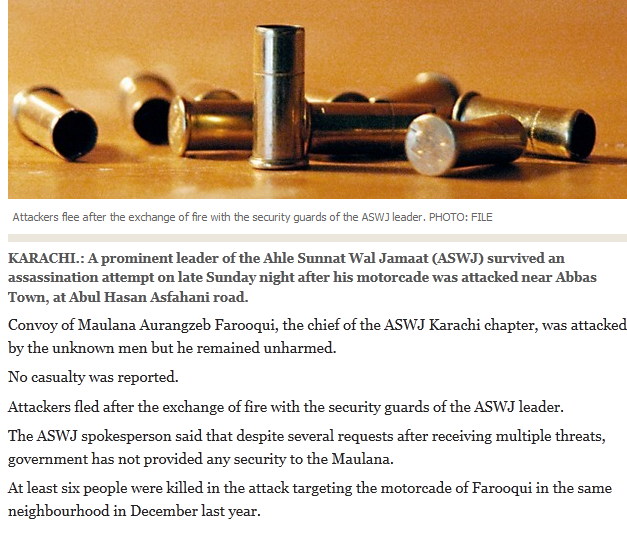 If one reads above piece of news, it would seem that Karachi chief of banned Anjuman Sipah e Sahaba (ASS, currently operating as Ahel Sunnat Wal Jamaat Deobandi ASWJ-D), Aurangzeb Farooqi Deobandi, was attacked by a rival sectarian group in a supposed sectarian warfare of Karachi, a false binary being propagated often by so called ‘liberal’ English newspapers like The Friday Times (TFT) blog. However, chief ASS of Karachi survived the attack. There are no details mentioned. Only the following line: “No casualty was reported.”

It seems like this time our ‘liberal’ media has crossed all boundaries to cover up crimes of these terrorists. The real detail of the incident surprisingly comes under the Jamaati “Ummat” publication which also sometimes publish Farooqi’s columns as well:

If we read only the headline we find out that yes there at least was a casualty. Ummat in its heading declares the person as ‘mubayyana hamlawar‘ (alleged attacker).

Use of ‘alleged’ here is interesting because if one reads the details of the news, one finds out the real story which Ummat shamelessly did not show in their headline. The poor guy was among one of the protesters against the unannounced load shedding doing aerial firing. When the chief ASS convoy came through, these fearless mujahids thought they were being attacked and opened dire resulting in death of one of the protesters and fled the scene.

Only later was it found out that the person belonged to Sunni Tehreek, a Sunni Sufi/Barlvi religious group.

While the pro-rightwing daily Ummat did it best to make a cover up for the murder, it did reveal at least some details of the incident. While ET report seems to be written by Farooqi’s PR. Not only does it skips the fact that Farooqi guards were in fact involved in a murder, but it attempts to portray him as a victim in the incident which is highly shameful.

ET should remove the story from its page and publish a clarification as well for providing wrong information.

Furthermore, can our media ask the authorities that why the FIR of the murder has not been logged yet against chief Karachi ASS terrorist? Will those “liberal” friends who readily wish to lodge FIR against LUBP bloggers for defamation also pursuit the FIR campaign against Farooqi which same zeal? Or at least support such demand?

Or perhaps it is too much to ask!