If there was ever a doubt in the approach and priorities of Jang Group about Pakistan and its security situation, it was evident from the way they headlined the drone attack which according to them killed four terrorists, glorified as “foreigners” in their headline on July 29, 2013 and then the next day that is July 30, 2013 gave a small insignificant news about DI Khan Jail attack in which 40 prisoners fled.

Please see snapshot of Jang’s front pages for both the days and think about their approach. 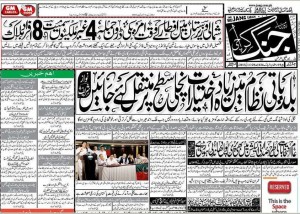 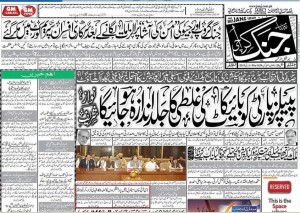 We have basic questions to ask Jang and its owner Mir Shakil ur Rehman:

“We have protested directly to reporters, editors, and the Group Chief Executive and Editor in Chief Mir Shakil ur Rehman over the consistent inaccuracy of “Jang Group” reporting, as well as their refusal to apply the most basic standards of journalistic ethics, stating that we expect to be called about and to respond to any story any entity of the group is carrying about the Embassy or its activities, and even provided them with direct telephone numbers for the IO, the PAO, and the Ambassador. Despite these efforts, the “Jang Group” has not changed its practices.”

The people of Pakistan should see through this yet another act of deliberately creating problems for the state of Pakistan through their irresponsible reporting.