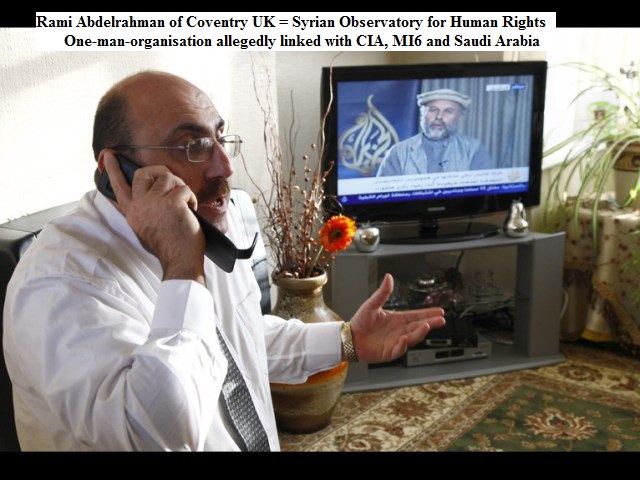 The following two articles published in the Guardian and LD tell us about Rami Abdelrahman and his UK-based propaganda organisation, a one man group known as ‘Syrian Observatory for Human Rights’ (SOHR). Rami Abdelrahman’s ‘Syrian Observatory for Human Rights’ has been used by the Western media and intelligence agencies for their reports on Syria.

The SOHR is a one-man operation based in the UK. Its founder and member Rami Abdulrahman is openly part of the Syrian opposition, run by the CIA and its allies in the UK, Saudi Arabia, Qatar etc.

Rami Abdulrahman left Syria over 10 years ago. He is “nearly 3,000 miles away from the alleged subject of his ‘observations'”. Most of his observations are clearly biased in favour of the Free Syrian Army and Al Nusra Front often rationalizing and justifying their acts of violence against innocent Sunni Sufis, Shias, Alawites and Christians, while providing exaggerated and unsubstantiated accounts of brutality by the Assad regime.

Recently it was revealed that human rights activists and reportes of SOHR in Syria are activ members of FSA and Al-Nusra terrorists. https://lubpak.com/archives/279619

The Syrian Observatory for Human Rights

The Syrian opposition: who’s doing the talking?
by Charlie Skelton

The justification for the “inevitable” military intervention is the savagery of President Assad’s regime: the atrocities, the shelling, the human rights abuses. Information is crucial here, and one source above all has been providing us with data about Syria. It is quoted at every turn: “The head of the Syrian Observatory for Human Rights told VOA [Voice of America]that fighting and shelling killed at least 12 people in Homs province.”

The Syrian Observatory for Human Rights is commonly used as a standalone source for news and statistics. Just this week, news agency AFP carried this story: “Syrian forces pounded Aleppo and Deir Ezzor provinces as at least 35 people were killed on Sunday across the country, among them 17 civilians, a watchdog reported.” Various atrocities and casualty numbers are listed, all from a single source: “Observatory director Rami Abdel Rahman told AFP by phone.”

Statistic after horrific statistic pours from “the Britain-based Syrian Observatory for Human Rights” (AP). It’s hard to find a news report about Syria that doesn’t cite them. But who are they? “They” are Rami Abdulrahman (or Rami Abdel Rahman), who lives in Coventry.

According to a Reuters report in December of last year: “When he isn’t fielding calls from international media, Abdulrahman is a few minutes down the road at his clothes shop, which he runs with his wife.”

When the Guardian’s Middle East live blog cited “Rami Abdul-Rahman of the Syrian Observatory for Human Rights” it also linked to a sceptical article in the Modern Tokyo Times – an article which suggested news outlets could be a bit “more objective about their sources” when quoting “this so-called entity”, the SOHR.

That name, the “Syrian Observatory of Human Rights”, sound so grand, so unimpeachable, so objective. And yet when Abdulrahman and his “Britain-based NGO” (AFP/NOW Lebanon) are the sole source for so many news stories about such an important subject, it would seem reasonable to submit this body to a little more scrutiny than it’s had to date.

West’s Syrian Narrative Based on “Guy in British Apartment”

Opposition propagandist in England apartment is, and has been, the sole source cited by the Western press.

The “Syrian Observatory for Human Rights” has been cited by the Western media for over a year in nearly every report, regardless of which news agency, be it AFP, AP, CNN, MSNBC, CBS, BBC, or any of the largest Western newspapers. One would believe this to be a giant sprawling organization with hundreds of members working hard on the ground, documenting evidence in Syria with photographs and video, while coordinating with foreign press to transparently and objectively “observe” the “human rights” conditions in Syria, as well as demonstrate their methodologies. Surely that is the impression the Western media attempts to relay to its readers.

However, astoundingly, the Syrian Observatory for Human Rights is none of these things. Instead, it is merely a single man, sitting behind a computer in a British apartment, who alleges he receives “phone calls” with information always incriminating the Syrian government, and ever glorifying the “Free Syrian Army.” In fact, Reuters even admitted this in their article, “Coventry – an unlikely home to prominent Syria activist,” and even concedes that this man, “Rami Abdulrahman,” is openly part of the Syrian opposition who seeks the end of the Syrian government. Abdulrahman admits that he had left Syria over 10 years ago, has lived in Britain ever since, and will not return until “al-Assad goes.”

Of course, beyond this single article, Reuters and its fellow news agencies are sure to never again remind readers of these facts.

The opportunity for impropriety seems almost inevitable for a man who openly reviles a government long targeted for “regime change” by the very country he currently resides in, and who’s method of reportage involves dubious phone-calls impossible for anyone to verify. When Abdulrahman isn’t receiving mystery phone calls from fellow opposition members in Syria (like “Syrian Danny“) or passing on his less-than-reputable information to the Western press, he is slinking in and out of the British Foreign Office to meet directly with Foreign Secretary William Hague – who also openly seeks the removal of Syrian President, Bashar al-Assad. 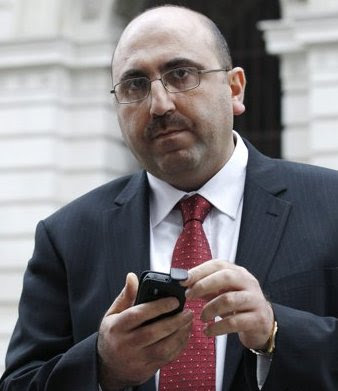 Clearly for real journalists, Abdulrahman is a useless, utterly compromised source of information who has every reason to twist reality to suit his admittedly politically-motivated agenda of overthrowing the Syrian government. However, for a propagandist, he is a goldmine. That is why despite the overt conflict of interests, the lack of credibility, the obvious disadvantage of being nearly 3,000 miles away from the alleged subject of his “observations,” or the fact that a single man is ludicrously calling himself a “Syrian Observatory for Human Rights” in the first place, the Western media still eagerly laps up his constant torrent of disinformation.

And when the Western press cites such a dubious, compromised character, it means that the actual evidence inevitably trickling out of Syria contradicts entirely the West’s desired narrative, so profoundly in fact, that they must contrive the summation of their “evidence” from whole cloth with “tailors” like Abdelrahman. And while the general public should indeed be angry over being deceived on such a vast scale, they should be utterly outraged that the establishment thinks they are so stupid – they’d believe any evidence coming from an opposition activist, disingenuously masquerading as a reputable organization, telling us all what is happening in Syria via “phone-calls” received in his plush apartment in England.