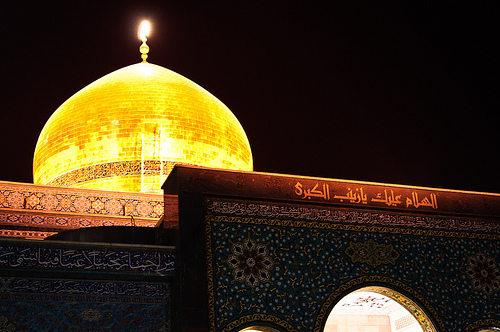 The attack on Sayyeda Zainab’s (A.S.) mausoleum, in the Syrian capital, Damascus, is an instance of the Takfiri Deobandis from Pakistan partnering with Wahhabis and Salafis to form the Global Al- Qaeda that is unwittingly backed by NATO and the Western alliance. Hopefully, this is an error based on misunderstanding by the Western Alliance of just who these animals are. There is no doubt, that the American people have not forgotten the terror committed by these same Al Qaeda on 9/11.

This  is a disaster for the global community!  The significance of Sayyeda Zainab (AS) cannot be overstated. She was the co-leader of Karbala with Imam Hussain against an unjust and oppressive Caliphate.

Taliban has now set up camp in Syria. It was Al Qaeda, who has paired with Pakistani Taliban, to perpetrate a religious profanity by attacking a Shrine so important to the Muslim community. This attack on the shrine of Sayyeda Zainab (AS) is a disaster not just for Muslims, but for religious communities everywhere. Those of us with a love of history understand that great religious events shape history, and recognize that the desecration of this kind should not be relegated to the back pages of press reports. Why are Pakistani Muslims and world leaders so silent?

Perhaps it should be explained, and understood, who Sayyeda Zainab (AS) is. It is well known that on the 5th day of the 5th month of the 5th Hijri, after the completion of the Panjatan, the daughter Seyyada Zainab (AS) was born to Ali (The rightly guided Caliph)  and Batool (the daughter of the founder of Islam).  Sayyeda is a revered personage for Muslims everywhere. Sayyeda Zainab (AS) had two great missions to reveal the truth.  One was to show the true face of Yazid and his followers, and the other was to uncover who the Ahlulbayt really were and what their importance was.  At every step of her long journey she fulfilled these two missions. The whole world is indebted to her sacrifices and her courage, as Sayyeda became a verification of the words of Allah; “Those who believed and migrated and strive hard in Allah’s way with their possessions and their lives are far higher in rank in Allah’s view. They are those who achieved salvation.” As you can see, Sayyeda Zainab (AS) can be seen as the Christian saint might be viewed, and of course, Sayyeda Zainab (AS) transcends political figures.

Universal belief that Assad is the villain is not proof of the validity of the rebels. The rebels are Islamist. Meanwhile the United States is forgetting lessons of 1980 Afghanistan, and that attempting to put out a fire by pouring oil on it. General Martin Dempsey, the U.S. chairman of the Joint Chiefs of Staff, incredibly has briefed President Obama on options for military intervention in Syria. The Rebel leader, Jarba is a veteran secular dissident and seen as close to Saudi Arabia which has repeatedly urged the European Union to arm Syrian rebels. This is in spite of some Western and South Asian skepticism of supplying arms to the opposition that could fall into the hands of Islamist radicals. It should not be forgotten that the rebels in Syria are Saudi-funded Wahhabi terrorists fighting against the Assad Government, and are as much our enemies as Assad.

The objective of these Salafists is the same as the past destruction of Sufi shrines in Mali, Libya and Syria by Al Qaeda/Taliban affiliated Takfiri Salafi/ Deobandi/ Wahabis. The Muslims leaders have said in their condemnation messages that it is Saudi Arabia that is attempting to attack the sacred places of Muslims, the Baitullah and the Holy Shrine of Our Last Holy Prophet Hazrat Muhammad PBUH, which is situated in the Masjid e Nabawi Premises. The first step of Al Saud have already demolished the Holy Shrines of all the Family Members of the Holy Prophet in the “Baqee Cemetery” commonly known as “ Janaat ul Baqee.”

These Salafists have proven only one thing:  In maligning Islam, by creating and sponsoring the Groups Like Taliban, al Qaeda , and allied groups they are simply the descendants of the Munafiqeen, that is, Munafiqeen e Dunya, i.e., hypocrites of the world, who consider themselves Muslims, but in fact, a disputable claim. Whether Jundullah, Boko Haram, Free Syrian Army, or any other group, operating in any part of the world under the banner of Al Saud, they are Takfiri Salafists that kill Muslims, and are nothing but political opportunists, bent on a Caliphate fantasy.

Sayyeda Zainab (AS) as the co-leader at Karbala with Imam Hussain (AS), renders the Sayyeda Zainab(AS)  Mauseleum as a symbol of courage to all humanity. Humanity needs to stand up for the reverence for historical monuments of humanitarian importance.