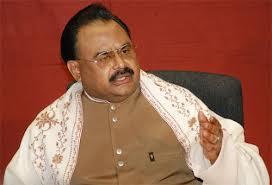 Altaf Hussain may have put MQM in a fight for its life and with it the Shia, Sunni Brelvi, Christian and minority population of Karachi. He can pay for his sins whatever they maybe. The important question is about MQM versus SSP and Takfiri Deobandis Taliban (Sipah e Sahaba ASWJ LEJ). 182 Sipah Sahaba workers were killed in Karachi in 2011-12. None, since is running for its life in the past two months.

If you don’t see this as Takfiri Deobandi Taliban (Sipah e Sahaba ASWJ LEJ) versus Shia, Sunni Brelvi and minorities problem then you are not alone. There are many in Pakistan whose ethnic affinities are stronger than their religious belonging (which would be a good thing if it were true for entire Pakistan but unfortunately it is not) and who would like to see MQM destroyed even if Karachi’s Shias, Sunni brelvi and minorities are killed like flies as a consequence.

On the other hand there are many non-mohajirs who understand the greater game and long-term stakes involved. They are keenly observing the global realignment.

Just three days ago, US envoy calls on Senator Sami ul Haq (AKA the Godfather of the Taliban) at his Rawalpindi residence.

Taliban are now friends of the Western alliance and doing their bidding against their arch foe Iran in the Syria theater. Just like Taliban were used against the Soviets in Afghanistan. Pakistani Taliban have set up base in Syria.

Look at all the glee of all the monsters and men disguised as anchors, journalists, and pundits who now swarm the scene to rejoice in the plight of Altaf Hussain, while the continue to humanize the hate mongering Sipah Sahaba. Where was their joy when Bait Ullah Mehsud, Osama bin Laden, and Wali ur Rehman were killed? Where was their anger when 14 girls were butchered in Quetta and injured were abandoned to die in the hospital? Where was their self-righteousness when Malik Ishaq was released and abetted?

Pontificating that is of little use to people plotting to survive against odds in the battlefield that is Karachi. War does not afford luxury of objective analyses, it is about making choices.