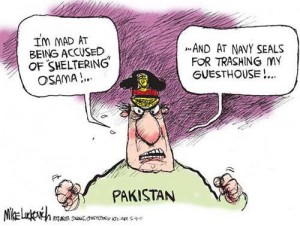 While addressing 123rd PMA Long Course at Kakul, Abbotabad, on 23rd April 2011, General Kayani, the COAS informed that the backbone of terrorists had been broken. One thousand meters away in a fort-like structure, master terrorist Osama Bin Laden smiled and thanked God and his “vice-regents” for protecting him at a secure refuge.

The structure which housed the most wanted man on planet Earth was constructed in 2005 and its main occupant was residing there for the last 6 years. However, quite intriguingly, none of the intelligence outfits ever noticed and thought about the conspicuous structure of the house and its mysterious residents, despite the fact that it was located at a sensitive place in a garrison town. However on reliable intelligence input, a covert operation to take out Osama Bin Ladin was carried out by US navy SEALS team 6 on the night of May the 2nd, 2011, with ultimate professionalism.

President Obama and his National Security Team witnessed the entire operation live on a large screen in the situation room of the White House.

The US choppers took off from Jalalabad and remained within Pakistan airspace for more than 2 hours which included the ground operation which continued for 40 minutes. By 1.45, after its successful execution, they were back in Afghanistan. While at 3.30 AM, Admiral Mike Mullen, Chairman JCS informed General Kayani, the COAS and Leon Panetta, Director CIA intimated General Pasha, the DG ISI, as to what had happened in their backyard.

At 7 AM, President Obama informed Zardari, the Supreme Commander of the Armed Forces about developments which had taken place in Zardari’s own country.
The security breach was unprecedented. However, the ISPR went into hibernation, while those primarily responsible for the defence of this country were mum. Understandably, the contractor Noor Mohammd, who built the house where Osama lived, was taken into custody and quizzed by the intelligence.

He was later released. In addition, a corps commanders’ conference was also summoned for the following week which conducted an ex-post facto analysis of the US operation.
I recall in 1987, Mathius Rust a 19 year old boy from Germany flew a Cessna all the way from Helsinki to Moscow’s red square, eluding Soviet air defences. 2000 heads rolled, including the Soviet Air Chief and the Defense Minister. How safe was this country and its people. Everybody was asking this question.

Almost 2000 billion is the revenue which the FBR collects in a financial year, out of which 1000 billion is sliced away by the military. The defence budget is more than health, education and social sectors combined. Since 9/11, US dollars amounting to 11.5 billion have also been disbursed to our military establishment by the Americans. No audit and no parliamentary oversight were ever allowed by the khakis as to where this huge sum was spent. We would never know what happened to our hard earned money spent or perhaps wasted in the name of defence. But we do know that having eaten away billions and billions of our money how this institution has performed.
“They are involved or they are incompetent” is how Leon Panetta, the CIA Chief described our security establishment. Well Mr. Panetta, please correct yourself. “They are both”. Deeply involved when it comes to linkages with terrorist organizations and excessively incompetent when professionalism is the need of the hour.

First let us look at Panetta’s second observation on the level of competence of our security establishment:
In 1947-48 our army, with the help of tribal “lashkars” invaded Kashmir, and after suffering heavy casualties withdrew. In 1965 they again launched Operation Gibraltar in Kashmir without realizing that India might open up a front on the international borders, which precisely happened and they began shouting for a ceasefire.

In March 1971 they initiated a military action in former East Pakistan and then attacked India which ultimately resulted in the humiliating surrender of around 90,000 of our regular troops and paramilitary .In Feb, 1999, when Nawaz Sharif was meeting Vajpayee in Lahore, a dirty game was being planned in Rawalpindi to sabotage the peace process. Kargil followed, which resulted in another shameful defeat.

Musharraf later begged Prime Minister Nawaz Sharif to secure a safe exit for the beleaguered troops on the ridges of Kargil, and some face saving, if possible. Nawaz Sharif then went to US in July 1999 and on American intervention, India gave concessions for a safe withdrawal.

I remember Z.A Bhutto brought those 90,000 POWs back home from Indian jails, whom they hanged 5 years later. Nawaz Sharif ensured their safe exit from Kargil, who was deposed and jailed after 3 months.
In 1988 more than 100 innocent civilians got killed as an ordnance depot blew up under mysterious circumstances right in the heart of Rawalpindi at Ojheri Camp; again an indicator of professional incompetence.

As per tradition nobody was held accountable, rather an arguably honest and efficient Prime Minister Mohammad Khan Junejo was sacked as he wanted to institute an inquiry commission.
This nation is totally blank on the blunders and goof-ups committed by our military during various conflicts, as all documentary evidence on the conduct of war is rendered classified. We might never have known the facts had the Hamood-ur-Rahman Commission Report not smuggled out of the country and published from India.

However, we all know the sacking of elected leaders, conspiracies to form various alliances like the PNA, the IJI and the MMA. Forming militias and instigating in-fights, blackmailing of politicians, buying media persons, eavesdropping, harassment of individuals, missing persons, illegal detentions while enjoying a life full of luxury. Double pay packages,2 weekly holidays, golf clubs, polo grounds, sauna baths ,clubs and swimming pools, tennis courts, DHA’s, agri lands, own colleges and universities, banks and insurance companies, airlines and shopping arcades, illegal occupation of government land, special privileges, foreign tours, prized appointments after retirement and no accountability.
Will somebody ever be held accountable and charged for what happened inside our territory on the night of 2nd May 2011 in Abbotabad?