On Twitter, facebook and other forums, various pro-establishment persons including Ejaz Haider, Mosharraf Zaidi, Adil Najam, Huma Yusuf, Arif Rafiq, General Talat Masood, Tauqir Hussain, Zahid Hussain etc are currently busy in bullying and silencing Dr. Siddiqa. The above persons along with their US-counterparts and sponsors have also written a letter to the Times of India as a part of their anti-Siddiqa harassment campaign. The content of the bullying letter is reproduced below:

No ISI agent-scholars
This letter is in response to the allegations made by Ayesha Siddiqa in her tweets against Pakistani intellectuals working for think tanks in Washington DC, which were reproduced in an article in The Times of India, ‘ISI has infiltrated US think tanks, Pak scholar says’ (June 30).
The story is based on unsubstantiated but extreme allegations targeting respected scholars. Not a single scrap of evidence has been offered for the vicious suggestion that our colleagues work for the Pakistani intelligence services. This is not the first time Siddiqa has made such accusations and these are not the only people to have faced such attacks. Siddiqa’s action is simply a disgraceful attempt to malign fellow experts with whom she disagrees.
This is only the most recent example of a disturbing trend in public debate where disagreement is dealt with by accusations of someone working for one intelligence agency or the other. Any such baseless insinuations against respected scholars not only harm the individuals concerned, they also undermine free and honest intellectual debate concerning Pakistan. We wish to state clearly that such behaviour has no place in any civilised and democratic discourse, no matter who the people involved are. 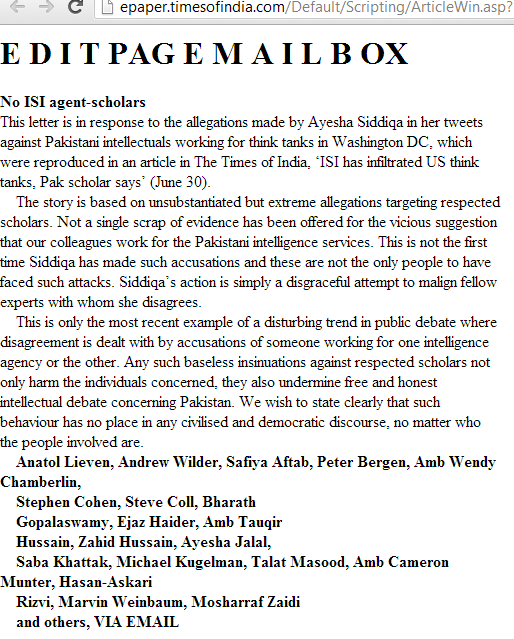 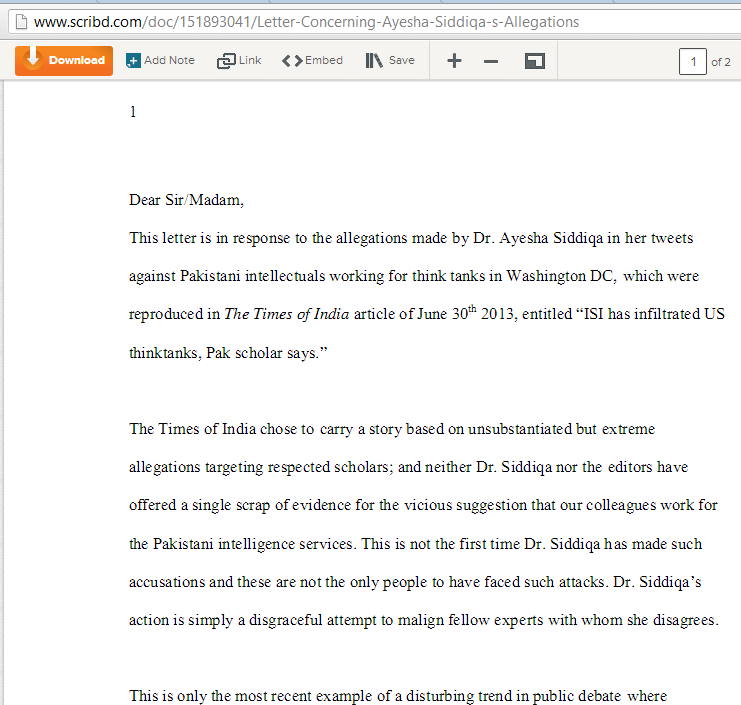 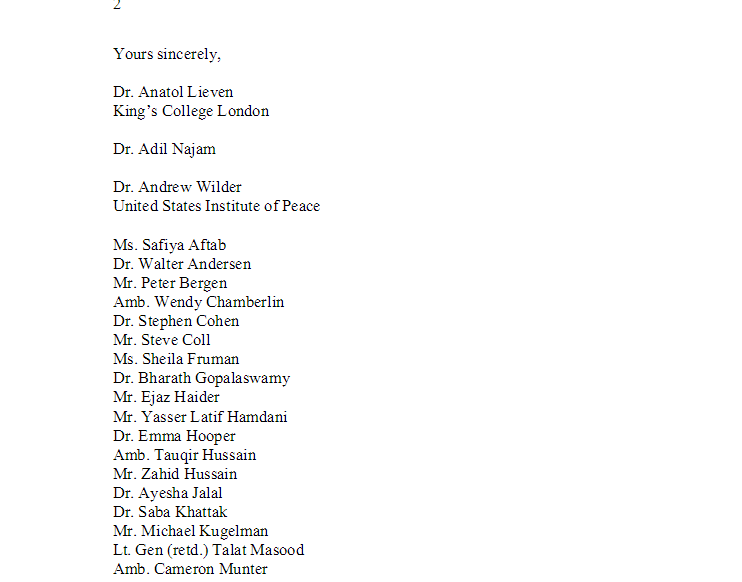 Lieven’s original letter that he circulated to think tank folks begging for their signatures.

Dear Sir/Madam,
This letter is in response to the allegations made by Dr Ayesha Siddiqa in her tweets against Pakistani intellectuals working for think tanks in Washington DC, which were reproduced in The Times of India article of June 30th 2013, “entitled ISI has infiltrated US thintanks, Pak scholar says.”
Dr Siddiqa has not offered a single scrap of evidence for her vicious suggestion that our colleagues work for Pakistani intelligence. This is not the first time she has made such allegations and these are not the only people to have faced such attacks by her. Dr Siddiqa’s action is simply a morally and intellectually disgraceful attempt to slander fellow experts with whom she disagrees. Such baseless insinuations do not only harm the individuals concerned; they also undermine free and honest intellectual debate concerning Pakistan. We wish to state clearly that such behavior has no place in civilized and democratic discourse, and we call on Dr Siddiqa immediately to retract and apologise for her statement.

Despite LUBP’s minor disagreement with Dr. Siddiqa (in particular her participation in programmes organized by the ISI-funded Jinnah Institute, which gives legitimacy to that notorious ISI-front and doesn’t help her own credibility), we fully support her anti-establishment stance and condemn those pro-ISI media persons and analysts who are trying to silence or discredit her voice.

A few days ago, Dr. Siddiqa, Pakistan’s prominent anti-establishment scholar caused a flutter in Washington and Islamabad by suggesting that the country’s spy outfit Inter-Services Intelligence (ISI) has infiltrated thinktanks in the US capital. Dr. Siddiqa, a political commentator and former bureaucrat, whose expose of Pakistan’s military-intelligence’s stranglehold on the country was chronicled in her book ‘Military Inc’, shocked regional experts with a tweets, relating how a Pakistani diplomat had confided to an American six years ago that the ISI had set up funds to infiltrate DC (Washington) thinktanks and ”finally did it.”

”The only problem with this approach is they are sending unqualified people (mostly) to compete with Indians in the US,” Siddiqa continued, adding, ”non-PhDs” without any publication record will not be taken seriously in the US capital. She also named Moeed Yusuf, a senior Pakistan expert at the US Institute of Peace (USIP) and Arif Rafique, an adjunct scholar at the Middle East Institute, in her tweets.

A few months ago, USIP worked on a joint report with Islamabad based thinktank Jinnah Institute (alleged to be financed by the ISI via Tameer Bank, directed by Najam Sethi’s employee blogger Raza Rumi), the report recommended that Pakistan and US governments should have dialogue with Taliban paving way for Mullah Omar’s rule in Kabul and Kandahar, consistent with ISI’s agendas.

Siddiqa maintained that her ”only concern is if they have to do it then send people with capacity or grow people inside the system” and said the ”current plan is flop.” For thinktanks, ”the main issue is money, whoever can put down a grant gets the slot,” she said, explaining how Pakistan was making inroads into think tanks.

There has indeed been a perceptible increase in Pakistani experts in US thinktanks and universities over the past decade, many of whom have visible or refined connections with the ISI. Among the prominent Pakistani scholars in Washington DC are Shuja Nawaz, director of the South Asia Center at Atlantic Council (who incidentally is the brother of former army chief Asif Nawaz Janjua) and several former Pakistani diplomats who have rotated in an out of the city.

Former Pakistan ambassadors to US such as Hussain Haqqani and Maleeha Lodhi have done stints at thinktanks, as have former generals-turned-diplomats, notably Jehangir Karamat and Mahmud Ali Durrani. The ISI has already gotten into trouble before for subverting U.S political process when it was accused of funding Ghulam Nabi Fai, a Kashmiri separatist in Washington who was eventually convicted of illegal lobbying after receiving slush funds from Pakistani intelligence agency. The Obama administration cut some slack to the notorious outfit that is often said to work against U.S interests because it thinks it needs its cooperation on various fronts. 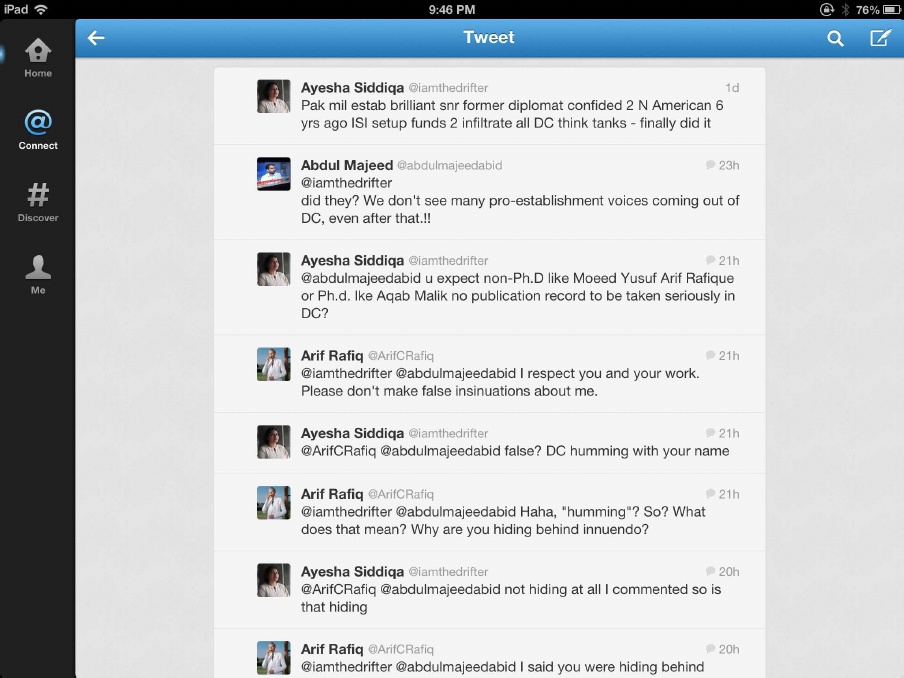 Update: Ejaz Haider, Mosharraf Zaidi and Arif Rafiq seem to have added a few names in the list of signatories in their letter to the Times of India. On Twitter, Michael Kugelman ‏wrote that “A letter published in Times of India lists my name as one of the signatories. I did NOT give my permission to have my name listed. My name was apparently listed in error as one of signatories. Just trying to correct the record.”.

We condemn this act of forgery by pro-ISI media persons and analysts.

Anatol Lieven has been known to have soft corner for Mujahid e Islam Zia ul Haq. The signatories on this letter for the most part seem to be pro Pakistan Establishment. In some ways this lends credence to Ayesha Siddiqa’s stance:

Anatol Lieven has published a new book on Pakistan: Pakistan a Hard country. I had read some nice reviews on the book including one here at Pak Tea House.

I was about to order his book to get his insight into Pakistan, when by accident I came across this obituary he wrote on Zia-ul Haq:

He won respect even from some of his political enemies for his lack of vindictiveness. It was said his repression , unlike that of his predecessor stopped with individuals and was not extended to attempts to destroy their families. From that point of view he had some claim..to be remembered as an honourable man
–Anatol Lieven the Times of London

Needless to say, those last two words made me change my mind…”
http://takhalus.blogspot.com/2011/05/pakistan-anatol-lieven.html?m=1 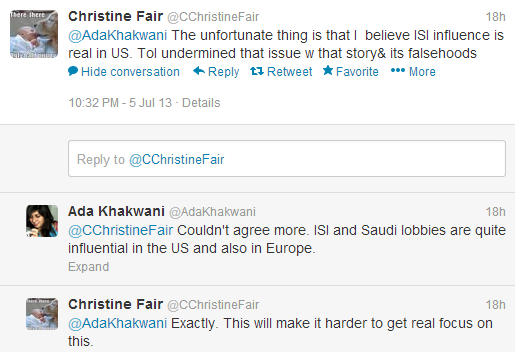