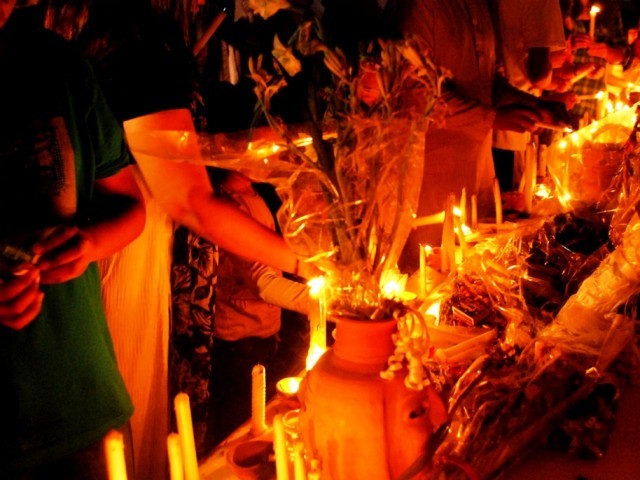 GILGET: scores of people gathered some 300 kilometres from the Nanga Parbat base camp – where 10 foreign climbers and their Pakistani guide were killed by militants – and held a candlelight vigil late Tuesday night.

Civil society members and politicians gathered at Yadgar Chowk and observed a two-minute silence in memory of the deceased and as a token of solidarity with the bereaved families. Adults and children also held placards inscribed with slogans bearing messages against terrorism and in support of peace.

“This is just a humble gesture to express our profound grief over the barbaric incident,” said event organiser Dr Muhammad Zaeem. “We want to tell them (the victims’ families) that we are with them in this hour of grief,” added Zaeem, who is a resident of Gilgit and a Fulbright Scholar on Health Policy and Administration at Johns Hopkins University.

“We are ashamed of what the terrorists did to our foreign guests,” said one of the participants, Saeed Khan.

Another civil society, Zagum Ali Mubbashir said, “The people of G-B have witnessed such a vigil for first time. This is a good omen for peace.”

The attack took place in the early hours of Sunday as gunmen in paramilitary uniform overran a mountaineering base camp and shot dead 10 foreign climbers, including Chinese and Ukrainian nationals, who were resting during a climb up Nanga Parbat, the 9th tallest peak in the world.