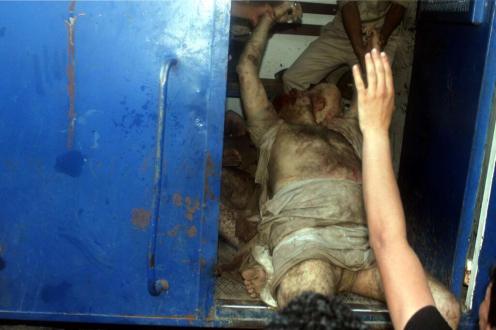 In an unparalleled event, four Shiite Muslims were killed by angry Salafists in Giza. At least 3000 angry locals attacked the houses of Shiites, killing four and injuring 32. Five houses owned by Shiites were also completely torched.

The deaths came on the 15th night of Mid-Shaaban, a holy Islamic night for both Sunnis and Shiites. A top Shiite leader, Hassan Shehata, had been visiting the local village of Abu Muslam in Giza, when angry locals stormed the house he was visiting, throwing Molotov Cocktails and dragging each family member out onto the streets.

Sheikh Hassan Shehata was dragged in the streets after being stabbed and killed. Images showed Shehata being beaten and kicked as his lifeless body was being dragged for show.

Nearby CSF (Central Security Forces) and police officers failed to intervene despite being located meters from the incident.

After the victims were dragged in the streets amid cheering crowds, the locals dumped the bodies to nearby CSF vans, where the police officers simply piled them on top of each other.

Egyptian Shiites have blamed the Muslim Brotherhood for the incident, stating that senior Brotherhood leaders have been using inflammatory rhetoric against the Shiites in recent weeks.

Shiite activist Bahaa Anwar stated “There are not less than three million Shiias who live in Egypt and last Saturday during the Syria solidarity conference attended by President Morsi…Salafist Sheikhs insulted Shias and incited hate against them.”

On Islamic-run television channel, Al-Nas (The People), Salafist host Khaled Abdullah hailed the event and defended those involved in the murder. The host stated that the Shiites in Egypt have often insulted the Prophet Muhammed and have been attempting to convert Sunnis to Shiite Islam.

Popular Salafist-run Facebook page which has more than 640,000 likes, Life is Colored Salafist, also supported the killings, stating that those killed deserved it as they had been insulting the Prophet, his followers, and the wives of the believers. The page also joked and bragged about the incident stating “Hassan Shehata came to spread Shiite in Egypt, then the Egyptians came and took him to the grave.”

Conversely, liberal opposition leader, Dr. Mohammed El Baradei, condemned the attack as “disgusting” and blamed it on inflammatory religious rhetoric.  El Baradei called for the government and Egypt’s top Islamic authority, Al-Azhar, to take all necessary steps to ensure that the incident is not repeated and that those responsible are brought to justice.

These comments were supported by the spokesperson of the Salafist Nour Party, who stated that “the Nour party does not accept the spilling of Egyptian blood or the dragging of it on the streets in such a way. The images shocked us all.” The Nour party also condemned the attack and called for the perpetrators to be punished.

The government and Egypt’s ruling party, The Freedom and Justice Party, have not yet responded to the incident, but the Ministry of Interior has stated that an investigation has commenced. The murders mark one of the worst sectarian incidents involving Shiite Muslims in Egypt’s recent history.