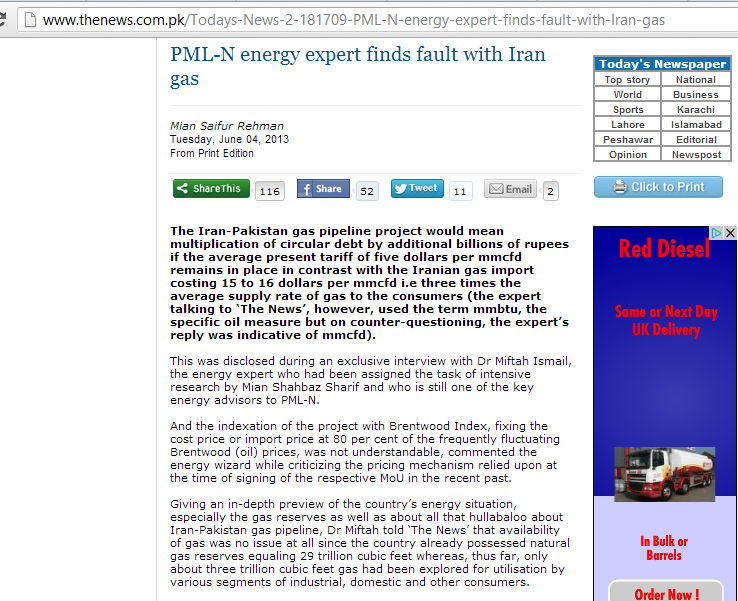 Saudi Arabia and its lobbyists in Washington D.C. made plenty of unfair uproar against the Pakistan-Iran pipeline agreement. https://lubpak.com/archives/234321

Now it is evident that Saudi-backed pro-Taliban PM Nawaz Sharif has decided to annul the pipeline project and is crafting flimsy technical excuses to hide the fact that he has started implementing the Saudi-CIA agenda in Pakistan.

According to a pro-Saudi technical advisor of PML-N namely Miftah Ismail, the Iran-Pakistan gas pipeline project would mean multiplication of circular debt by additional billions of rupees if the average present tariff of five dollars per mmcfd remains in place in contrast with the Iranian gas import costing 15 to 16 dollars per mmcfd i.e three times the average supply rate of gas to the consumers (the expert talking to ‘The News’, however, used the term mmbtu, the specific oil measure but on counter-questioning, the expert’s reply was indicative of mmcfd). This was disclosed during an exclusive interview with Dr Miftah Ismail, the energy expert who had been assigned the task of intensive research by Mian Shahbaz Sharif and who is still one of the key energy advisors to PML-N. http://www.thenews.com.pk/Todays-News-2-181709-PML-N-energy-expert-finds-fault-with-Iran-gas

These are, in fact, other factors and fears which are disturbing the minds of many regarding the future of IP gas pipeline project. The biggest among these is the Saudi factor which many among the media have so far shied away to discuss. But the time has now come to have an open debate on the issue before the IP pipeline project is thrown to the dustbin and the countrymen are left with beating about the bush.

This is no secret that Nawaz Sharif is a blue-eyed boy of the Saudi royal family. If the US is against the project in order to deny a fiscal space to Iran due to its own difference and global political reasons, Saudi Arabia is equally, if not more, inimical towards Iran due religious differences and regional politics. Fears about the future of IP gas pipeline are not that far-fetched. In 2012, Saudi Arabia had reportedly offered an oil and cash “alternative package” to Pakistan for abandoning this project; it is sure to make a final push once Nawaz Sharif assumes the office of the chief executive of the country. http://weeklypulse.org/details.aspx?contentID=3648&storylist=1

Saudi Arabia is said to be against Pakistan’s plans to import natural gas from Iran. But the outgoing government led by the Pakistan Peoples Party rejected this pressure and went ahead with an agreement just days before its term ended. The PML-N chief’s aide said that though Sharif recognises the fact that Pakistan must look at all means to meet its energy demands, he would review the Iran-Pakistan pipeline project. http://www.thehindubusinessline.com/news/international/pmln-will-revisit-pakistans-foreign-policy-sharifs-aid/article4710993.ece

Will the deal survive if the PML-N wins the elections?

The Sharif family feels itself under obligation to the Saudi ruler for the crucial help and hospitality extended to it. Will Nawaz Sharif resist the pressure from Riyadh? Will the PML-N agree to forgo the support of its allies that include clerics dependent on Saudi charities to run their lucrative seminaries? – See more at: http://www.pakistantoday.com.pk/2013/03/15/comment/columns/will-iran-pakistan-gas-pipeline-survive/#sthash.f4INizRB.dpuf

Hope PML-N honors our international business pacts and does not roll back, Iran-Pakistan Gas pipeline and Gwadar port deal with China. We have to show consistency in our international obligations.https://lubpak.com/archives/264281#comment-506771 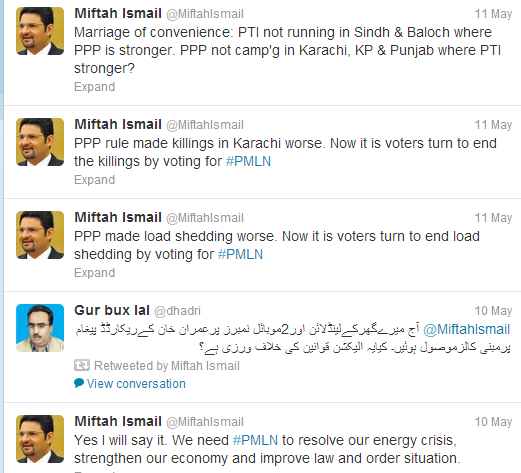