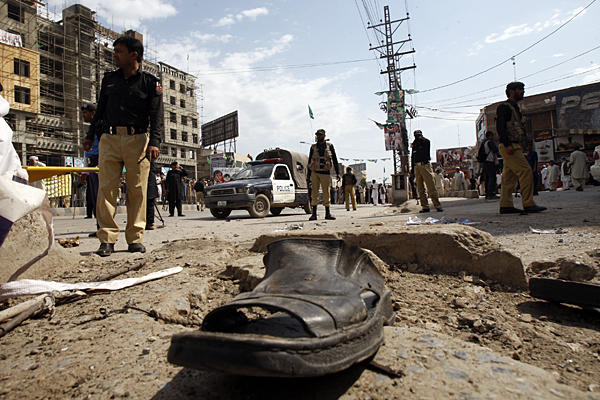 Pakistan’s national elections of 11 May can be regarded as one of the bloodiest and most one-sided electoral exercise in the contemporary history of democracy. The day the election day was announced, the Taliban made a counter announcement: Those parties which did not subscribe to the Tabilanic version of bloodthirsty Islam would not be allowed to campaign. People were warmed against participating in the rallies of ‘evil’ political parties.

These three parties knew what the Taliban meant and what they were capable of. They decided not to  hold a single political rally. Yes. This might appear unbelievable, but the ruling coalition did not hold a single political rally. What they did was hold ‘corner meetings’ which were gatherings of handful of people. These corner meetings were held on short to evade the Taliban snipers and suicide bombers. But the Taliban proved too good for them. They started a campaign of terror killing hundreds of political workers and maimed thousands. The offices of these political parties were attacked. They were reduced to putting up TV commercials because all they could do was buy TV time to plead their cases.

On the contrary, Taliban’s favorite parties like the Jamaat-e-Islami (JI), Pakistan Muslim League (PML), and Pakistan Justice Party (PTI) were given a free hand. They held their political rallies to their heart’s content. Not a single untoward incident took place in those rallies. The media helped the Taliban cause by not uttering the word “Taliban” though a meaningless word “shidat pasand” or “prone-to-violence elements” was bandied about every time a blood-soaked situation was created by the Taliban. At the end of their rallies, the JI, PML, and PTI leaders announced the coming of a New Pakistan while the  PPP, ANP, and MQM workers carried their dead to graveyards.

The Chief of the JI, Syed Hassan, announced at one of the rallies: “Those who call themselves liberals and secular should register with the government as a non-Muslim minority in the Islamic republic of Pakistan”. Thus as a result of an extremely bloody and blatant pre-poll rigging in which the three liberal parties were not allowed to campaign, pro-Taliban parties have won a landslide victory in Pakistan.

After their victory, the parties cheered by the Taliban claimed that the elections were historic. Yes; historic they were. Never in the history of modern democracy so blatant and bloody pre-poll rigging was staged by those who call democracy ‘haraam’ and un-Islamic. But now democracy is good because it has made Islamofascism the winner.