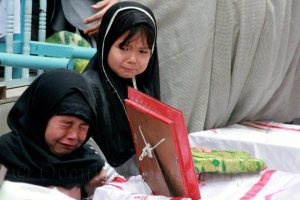 In order to perceptively comprehend some of the dynamics behind the latter day Shia Killings in Pakistan, it is pertinent to read the very insightful report convened by the Government of Pakistan for the yesteryear Ahmadiya killings in 1953, titled: The Ahrar-Ahmadiya controversy Munir Report of the Court of Inquiry 1954.

This report which came to be called the Munir Report, sheds a great deal of light on present matters pertaining to the movement toward Shia kafirdom in Pakistan. The methods used against the Ahmadiyas by the Ahrar almost exactly 60 years ago is a mirror image of the methods being used today by theTafriki-Lej-alphabet-acronym-soup (enumerated in my article: Some Context for What’s Transpiring in Pakistan and What Not to do in the Upcoming 2013 Elections) against the largely defenseless and unarmed Shia Muslims of Pakistan.

The key difference to me between then and now is exactly one (apart from the palpable fact that it was Ahmadis then and Shias now):

And all indications continue to pile up that the Shias are being goaded into militantly rising up (by killing a sufficient number of them) to create a full scaleinternecine war in Pakistan; Muslims killing Muslims once again to fertilize the “shia crescent”. This is beyond any proxy warfare between Iran and Saudi Arabia, and while its seeds are surely planted in the deep seated shia-sunni differences, these spate of shia killings and the accompanying propaganda warfare upon the Shia Muslims of Pakistan is not due to Shia Sunni issue which is fourteen centuries old.

Both of those aforementioned factors that the media harps about, and the politicians variously draw upon with approaching elections in Pakistan, are misleading and calculated red herrings to disguise the real purpose behind this warfare. Unfortunately, due to the media participation in the New SAVAKproject, more and more Shia and Sunni public are both getting confused about it.

Don’t get confused —- it is a fabricated war along the Hegelian Dialectic that I have by now surely explained to death on my website and have now stopped explaining altogether. It’s like kicking an already dead dog to death.

But if you do not understand Hegel, you cannot possibly make sense of any of the apparent insanity in Pakistan. It is not insanity, but a calculated game-theory laced warfare being waged upon Pakistan to create a perpetual enemy for the West.

In the next five years, there will likely arise a “Hezbollah” Pakistan in reaction to the oppression by the New SAVAK in Pakistan, and that is more than arm chair prediction. It is an inevitability if the oppression upon the Shias of Pakistan continues.

One can see that the Shias of Pakistan have been the most docile of communities in Pakistan, largely self-obsessed in their rituals and silently minding their own business amidst all the war on terror being waged upon the world by the mightiest tyrants in the world despite their lofty principled sloganeering that has defined the shia ethos for fourteen centuries. One is forced to wonder why Shia militancy is being “tickled” into existence if not to bring to fruition the long awaited “shia crescent”.

Two matched and armed to the teeth nemesis will paint Lahore to Karachi more red than Peshawar to Quetta have been painted thus far unilaterally by the “new Ahrar” and the “new SAVAK”.

A smart self-respecting people will surely always rise to defend themselves — but simultaneously, also refuse to be used as stooges and patsies by declining to become the West’s perpetual enemy.

To not make the same national suicidal mistake as Iran takes a lot more wherewithal, national sha-oor, than has been publicly displayed by even the finest in Pakistan. For a nation not known for either the abundance of its intellectual prowess, or the superfluity of its noble integrity, it is not hard to perceive that Pakistan was stochastically designed to be DOA (dead on arrival) into this world.

I will end by quoting the last paragraph of the Munir Report, and if what it says was true then at the very inception of Pakistan, only the janaza (funeral)remains to be recited (I hope of course that I am wrong and persons of great commonsense will miraculously come to the forefront of national leadership to untie the Gordian knot so craftily tied on Pakistan’s destiny on the Grand Chessboard):

“And it is our deep conviction that if the Ahrar had been treated as a pure question of law and order, without any political considerations, one District Magistrate and one Superintendent of Police could have dealt with them. Consequently, we are prompted by something that they call a human conscience to enquire whether, in our present state of political development, the administrative problem of law and order cannot be divorced from a democratic bed fellow called a Ministerial Government, which is so remorselessly haunted by political nightmares. But if democracy means the subordination of law and order to political ends—then Allah knoweth best and we end the report.”