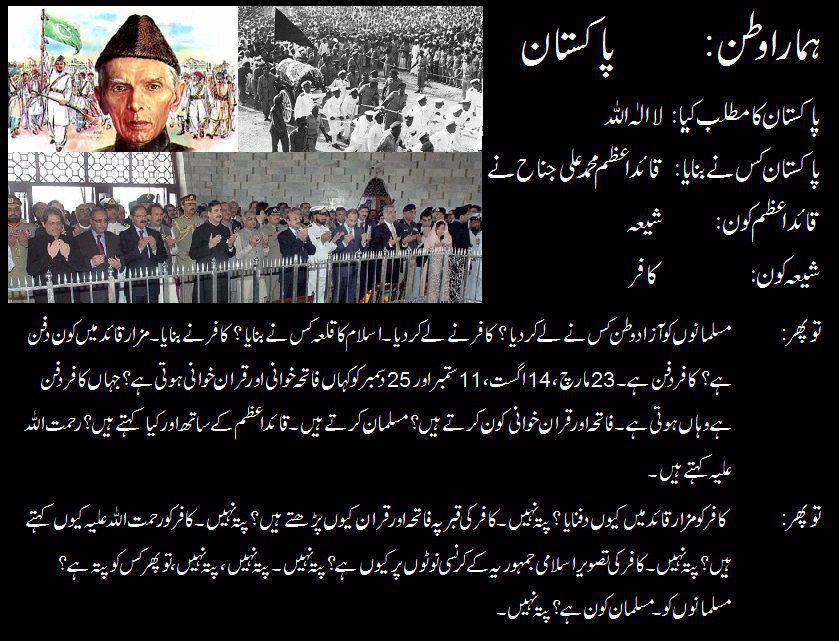 Few months back before the Abbas Town Massacre we had couple of political parties namely JUI(F) & ANP hold two different APCs to demand that government of Pakistan negotiate with the TTP. The news media which primarily is dominated by right wing elements decided to run with the news & carefully enunciated that the negotiations to be had are with the Pakistani variant of Talibans; who are the primary perpetrators of terror acts against the Pakistani state and the civilian population in KPK.

Not only did the media masterfully avoided the most pertinent of questions regarding these terrorists, we also had the so called scion of change Imran Khan go one step further and carefully delineate the difference between Taliban and the sectarian monsters who had just ravaged Abbas Town. Surprisingly the out of power and mostly out of sorts Imran Khan has been the only national leader, who has openly condemned and called out the Lashker-e-Jhangvi for its ongoing campaign against Pakistani Shiites.

And here lies the central problem with the argument Imran Khan presents; negotiate with the Taliban however handle the sectarian LEJ which by the way is just a euphemism for ASWJ, with iron hands. So it begs the question; is Imran Khan knowingly confusing the actors or is he as clue less as some liberals claim he is ? Not only Imran Khan we have the whole editorial staff at The Friday Times; allegedly the most preeminent English publication in Pakistan doing the same.

Unless our strategic thinkers and liberal intelligentsia has been living under a rock; one has to be clinically blind to not see the natural connections between the TTP and ASWJ. There is absolutely no reason to deny the facts which are right there in front of us, there is no LEJ, however there is a very active and robust ASWJ which shares the same ideological roots with the so called TTP. Furthermore this idea being peddled by Pakistani media and the establishment that this boogeyman of LEJ is responsible for all what is happening to Pakistani Shiites is utter canard.

Fact is that radical takfiri Deobandi ideology is what fuels both TTP and ASWJ, even though YouTube might be blocked in Pakistan, one can easily find takfiri speeches by not only the ASWJ brass but also by TTP on the other media sites. Both these groups openly display their disdain for Shiites of Pakistan and their desire to shed more innocent blood. Not only do TTP and ASWJ share a mutual hate for Shiites they equally despise the majority Sunnis of Pakistan; fact is that they are one and the same.

The Link above again illustrates the fact that there is no discernible difference between the two Takfiri groups except for semantics peddled by the establishment and the “free” media of Pakistan. Furthermore the more disheartening part is, that there is absolutely zero consensus in Pakistan over how to deal with these terror outfits, sadly the established media adds to the false narrative further eroding any political will; if there was any to begin with.

One person who highlights the problem with the liberals in Pakistan is Ali Kamran Chishti. Writing for TFT and using his Twitter handle Ali K Chishti fancies himself as a liberal opinion maker, most of his work regarding terror diva Afia Siddiqui is commendable however when it comes to ASWJ he is horribly on the wrong side of the argument. The sheer reverence he affords to ASWJ brass is disgustingly nauseating. A.K Chishti’s lack of clarity vis-a-vis ASWJ and its terror activity border on shameless.

So here is the question every sane minded Pakistani should ask folks like Ali Kamran Chishti and the potential leader of the beleaguered nation Imran Khan; are you intentionally confusing the Pakistani masses or are you just plain stupid ?

The past 5 years have been especially tough on Pakistani minorities specifically Shiites. To be perfectly honest PPP can not be absolved of the sheer hapless incompetency with which it has handled this issue. to add to the misery, national Shiite leaders haven’t helped either by misappropriating the blame. one thing which Pakistani nation desperately needs is clarity and much needed honesty.