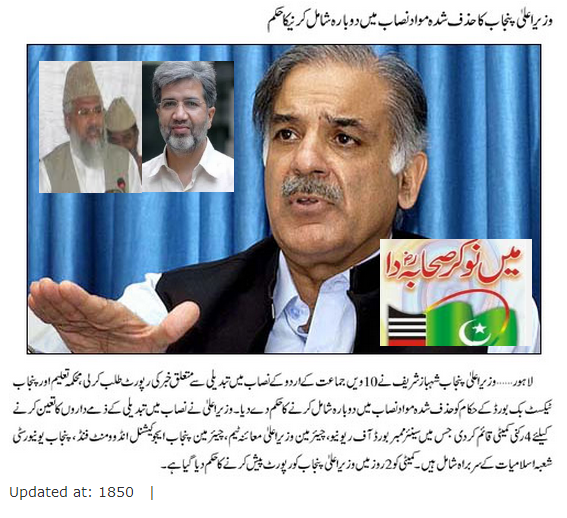 We regret to announce that in response to a joint protest by Deobandi militants of the Sipah-e-Sahaba (ASWJ-LeJ) and their right-wing lackeys in the Jang Group (led by Ansar Abbasi Deobandi), PML-N led Punjab government has decided to cancel the recently implemented reforms in the school curricula. In the meanwhile, Shahbaz Sharif’s paid and unpaid (liberal-secular seeming) promoters and consultants are completely silent on this entire episode.

The change was motivated by a desire to remove the menace of Islamist and sectarian violence (by Deobandi militants of the Sipah-e-Sahaba ASWJ-LeJ and other militant groups) from the curricula.

For example, the following chapters were replaced with more inclusive chapters on literature, civic and ethics.

The new edition of the ‘Urdu compulsory for 10th class’ does not include the very first chapter of the earlier edition’s prose i.e ‘Hazrat Umar Farooq (RA)- a great administrator’ by Allama Shibli Naumani. The new text book’s first chapter is an essay on writer ‘Mirza Muhammad Saeed’ written by Shahid Ahmad Dehlvi.

The second chapter in the old edition was on ‘Ideology of Pakistan’ written by Dr Ghulam Mustafa Khan. This chapter highlighted the Islamist basis for the creation of Pakistan and endorsed that the country was created in the name of Islam, to make it an Islamic state, has been replaced by a new chapter on ‘Princess of Paristan’ (Paristan ki shahzadi) written by Ashraf Saboohi.

The third chapter of the old edition of the 10th class text book was ‘Musaddas-e-Hali’ written by Moulvi Abdul Haq. This chapter narrates how a Muslim poet in the 19th century influenced the hearts and minds of the Muslims. It has now been replaced by a writing of Dr Waheed Qureshi on ‘Eidul Fitr in Urdu Literature’ (Urdu Adab main Eidul Fitr).

Similarly the chapters like ‘Sacrifice’ (Eisaar) by Deputy Nazir Ahmad, was removed from the new 10th class text book. The story is about a Muslim child who distributed his Eidi to a poor family.

Another chapter of the old book ‘Fatima binte (daughter of) Abdullah’ written by Mirza Adeeb has also removed from the new Urdu compulsory of class 10 for Punjab students. This story was about a 10-year old daughter of an Arab leader Abdullah. The story is about Jihad and the young Muslim girl’s urge to help the Muslim Mujahideen (warriors) in Jihad against non-Muslim forces. The girl was martyred and did her parents proud. Allama Muhammad Iqbal too wrote a poem on this young girl with the title ‘Fatima binte Abdullah’. Allama presented her as a role model for Muslim youth.

A chapter Nam Dev Mali was, instead, included in the book that was about an expert Hindu gardener who was killed when attacked and stung by honey bees. The writer of this short story Maulvi Abdul Haq described the death of the expert Hindu gardener as ‘having embraced Shahadat (martyrdom)’.

One of the chapters in the old edition was about ‘The deprived of inheritance’ (Mahroom-e-Virasat) by Allama Rashidul Khairi has also been excluded. This chapter focused on women’s rights in Islam.

One chapter called ‘Travelling is the key to success’ (Safar Kamiabi ki Kunji hay) written by Moulana Abdul Haleem Sharar, has also been removed. It covered the adventures, jihad, travelling etc of the great Muslim leaders.

A chapter on the ‘words of poets’ (Shaeron ki batain) in the old book has also been removed. The chapter presented different aspects particularly self respect of Muslim poets.

On the poetry side all the Islamic poems including ‘Rabe Kainaat’ of Maulana Altaf Hussain Hali, Tulu-e-Islam of Allama Iqbal, ‘Mohsin-e-Insaniat’ of Mahirul Qadri, ‘Siddiq (RA) on Hazrat Abu Bakar Siddiq (RA) by Allama Iqbal, ‘Shaan-e-Taqwa’ (which is against drinking) by Allama Iqbal etc have also been removed in the new text book.

Two ghazals of Khawaja Mir Dard on Islamic Sufism were also removed from the new text. Poetry of a Indian poet Firaq Gorakhpuri has been included in the text book and the poet is presented as a hero awarded by the Indian and Russian governments.

While the title page of the book contains the picture of Allama Iqbal, it does not contain any of his poetem. Excluding overly Sunni Islamist poetry, the new text book, however starts with a Hamd (praise of Almighty Allah) and Naat (praise of Hazrat Muhammad — PBUH).

Unfortunately, despite a plethora of paid and unpaid secular consultants and prmoters (Raza Rumi, Marvi Sirmed, Mosharraf Zaidi), Shahbaz Sharif (CM Punjab) deemed it fit to cancel the secular and inclusive reforms in the school curricula. 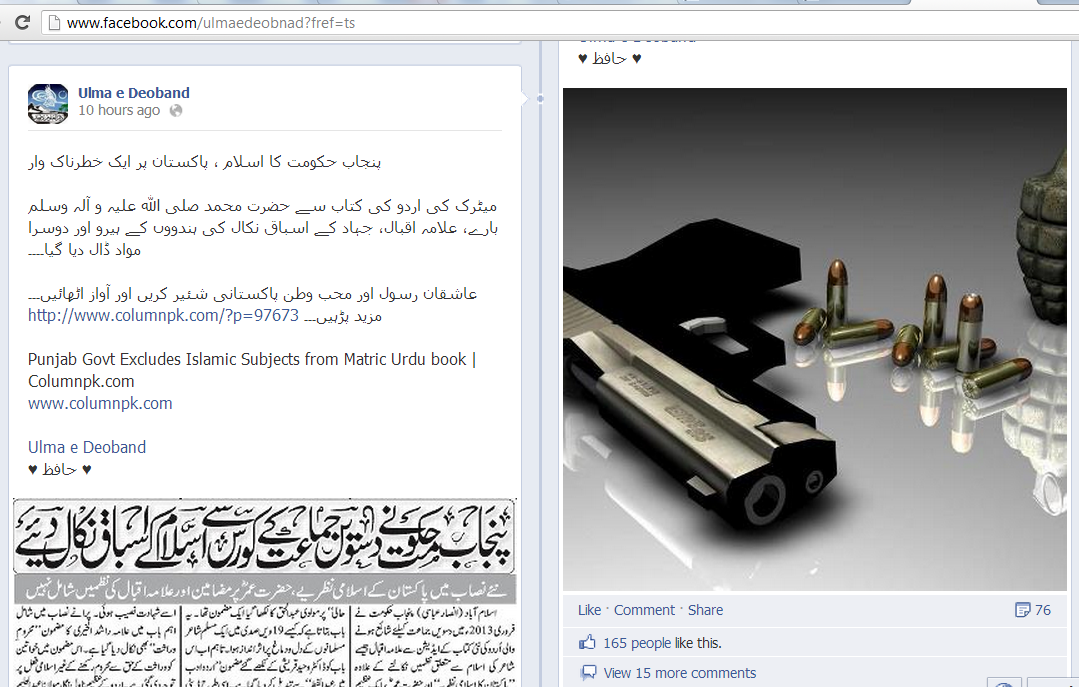 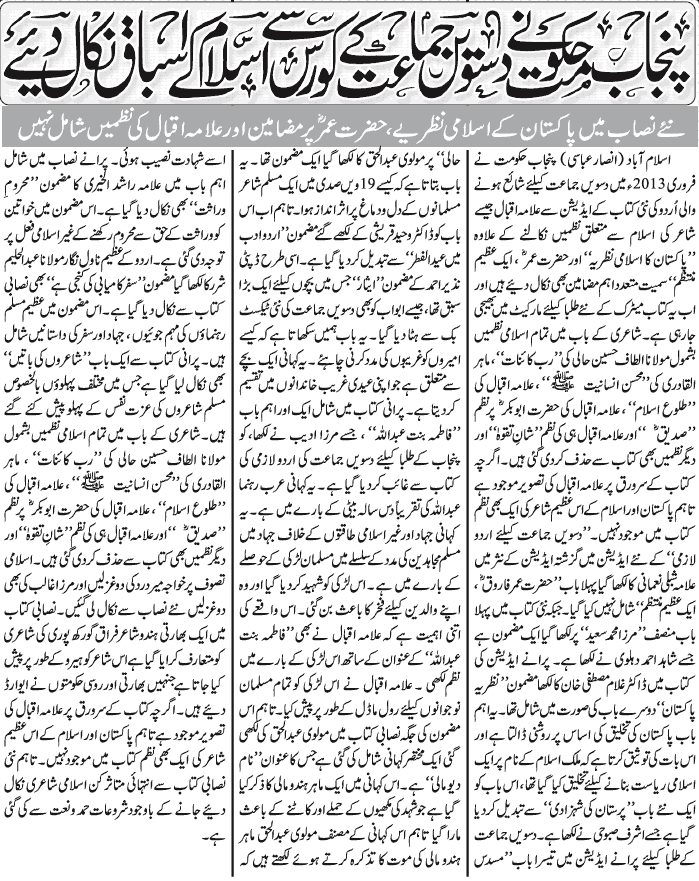