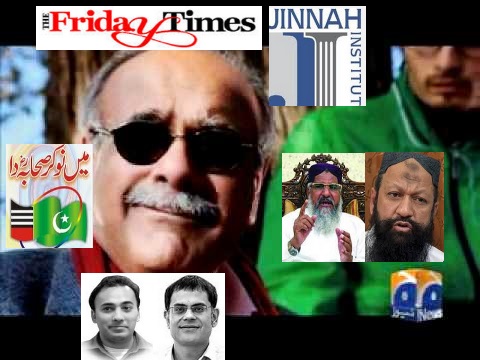 Only one week ago, Najam Sethi published an interview of the head of the Sipah-e-Sahaba (ASWJ-LeJ) terrorist cleric Ludhianvi Deobandi in his notorious The Friday Times. In that interview, the Mullah Ludhianvi Deobandi openly called for the destruction of the Shias by justifying the “Shias are Infidels” (Shia Kafir) slogan.

A few weeks before, Sethi invited the same Islamofascist Ludhianvi on his talk show on Geo in which he was given ample opportunity to express his Islamofascists views which directly contravene the UN Declaration of Human Rights, which criminalizes ethnic cleansing.

A lot of criticism was made of Najam Sethi’s shameless promotion and humanization of the Takfiri Deobandi militants. But he did not express any regret for his criminal complicity with Islamofascists. In fact in the shape of Raza Rumi, Mohammad Shehazad, Ali Chishti, Ejaz Haider, Aamir Rana and others, Najam Sethi has produced an entire breed of pro-establishment writers and bloggers who shamelessly obfuscate Shia genocide at the hands of Deobandi militants as a Sunni-Shia sectarian or Hazara specific ethnic issue while hiding the fact that Deobandi militant are killing not only Shia Muslims but also Sunni Barelvis, moderate Deobandis, Ahmadis, Christians etc.

No political party which has anything to do with human rights will have any trucks with Najam Sethi who is a very dangerous man too. Being an English-literate educated man and in the good books of Western powers such as the United States and the United Kingdom, he is set to play a very useful role for ASWJ-LeJ in future. His backing by the Saudis is a matter of time now.

In such as situation, the PPP has nominated him for the caretaker chief minister of Punjab, a nomination that was hurriedly agreed to by Sipah-e-Sahaba’s allies in PML-N. This comes as a big shock to those who have been endeavoring to make Pakistan a peaceful, tolerant and pluralist country. By nominating him, the PPP has proved that it is either an insane party or is a left-of-the-centre face of the ASWJ-LeJ. Recently, it was the PPP government which nominated another Islamofascist Hafiz Tahir Ashrafi Deobandi to the Islamic Ideological Council.

By the way of introduction, Najam Sethi is the same man, who on the behest of the ISI, led anti-PPP campaign in the media to undermine the elected government of Shaheed Benazir Bhutto. This is what Sethi wrote about Shaheed Benazir in The Friday Times in July 1996:

No law, no judgment, Ms Bhutto seemed to crow, the SC could go jump in a lake for all she cared. A couple of days later, the PM made the astounding charge that the opposition was trying to induce the judiciary to throw her out of office by tempting a few judges with offers of prime ministership and chief ministership.

Ms Bhutto is in a spiteful, unrepentant mood. Since the SC adjudged many of her judicial appointments to be illegal, she has stormed into the Presidency time and again to insist that President Farooq Leghari should immediately fire (‘de-notify’) CJ Sajjad Ali Shah. Thus far, fortunately, President Leghari has refused to heed her advice. If the PM is bent upon committing hara-kiri and taking the system down with her, he seems to be saying, he will have no part of it.

The spirit of the constitution, which envisages meaningful consultation between the CJ and the PM over such matters, was blatantly violated by Ms Bhutto. The personal undertones which have crept into the conflict are also known to everyone.

But Ms Bhutto is in no mood to listen to President Leghari. In fact, she went so far as to belittle him by filing a rude reference to the SC on his behalf without even showing him the draft for approval.

This is not the first time President Leghari has given good advice to the PM and been snubbed for his pains. He has told her countless times to run a clean and efficient ship. He has begged her to fire all the corrupt and inefficient bureaucrats who are leading her, and the country, to the precipice of disaster. He has tried to stop her from committing the government to some highly suspect deals. And he has made no bones about his view that the prime minister’s husband should keep a low profile and not interfere in the running of government. But the PM has turned a deaf ear to all his pleas. Thus has the dangerous deadlock between Ms Bhutto and Justice Sajjad Ali Shah led to a widening gulf between Ms Bhutto and Mr Leghari.

It cannot be easy for Mr Leghari to show his displeasure against Ms Bhutto in public. He was her loyal deputy for 17 years and owes her for elevating him to the Presidency. He is also on record for opposing an interventionist Presidency which exploits the 8th amendment. It is also conceivable that Mr Leghari may hold the opinion that the options to Ms Bhutto — Nawaz Sharif, Imran Khan, the ‘Babas’ or, indeed, the khakis — are no options at all. What, then, should he do?

If Mr Leghari’s public silence is predicated on such personal and political considerations, he should consider the other side of the coin. If he is honest to himself and to the nation he heads, Mr Leghari must realise that he owes immeasurably more to the office he occupies than to the person who put him there. He should also know that time and tide wait for no man. The longer he condones, or appears to condone, Ms Bhutto’s rash and unacceptably autocratic and corrupt behaviour, the more he risks being ignominiously sidelined along with her in the future. Indeed, unless Mr Leghari is also cut from the same cloth as the rest of the servile bunch around Ms Bhutto, the President must stand up and be counted. Now.

It is really quite simple. The prime minister, Benazir Bhutto, is leading this country to constitutional chaos and administrative mayhem. The President, Farooq Leghari, must stop her from doing so.

Almost 19 years later, it was none else than Najam Sethi’s wife Jugnu Mohsin and his paid employee Raza Rumi who jointly insulted Benazir Bhutto’s memory, alleging her of financial corruption and political immaturity, in a programme aired by Mir Shakil-ur-Rehman’s Geo TV. https://lubpak.com/archives/247277

If the PPP has stooped as low as it has by nominating Najam Sethi, why did it not nominate Malik Ishaq Deobandi for the caretaker Prime Minister? Malik Ishaq has killed hundreds of Shias. He calls them Kafir and says he will crush them. At least he is an honest person. He openly advertises his thirst for Shia blood. On the contrary, Sethi is a crypto-Islamofascist. He is a hypocrite who poses as a campaigner of human rights, but is as evil as Malik Ishaq Deobandi, and in many ways even worse than him.

The PPP has no shame. Shias, Sunni Barelvis, moderate Deobandis and Salafis, Hindus, and Christians should not vote for it. 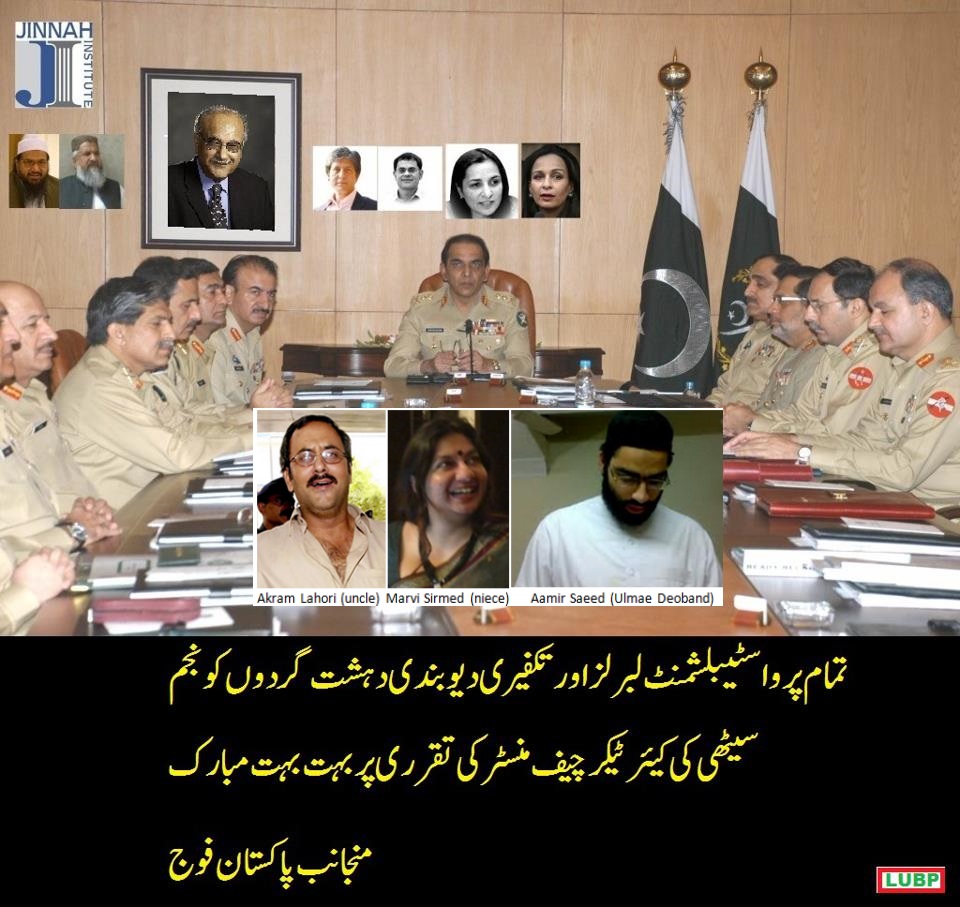