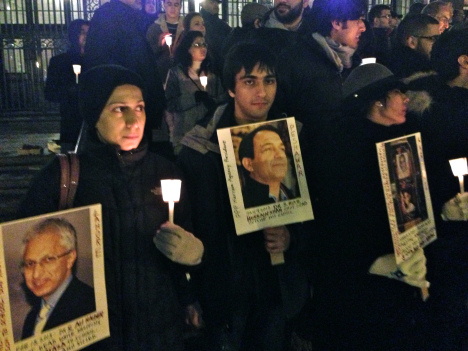 Students and professionals in the Boston area organised a well-attended vigil on Friday evening in solidarity with Pakistan’s Shia Muslims and in protest against the ongoing target killings. A heavy snowstorm cleared up hours before the candlelight vigil at picturesque Copley Square in downtown Boston that some participants travelled for hours to attend.

Banners and placards at the vigil proclaimed: “We Are All Hazara”, “Stop Shi’ite Killings in Pakistan”, “I Stand Against Genocide. Where Do You Stand?” “Americans Against Shia Killings”, “When Will Thinking Replace Klling”, “We Want Peace”, and “Power to the People”.

Some held placards with photos of people killed recently in Peshawar, Quetta, Lahore and Karachi.

Syed Shehroz Hussain, 19, held a placard with a picture of his father Dr Syed Riaz Hussain, PPP Kurram Agency President, shot dead outside his clinic in Peshawar on Jan 10 this year.

The targeting of Shi’ite Muslims was “not a new phenomenon. It has been going on for as long as I remember,” said Shehroz, who is a freshman at a technical college in Massachusetts.

He said that Dr Hussain was “an ordinary doctor who wanted to help the people. He could not afford a bodyguard and kept asking the government for protection but got no response.” He had survived two assassination attempts in 2008, leaving him with injuries that prevented him from contesting the last elections.

A week before Dr Hussain was killed, he had called Shehroz to say he was expecting to a “landslide victory” in the forthcoming elections as the Sunnis, Hindus and Christians in the Shia-majority in Kurram Agency had pledged to support him.

“This is not a vigil of Shias for Shias. It is a vigil for humanity, a vigil of initiative,” said Shehroz, whose words moved many to tears. “I urge each of you to continue the momentum and do what you can to tell people about this issue.”

“This is not just about the target-killing of Shia but in support of all communities of Pakistan,” said Batool Raza, a student of Suffolk University’s law department, one of the organisers.

I briefly put the situation in context: This is not ‘sectarian’ violence, but target killings by banned extremist militant outfits who are funded largely by money from Saudi Arabia. The recent attack in Abbas Town, Karachi is the latest in a long list of such attacks, which include cold-blooded shooting of Shia Muslim professionals, particularly medical doctors.

The predecessors of these militants had gained strength during the first Afghan war in the 1980s during the Zia years. Wall chalkings began appearing in Pakistan’s cities proclaiming Shia Muslims as ‘kafir’ or infidel. We are reaping the hatred sowed since those years, with the growth of groups like Sipah-e-Sahaba Pakistan, Lashkar-e-Jhangvi and Jaish-e-Mohammad that have become linked to Al-Qaeda and Taliban.

The situation is compounded by poor law and order practices; criminals at the local level not being apprehended, charged, tried and punished because police don’t have the power/training/means to follow through; courts freeing them for lack of ‘evidence’; no witness protection plan.

It is a continuation of the democratic political process in Pakistan that will in the long run, marginalize these elements.

Another organiser, Zahra Saleha Ahmad of the Harvard Pakistan Students Group, said that “growing up Sunni in Pakistan” she had no idea about the dangers other communities faced. “This is not about Shia or Sunni but barbarians hijacking our religion and our country. The moderates must speak out.”

Former ambassador Husain Haqqani who teaches International Relations at Boston University, was unable to attend the vigil at the last minute due to weather but sent a message to the vigil organizers noting that “Increasing violence in Pakistan is a cause of concern to not only Pakistanis, but to all friends of Pakistan around the world.”

“Today, let us not only show respect for the victims of violence and bigotry. Let us resolve to fight the intolerance at the heart of the violence in Pakistan. Only a pluralist Pakistan that respects all religions and all points of view will thrive and succeed. Let us not give up the vision of a pluralist Pakistan, at peace with itself and with its neighbours.”

“I hope people are calling it a Shia genocide, because it’s self-evident. It’s not racial or gender discrimination,” said Sara Sulehri, Professor Emeritus, Yale University, whom I met later. “It’s murder in the name of religion, and it has to be broadcast for what it is.”

Haris Haroon, a student from Lahore at Berklee College of Music performed the piece he wrote after the attacks in Quetta

Participants observed a moment of silence to pray in their own ways before the event concluded with music by Haris Haroon, a student from Lahore at the prestigious Berklee College of Music. He was moved to write the piece after hearing of the attacks on Hazara Shia Muslims in Quetta earlier this year.

Participants signed a petition be presented to the Pakistani Consul General in Boston urging the Pakistani government to take immediate action against the militant organizations carrying out these massacres, empower the police to apprehend the perpetrators; ensure that the judiciary works swiftly to prosecute the perpetrators; and provide substantial compensation to the victims’ families.

The event was supported by student groups at Suffolk, Harvard, MIT, Tufts and Boston universities, besides community organisations like the Alliance for Secular South Asia, the South Asia Center Boston, the Ahmadiyya Muslim Community (Boston), and the Pakistani Association of Greater Boston.