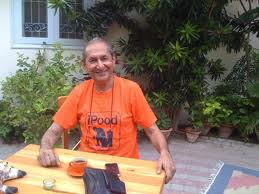 Zaheer Kidvai’s insensitive comments in Tehelka  http://blog.tehelka.com/the-division-gets-worse/ on Shia genocide in Pakistan  are a perfect example of why the world community is so misinformed about this issue.  His comments reek of subconscious sectarian bigotry.  They highlight that instead of informing the world about Shia Genocide in Pakistan, its civil society, intelligentsia and media would rather recycle the manufactured and false discourse of the military establishment.

Kidvai makes the flippant, false and unsubstantiated assumption that LUBP’s identification of the perpetrators being Deobandi has to do with its contributors belong to the Sunni Barelvi school of thought.

FACT:  This identification is by the perpetrators themselves and the ideological support that they have from umbrella organizations like Ulma-e-Deoband http://www.facebook.com/ulmaedeobnad?fref=ts, the largest Deobandi web portal in Pakistan with more than 90,000 followers full of hatred against Sunni Barelvis, Shias, Ahmadis, Christians, Hindus, Jews etc. This identification comes from LUBP always adopting a specific stance as opposed to the vague, wishy washy discourse of Pakistan’s English speaking elitist civil society types.  This identification is based on decades of research instead of the mathematically-challenged insensitive ramblings of subconscious bigots where the ASWJ-LeJ (formerly known as Sipah Sahaba) and Jaish Mohammad have publically aligned and launched themselves from Deobandi mosques and madrassas.

FACT: LUBP’s diverse editorial and contributor panel includes both Sunni Barelvis and Deobandis.  It also includes Shias, Hindus, Christians  Ahmadis.  LUBP has also stood up against the oppression on women, Baloch, Pashtun, Seriaki, atheists and LGBT communities that make a truly diverse Pakistan – in stark contrast to the narrow, myopic world-views of the Punjabi-Muhajir elite that dominate Pakistan’s military-civil bureaucracy and their extensions and flatterers.

In standing up for those who are the victims of State sponsored oppression, LUBP has spared no one.  From political parties (PPP, PMLs, PTI, MQM) to religious parties  (JI, JUI, MWM), LUBP has been vocal in its condemnation.  Unlike the selective moral pandering of Pakistan’s civil society elites, LUBP has also been critical of the Islamofascist Media-Judiciary nexus and its military establishment sponsors.

FACT: Unlike the deeply compromised and vague discourse of civil society and intelligentsia, LUBP has been CLEAR  since the beginning about both the victims, i.e., Shias, Sunni Barelvis, moderate/non-Takfiri Deobandis, Hindus, Christians  Ahmadis, Sikhs  – and the perpetrators, i.e., the State-backed, Saudi funded Deobandi militant networks. These networks which include the Taliban, ASWJ-LeJ and Jaish-e-Mohammad are all interconnected and their terrorists move fluidly from one group to the next.  All of them have been allied with the Al Qaeda since the 1990’s.

The FACT that Zaheer Kidvai does not even bother to once name the perpetrators (ASWJ-LeJ), their specific sect (Deobandism) and the ideology (Takfirism) that guides their acts of violence  speaks volumes about his motives of writing what is essentially a very insensitive and factually questionable article. Conflating Deobandis as Sunnis leads to false Sunni-Shia binary of discourse that only suits the Deobandi militants of ASWJ-LeJ who are not only killing Shias but also Sunni Barelvis and other communities.

The insensitivity continues when Zaheer Kidvai uses a dubious, home-made statistic (with no credible reference) that is nearly a hundred years old to downplay the Shia Muslim population of Pakistan.  This tactic has previously been used by former ISI chief General Hamid Gul to downplay the Shia Hazara population of Afghanistan in the 1990s while they were being massacred by the ISI’s Deobandi Taliban proxies in Bamiyan, Mazar-e-Sharif and Yaekewlung province.

Similar tactics are also used by the Deobandi ASWJ to highlight that Pakistan’s Shia Muslim population is 4% of the total population.

Even if the 100-years old statistic was proved to be right (no credible evidence is presented to us by Mr. Kidvai or ASWJ leaders), are populations demographics a static phenomenon? A lot can change in the nearly century old, pre-Partition  benchmark that Mr. Kidvai uses to downplay the Shia population of Pakistan.  It could be that census surveys were not that reliable a century ago.  However, it seems that Mr. Kidvai needs a basic lesson in maths. If the population of Shias in an “Undivided India” was 2%, it is perfectly reasonable to assume that in Post-Partition Pakistan,  where the Muslim majority is 97%, that the Shia population is at least 10% if not more.  Similarly, the bulk of South Asia’s Shia population resides in what constitutes Pakistan which likely drives the number even higher. If Mr. Kidvai were to compute the percentage of the Muslim population of pre Partition India, I am sure he would come to the same mathematical conclusion that we did.  Or he could still align his perceptions with General Hamid Gul and Deobandi bigots of ASWJ-LeJ.

As for Kidvai’s criterion for separating Shia Muslims on the basis of ethnicity, the less said the better. This is a favourite tactic by Pakistan’s compromised media.   The massacres of Pashtuns in Parachinar, Gilgitis in Kohistan ,  Hazaras,  Balochs, Kandahari and other Pashtuns, Urdu speakers, Punjabis etc  in Quetta and Sariakis in Bhakkar, D G Khan, Khanpur and Sindhis/Urdu speakers in Karachi were done because they were Shia. Their shared belief is the reason and not their separate ethnic identity.

Dividing Shia casualties along ethnic lines serves to dilute the outrage and is a typical dishonest tactic by Pakistan’s establishment and establishment-influence media and intelligentsia.

The unkindest cut in Kidvai’s article was dragging the late Benazir Bhutto’s faith into this discussion.  One can disagree with Benazir Bhutto and President Zardari on many different counts but why should their outrage and condemnation be based on their faith?

Is Kidvai trying to say that Shias should watch out for themselves and only Shia influential should speak out on the ongoing Shia Genocide whereas others like him should continue fudging the issue. For the record, President Zardari, in spite of his government’s helplessness and inability to speak out on this issue has been one of the few leaders in Pakistan to speak out against the general scourge of extremism.  When PPP Minister Shahbaz Bhatti was killed, his Deobandi ASWJ-Taliban murderers specifically threatened Zardari.   Similarly, Kidvai only needs to watch Benazir Bhutto’s last speech to know her clear and unequivocal stance against the Taliban – unlike Kidvai’s civil society friends who were marching with ASWJ/Lal Masjid and General Hamid Gul behind Islamofascist judges.

Aurganzeb Farooqi Deobandi and other Deobandi leaders of ASWJ-LeJ reserve their hatred for PPP and ANP.  As per reports, when Benazir Bhutto was killed in 2007, the Taliban taunted the Turi Pashtun Shias who were resisting them with words to this effect:

“We have killed your mother today”

For Kidvai to drag in Benazir Bhutto into his ramblings was a low blow.

About the author: Jaffar Tayyar Bangash – My heart resides in Parachinar 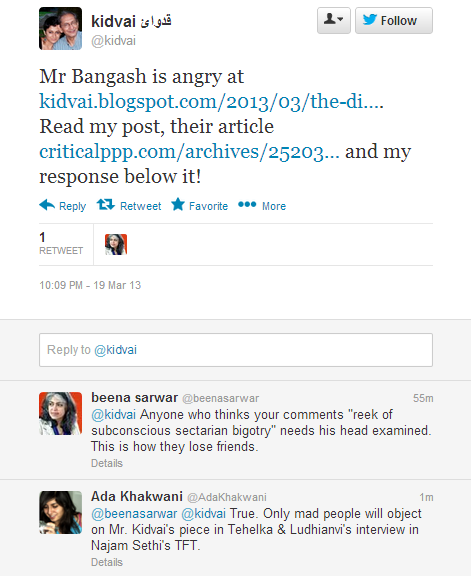