Home  »  Original Articles   »   Four of 70 Shias in the ASWJ hit-list provided to MQM have been target killed so far! 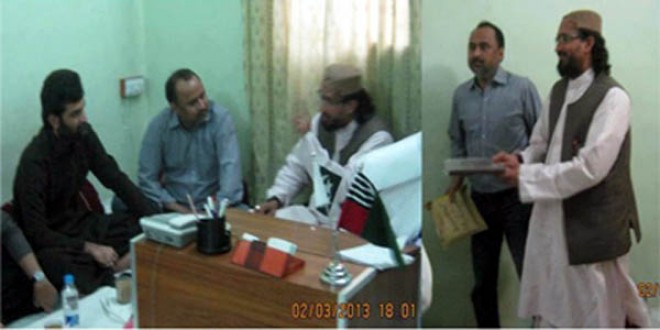 (SHIITENEWS) Four of those 70 Shia Muslims named in the list of outlawed Sipah-e-Sahaba given to the MQM, have been martyred so far.

On March 2, a day before Abbas Town Tragedy, a delegation of the Muttahida Qaumi Movement met Aurangzeb Farooqi, notorious gangster of outlawed Sipah-e-Sahaba (renamed as ASWJ) at his office. The MQM delegates included: Hamad Siddiqui and Waseem Aftab.

A Shia member of the MQM disclosed on the condition not to be named that a list of 70 Shiites was handed over to the MQM by the takfiri nasbi terrorists.

The Shia members of the MQM have complained that despite their loyalty to the MQM and its chief Altaf Hussain, they were being sacrificed for the sake of alliance with the nasbi takfiri outlawed terrorist group SSP. Reports had it that the MQM’s offices were swamped with the followers of nasbi wahhabi ideology and Shia members were being sidelines.

Hamad Siddiqui is said to be one of such biased official of the MQM who is a sworn enemy of Shiites. Shia members are of the views that London Secretariat was also hijacked. They have lodged complaints but those went unnoticed.

Many Shia members of the MQM are running from pillar to the post to save their lives from the killers who are fifth columns of their MQM. They are planning to leave the city and take shelter somewhere else. They are dismayed over ignoring of their sacrifices for the sake of the party and the party chief.

The list of 70 Shiites included the names of Shia Muslims of Gulbahar, Orangi Town, Lines Area and Shah Faisal Sectors.

The MQM always claimed that its leadership is secular and friendly towards Shiites but in practice it always backed the nasbi takfiri wahhabi intolerant fanatics. Governor Sindh who also belongs to the MQM has welcomed the outlawed SSP’s leaders at Governor House and assured them of his support.

Altaf Hussain seems to have failed to overcome the influence of the intolerant fanatics of outlawed SSP within his party. His lack of control over such elements within the party will cost the MQM dearly in the forthcoming elections.