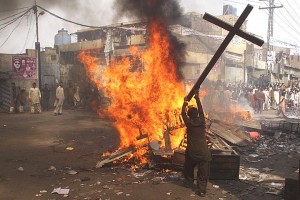 Leading anchors of the Pakistan media continue to obfuscate the truth while homes burn and people loose lives and property. The narrative built  by Mr. Sethi and others is:

1) This is a conspiracy to grab valuable land of Joseph Colony.

2) The buck stops with Punjab Government, to quote Mr. Sethi “full stop”.  Punjab government did not provide the resources to protect Joseph colony and failed to enforce 144 (which would give more powers to the police and allow them to prevent mobs from forming).

Mr. Sethi  is  the leading voice of the “liberal” Pakistani press, if he makes a false move then the entire press is given a license to make such false moves. We saw this with Mr. Sethi’s humanizing of Mullah Lidhanvi by inviting the well known terrorist and hate monger to his show.  Immediately following Mr. Sethi’s show one of his young proteges declared the hate monger and terrorist a messenger of peace. The tone set by Mr. Sethi has important ramifications.

If someone as smart as Mr. Sethi explains to the his consuming audience nine important and and difficult issues, his audience is likely to believe item number ten even if it were a complete lie.

This is what is happening in the above analysis of the atrocities against the Christian community. Mr. Sethi is does not disclose the identity of real estate mafia’s operating in Punjab. These are old thugs of  Sipah Sahaba (now operating as ASWJ or LEJ) Riaz Basra group. The nephews and relatives of Raiz Basa run the ‘qabza’ or land Mafia and are supported by the Army Generals. They need to secure their plots as well.  The Shebaz Shareef government is indeed at fault for not  enforcing 144 however, by obfuscating the Sipah Sahaba (ASWJ /LEJ) role in the “qabz’ mafia, Mr. Sethi and others just make the criminals stronger.
https://lubpak.com/archives/249797