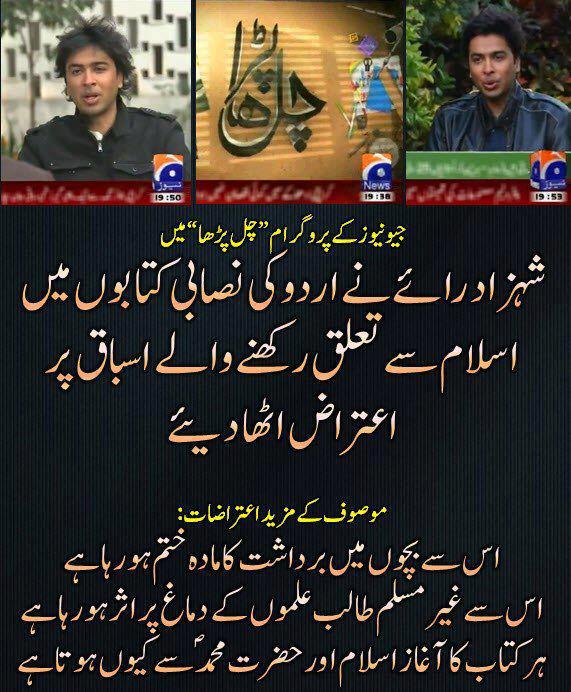 I found it encouraging to see Pakistan’s famous singer, Shehzad Roy, talking publicly against the hate content in the country’s text books. The uproar against Mr Roy from the Islamist and the right wing lobbies, including political parties, is nothing unexpected. What is more remarkable is that a person like Mr Roy is willing to stick his neck out to address one of the major problems in Pakistan – the curriculum prescribed by the government(s) to be taught in the country’s educational institutions. We need many more like him.

I have maintained for a long while that if Pakistan has to survive it is imperative that it confronts and fights the culture of hate prevalent in the country. Now, often this culture of hate starts touching a child’s life in the child’s household as an increasing number of people continue to subscribe to country’s culture of polarization and extremism. However, to me, the single biggest service to extremism is still provided by our textbooks, which afford a child his first encounter with what he truly regards as knowledge.

As religion is the foundation of the Pakistani state’s political ideology; it is also a key area of Pakistani education in which students are taught the interpretation of Islam. Hence, there is clear connection between the violence -especially that inspired in the name of religion- in Pakistan and Pakistan’s education curriculum. Even though, to most of my fellow countrymen Pakistan derives its legitimacy from religion, religion does not have to form an overwhelming part of the country’s curricular content.  If at all, Pakistan was supposed to be a country where Muslims would be free to practice their religion and not a melting pot of religious indoctrination. Misplaced ideology has engendered this country’s quest to be the leading Islamic power and the protector of the faith around the globe. It is now disturbingly apparent that Pakistan has become the hotbed of Muslim militancy and a disproportionately large number of the world’s terrorists, acting in the name of Islam, have been born or indoctrinated and trained in Pakistan.

However this ideology and the resulting curricula were significantly boosted by military dictator Gen Ziaul Haq, who many hold responsible for sowing seeds of discord in Pakistani society on religious and ethnic lines by stuffing school curricula with material that promoted hatred now manifested in the shape of extremism, intolerance, militancy, sectarianism, dogmatism and fanaticism. During Zia`s regime hate material was incorporated into curriculum to inculcate the spirit of Jihad among the Pakistani as well as Afghan students to prepare them for Jihad against the Russian forces. Most of those curricula continue to linger.

What is most important to note here is that it is well night impossible to teach a young mind to hold, let alone balance, contradictory impulses like learning to hate some people’s guts and yet be full of love for others. Or to think of oneself and one’s religion as unequally superior and to not to consider others and their faith as inferior. Or that our religion is a great uniting force, whereas all others are evil dividing forces. A child being imparted such educational campaign is being brought up more than just to despise Jews or Hindus, he is being taught how to hate in general. Tomorrow Shias or Sunnis can also replace Jews and thus the shadow of his malice begins to fall within his immediate reach. When children are taught that it is fine for them to harbour hate or contempt for someone, they subconsciously start paying attention to the negative aspects rather than the positive. When that happens, a child won’t notice the good traits or actions of the others he considers as different, but focusses instead on anything that can be framed in a bad light. If a child is taught to despise a people over nationality or religion, this initial lesson in outward hostility doesn’t just stop there. It also moves towards other people throughout his life as the hate instilled in his very core gets hoisted on to anyone he considers as different or ‘flawed’. We are thus shaping an adult who will be at ease in freely dishing out his/her feelings of dislike towards a lot of people. It is fitting to think of such early indoctrination as hatred bootcamp.

I have also seen that children who are not taught to think for themselves at an early age then grow up to live in a state of denial of all inconvenient truths and facts. This is exactly what has happened in Pakistan. Conspiracy theories and the readiness to throw labels on people or religions provide a perfect refuge in denial. When the kids have been marinating for twelve years or more in the notions of superiority and religious righteousness, it is extremely difficult for any international university or life’s subsequent experiences to reverse or obliterate the effects.

Unfortunately, questioning and getting our syllabi changed is a forbiddingly uphill battle to undertake, but given the enormity of its importance for our future, each one of us has to play a role. Only the curricula that are absolutely committed to tolerance and pluralism can produce an generation educated in true respect for diversity.

Given that each province has its own textbook board, which reviews and approves textbooks for use in both public and private schools, I do hope that provinces like KP and Sind can lead the way in breaking free from this legacy of hate and extremism in the guise of education and knowledge.

Meanwhile, we need many more people to echo Mr Roy.