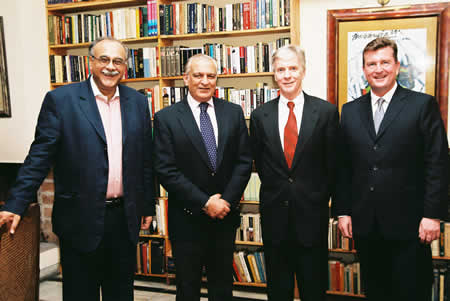 While acknowledging that the Pakistan Taliban, Afghan Taliban and ASWJ are all linked, Najam Sethi made the contradictory observation that the ongoing massacres of Shias in Balochistan are part of an ongoing “Iran-Saudi” proxy war. This is a typical military establishment discourse and has been thoroughly discredited. https://lubpak.com/archives/tag/iran-saudi-arabia-proxy-war-theory

One should ask Mr. Sethi if the Taliban were created by Pakistan or by Iran?

If the genocide of more than 21000 Shias of Pakistan is an outcome of Iran-Saudi proxy war, what does Sethi have to say about the thousands of moderate Sunnis who have been killed in various attacks on Sufi shrines by the same Takfiri Deobandi groups killing Shias?

What about the attacks on Maulana Fazlur Rehman and the threats to Javed Ghamdi? Have they come from Iran or from the Sipah Sahaba Taliban?

Are the attacks on Ahmadi Muslims by the LeJ-ASWJ part of a Raiwand-Saudi proxy war as per Mr. Sethi’s rationale?

This proxy war theory does not stand up to the fact that those groups like LeJ-ASWJ that are massacring Shias are also massacring everyone else. They have been protected by the Pakistani State and for persons like Sethi to regurgitate this nonsense shows his complicity in manufacturing this discourse!

During his show, Najam Sethi kept on selectively blaming the ANP. This is the party that has suffered the most at the hands of the Taliban – in direct contrast to the Pro-Taliban and Pro-LeJ PML N who are often favoured by Sethi. Blaming ANP without appreciating their stand against these extremists and without understanding their constraints is typical dishonesty on the part of pseudo liberals like Najam Sethi. It is typical of his blame-the-victim tactics. The whole world knows that it is NOT ANP but the military establishment and their allied think tanks like the Jinnah Institute that provide support to Taliban and LeJ.

Even someone as proficiently glib Sethi should see the contradictions in all this. For starters, one should ask Sethi as to who is responsible for the Army’s “kill and dump” policy in Balochistan. Did President Zardari give the orders for this?

The whole world knows that the army has been in effective control of Balochistan. One could well argue that this has been the case since the very beginning in 1948.  If the Army does not need the permission of the civilian government for its brutal suppression of Baloch Nationalists or extra-judicial killings of Pashtuns in Swat, why would it need the permission to go after its own LeJ-ASWJ assets?

On Twitter and other media outlets, there is a usual round of applause by the usual suspects (pro-establishment fake liberals affiliated with the Najam Sethi Club) to recycle and circulate his Saudi-Iran Proxy War theory to obfuscate Shia genocide. As a matter of fact, almost all members of the Sethi club continue to obfuscate Shia genocide by describing it as Sunni-vs-Shia sectarian violence, giving it Hazara specific ethnic color, hiding the Takfiri Deobandi identity of LeJ-ASWJ terrorists or deflecting the blame from ISI-sponsored Jihadist Deobandis to Iran-Saudi, India, Israel, USA etc.

Sethi was amongst the first anchors in the mainstream electronic media who provided live coverage to ASWJ-LeJ’s chief Ahmad Ludhianvi’s hate speech against Shias and obfuscation of Shia genocide through his talk show: https://lubpak.com/archives/73439

Here’s an example of how Sethi and his pupils at The Friday Times continue to obfuscate Shia genocide: https://lubpak.com/archives/74987

Deflecting the blame of the military establishment on to the civilian government is part of an established pattern of Najam Sethi. One wonders if the ISPR (public mouthpiece of Pakistan army) needed any permission before it attacked the Kerry Lugar Bill. Sethi conveniently forgets that it was the ISI that refused to follow an elected PM to offer cooperation to the Indian Government after the Mumbai attacks. Recently, the same ISI went against the same PM in the engineered the Memogate controversy implicating former ambassador to the USA, Mr. Husain Haqqani.

Sethi also made little mention of PML-N links with LeJ-ASWJ and gave a vague response when this topic came up.

Sethi’s links with the military establishment are much older than many of his current flatterers and promoters would like to remember. In  1996, he played a key role as a member of ISI-media team to discredit and  undermine elected government of Shaheed Benazir Bhutto. There are many reasons to criticize the current government. Unfortunately, Sethi’s past track record makes him a dubious critic. He was part of the caretaker setup that followed the overthrow of SMBB’s second government by turncoat politicians like Farooq Leghari in 1996.

Like LeJ’s Malik Ishaq, Najam Sethi also shared the dubious honour of flying around in a military helicopter while his Baloch comrades were being suppressed by the army in 1976. His treachery of the Baloch cause was exposed by none other than his former comrade Asad Rehman in an interview published a few years ago.  https://lubpak.com/archives/60154 Blaming the elected politicians, especially the PPP for the ills of the military establishment are part of Najam Sethi’s modus operandi. This also explains his most recent obfuscation of Shia Genocide. 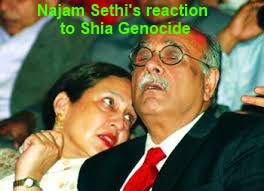