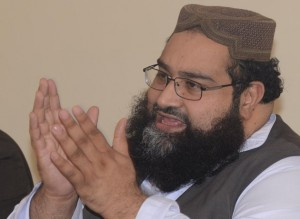 Ulema Deoband do not do General Takfeer of Shia Muslims

It took LUBP to sacrifice its entire editorial team and go out of the way to establish détente with Maulana Tahir Ashrafi. To his credit, the Maulana was forthcoming. The new editorial team led by Ali Taj had only one point to clarify: Does the Koran allow humans to declare a human being a kafir? If yes, what verses say so. If no, then why the Takrifi Deobandis supported by the Islamofascist Urdu media has been apostatizing the Shias and carrying out their uninterrupted genocide in Pakistan?

Certainly, there is no way the Shia apostatizing can be justified in any way unless the wolf comes crashing and says, “If not you, it must have been your father who swore at me!”
The Maulana in clear-cut terms has said that the Shias as a collectivity cannot be declared kafirs. He said only those Shias can be apostatized who insult the rightly guided caliphs of Islam. His complete statement is given below:

“Any Sunni or Shia doing takfeer (apostatizing) of Khulfa-e-Rashdin is considered Kafir by us (Deobandi ulema). We or any of our senior Ulema have never done general Takfeer of Shia Muslims. No eminent Deobandi scholar has ever demanded that Shia Muslims be banned from visiting Mecca and Medina. This in itself is a proof that we (Sunni Deobandis) consider Shia sect to be a part of Islam. We want to promote unity between Sunni Muslims and Shia Muslims.”
Despite its logical deficit, the Maulana’s statement was a good opening to build trust between the non-Takrifi Deobandis and the Shias.

However, according to an article in The Friday Times, Maulana Ashrafi has said that a Shia cannot be regarded as a Muslim by a Deobandi. The reader is urged to read the article to see what insinuations it makes about the Shias.
The article is available: http://www.thefridaytimes.com/beta3/tft/article.php?issue=20130208&page=9.

Here are a few points insinuated in the article:

1. The article presents the Maulana as a Shia hater who ‘warns’ the Shias instead of engaging them. It insinuates that it is the Shias who produce hate literature.
2. The article reminds readers that the Maulana “has been close to Malik Ishaq, the founder of the defunct Lashkar-e-Jhangvi and, but has dissociated with some of his views. Now, he talks about sectarian harmony.”
The point to be noted is that “Now” he talks about harmony; as if he has been forced into doing so. He is reluctant to talk to the Shias.

3. The article quotes from the Maulana: “If they [i.e., the Shias] can’t stop [abusing the Sunni religious figures], they should do it behind closed doors and not on the streets.”
The writer insinuates that the Shias are incorrigible because they cannot stop abusing Sunni religious personalities. Thus, by implications, they must be declared kafirs. Such misrepresentations endanger Shia lives.  In the past too, articles in TFT have presented Takfiri militants of LeJ-ASWJ as Sunni Muslims, which is both inaccurate and counter-productive.

This is not a sectarian war but target killing of Shias by militants who can be broadly termed as being Takfiri Deobandi — that is, those Deobandis who practice ‘takfir’ or apostasise, other Muslims. They include the Ahle Sunnat Wal Jamaat (ASWJ), Sipah-e-Sahaba (SSP), Lashkar-e-Jhangvi (LeJ), and the Taliban.
Takfiri Deobandis believe that Shias are non-Muslim (kafir). These divisive beliefs are based on fatwas (religious decrees) by leading Deobandi clerics including Darul Uloom Deoband (India) issued at various times that declare Shia Muslims to be Kafir.
It is important to change the public discourse on this issue in order to deny legitimacy to these forces. It is critical that responsible publications like TFT to understand this distinction and promote it.