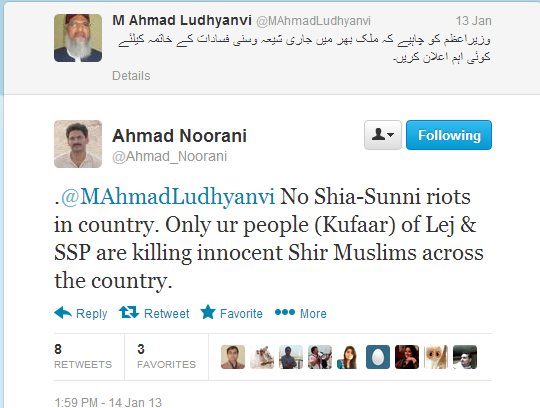 On Twitter, in response to a hypocritical and false-neutral tweet by Ahmed Ludhianvi Deobandi (head of banned terrorist group Sipah-e-Sahaba aka ASWJ-LeJ), Mr. Noorani clearly refuted the false Sunni-Shia sectarianism discourse, and stated that the issue of Shia genocide and murder of some Sunni Muslims had nothing to do with Sunni-Shia sectarian violence. Mr. Noorani stated that ASWJ-LeJ-SSP terrorists were responsible for Shia genocide in Pakistan and were also involved in murders of moderate Sunni Muslims. He said that any Takfiri group (i.e., one that declares other sect as infidel or kafir) is itself a Kafir, and is liable to harshest punishment.

Ahmad Noorani ‏@Ahmad_Noorani
No Shia-Sunni riots in country. Only Sipah-e-Sahaba (ASWJ) people (Kufaar) of Lej & SSP are killing innocent Shia Muslims across the country. I am not a Mufti, but follow just one-Principle — One who declare anyone else as “Kaafir” should be declared “Kaafir” & “Wajib-ul-Qatl” immediately. Whoever! I know one thing as a fact that LeJ & SSP killed thousands of Shia and even some Sunni Muslim in cold blood. And thus by this killing spree they have violated basic principles of Islam and humanity, and thus are neither Muslims nor humans. Are you asking for evidence against LeJ for its involvement in killing of Shia & some Sunni? One who term others is Kaafir by oneself. 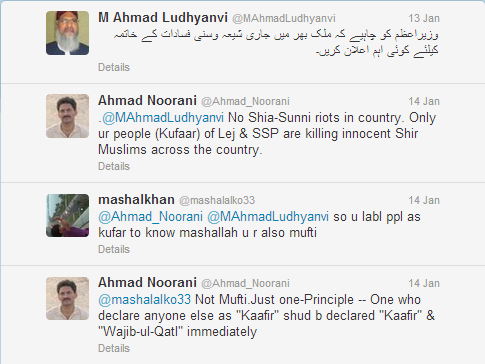 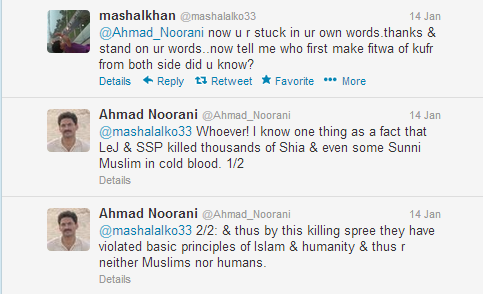 We notice that, increasingly, media persons and activists are realizing the gravity of full scale of Shia genocide taking place in Pakistan at the hands of banned Takfiri Deobandi outfits (ASWJ, LeJ etc). Recently, renowned journalist Sandanand Dhume too expressed his views in the aftermath of a suicide attack on a Shiite mosque in Hangu (KPK province) in which Deobandi militants killed at least 22 Shias and 3 Sunnis.

Sadanand Dhume ‏@dhume01
Even if you’ve long resisted the term #shiagenocide as overblown, at some point you’re forced to reconsider. #Pakistan http://www.bbc.co.uk/news/world-asia-21289738 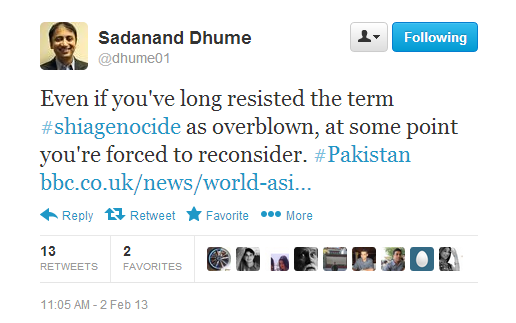 We commend Mr. Noorani and Mr. Sadanand Dhume on their bold stance on Shia genocide in Pakistan. Pakistan has lost at least 21,000 Shia Muslims, thousands of Sunnis, hundreds of Ahmadis, Christians etc at the hands of Takfiri terrorists. In order to preempt and avoid a Rwanda like situation, it is utmost important that international community and rights groups are made aware of the exact nature and extent of the threat facing forty million Shias of Pakistan.