In separate articles we have discussed how the killing of Shias in Pakistan fulfils the preconditions of genocide. Some people have argued that while it meets all the technical requirements of genocide, not ‘enough’ people have yet been killed to classify this as genocide. Though it can be debated whether or not over twenty thousand Shias killed in Pakistan suffice to qualify it as genocide, in my view acknowledging a genocide as such not only exposes the intent behind its perpetration but also plays a useful role to prevent or limit it. It is much better to do so now than wait for ‘enough’ Shias to be killed in Pakistan. It is also worth mentioning that the perpetrator of genocides and the government of the concerned country are the last to admit genocide. Till today, Turkey has continued to deny the genocide against Armenians. Even the Holocaust is still denied by skinheads, neo-Nazis, and other lunatics. In Nigeria, the genocide against Ibos is denied by neo-fascist followers of Awolowo and Gowon. Similarly, the Al-Bashir regime and their thugs are in constant denial of the genocide in Darfur. Thanks to the global presence of peace-loving Pakistanis and dawn of the information age, Shia Genocide in Pakistan is now beginning to be recognized and hopefully can be staved off.

Some of the images of Shia killings in Pakistan make me retch despite my steely stomach for such things. These are now aplenty, emerging from all over the country, from the severed heads and limbs of Shias killed in Parachinar to the Shias being taken off the buses and being shot point-blank after proper identification to a mother sitting by the side of coffins of her two sons for four days in cold, wet, and gloomy Quetta to seek protection for other mothers’ sons who still live. The execution style killing and bombing of Shias are now rife. We have certainly come to the newest low in Pakistan’s national culture of violence. The Pakistani psyche has been shaped by violence from the killings of Baluchs to atrocities in the Khyber Pakhtunkhwa Province to the bombing of Sufi shrines and their devotees to the relentless killing of Shias all over the country. 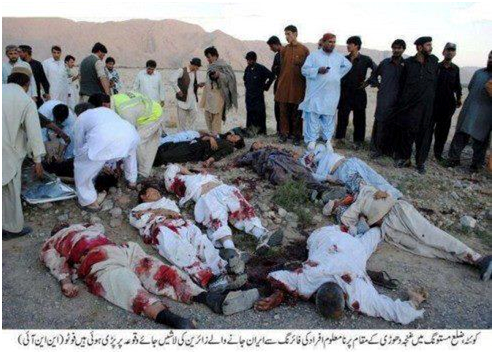 (Shias taken off a bus and shot dead after being identified)

The reason that it continues to happen is that no one is ever brought to account for each occasion of the violence perpetrated in Pakistan. We have lived in denial and in complicity, to the extent that Pakistanis have become increasingly numb to the nature of violence. Pakistan has become a highly traumatized nation and trauma has zombified Pakistanis. The greatest violence that now haunts Pakistan is the killing of Shias for the mere crime of being Shias. It is at the core of the Pakistan’s problems. Calling it genocide rattles the snake of apologists in the country who seek to obfuscate the identity or diminish the truth. In a society like Pakistan, many people are bound to

lose their independent judgement to the convenience of affiliation. It is sometimes extremely provocative to the victims of such violence to listen to these people defend atrocities.

The aim behind Shia Genocide is to secure Shia’s subjugation by all means necessary, including the use of selective and systematic annihilation. The extremist militants are so programmed by the hate narrative that they are incapable of keeping their differences civic and nonviolent. It is imperative to emphasize individual responsibility and for public accounting of genocide. Only those who support and defend the genocide should differ from this. Shia clergy is also not made of saints, has made mistakes, and has its own failings; but apostatizing to kill is outright inhuman. Every genocide has its justifying theory and we must not allow ourselves to be fooled by it. The Holocaust started because Jews were accused of plotting world domination. The Protocol of the Leading Elders of Zion detailed the alleged Jewish plot motivating Hitler to find a final solution to the Jewish question. The Tutsis were also accused of plotting to dominate Rwanda and Burundi when Tutsi soldiers shot and killed Juvénal Habyarimana and Cyprien Ntaryamira on 6 April 1994 triggering the genocide of Tutsis in Rwanda. Ibos were accused of plotting to dominate Nigeria, even though those women and children killed knew nothing about what Ibo soldiers were doing in their barracks. Bengalis were accused of treason though they were only asking for their rights after 24 years of bullying and dominance by their Western brothers.

The apologists only embolden the perpetrators and their backers as if they are doing nothing wrong. These shameless people stand by pontificating while women and children are being massacred. If they cannot see the connection embedded in the institutionalization of the culture of violence in Pakistan and Shias’ extermination, then too bad. The state and the religious parties’ response to atrocities against Shias is to banish them from consciousness. As if certain violations of the Islamic compact are too terrible to utter aloud and will rekindle old sectarian animosities. But horror and atrocity are impossible to bury or forget. To keep denying Shia Genocide is to bury our heads in sand, that indescribable state between intermittent and episodic trauma. Pakistan needs to heal – to stop its culture of violence and to prevent Shia Genocide within its borders. It is about time. To heal, Pakistan must come to terms with the roots of its culture of violence. Because perpetrators of atrocities against other Pakistanis are never brought to account, and are sometimes defended by powerful voices, Pakistan continues to breed and reproduce mindless violence and other forms of lawlessness. We must be civil enough to accept this fact because denying will not cure anything except that the atrocities will continue to grow worse. Denial is always worse than the consequences of the truth and is one of the main reasons we still cannot forge a nation after 65 years of the country’s creation. It is important that our children and future generations understand the persecution of some groups without allowing themselves to be blinded by religious or ethnic or sectarian affiliations. 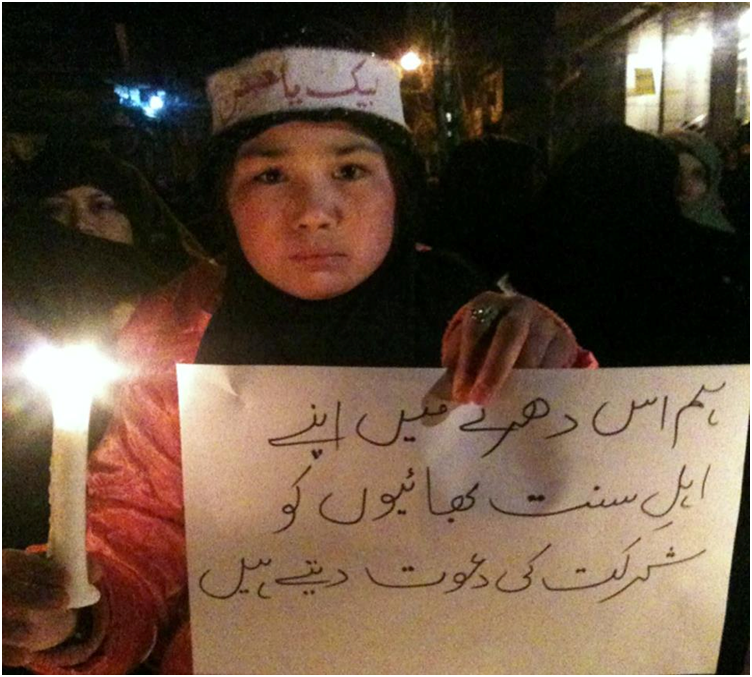 The acknowledgement of Shia Genocide –long a tabooed subject- will mark the beginning of wisdom and love of peace in Pakistan and the willingness of other Pakistanis to acknowledge and make amends for the atrocities against Shias will make healing possible.  Unless we learn to pronounce and stand by stark truth in matters such as Shia Genocide or Baluch Persecution, neither education nor any amount of democracy will ever erase many of our compatriots’ ethnic or sectarian instincts. Instead they will feel free to use them to deceive, persecute, and gain power. The only way to end the tyrannical impunity of those who commit such crimes is to bring them to account and punish them and the first step in that direction is to acknowledge and speak the truth. That is only how we can discourage our future generations from following into our footsteps. That is only how we can build a society with respect for rule of law and sanctity of life, where even the most fanatic would have a second thought about intentions to commit murder.