Home  »  Newspaper Articles   »   Why was #TahirulQadri launched? – by Cyril Almeida 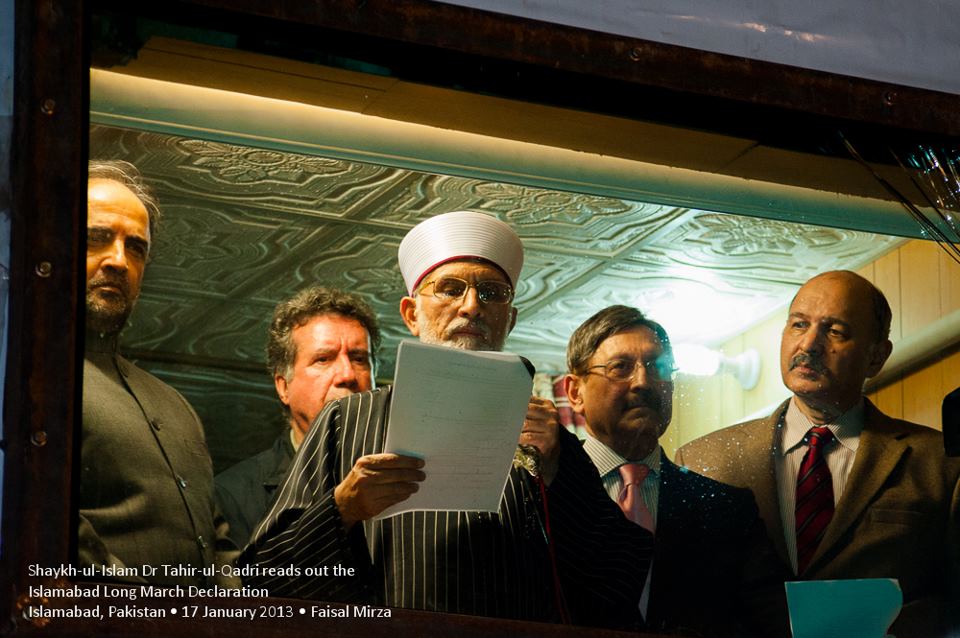 NOW that that’s over, let’s try and figure out what it meant.

One: activate the non-Wahabis/Deobandis. Battered and bruised by the Wahabi-Deobandi combine, the establishment is looking for a counter-narrative, the senior generals concerned that extremism is threatening to bubble over. (In this post, Jahangir Hafsi explains why some influential people in Pakistan including its media are saying terrible things about Tahir ul Qadri)

Numerically, the Barelvis and Shias are a bigger cohort and a safer bet, but they’re politically inactive or split. Meanwhile, the Deobandis have their mosque and madressah network to spread their tentacles in both state and society.

The Wahabi-Deobandi combine has fomented instability and now it’s time to try and rescue the army rank and file and society at large from the more dangerous elements of that combine.

Qadri’s march has put him on the map, the first step in the long road to politically mobilising the Barelvi community, historically riven by inter-pir rivalries.

Two: discredit the politicians. Suddenly, with general elections on the horizon, we’re being reminded that all politicians are, well, scum.

They lie, they cheat, they defraud, they avoid paying taxes, they’re tyrannical, they’re loathsome, they’re Not To Be Trusted, they’re the reason Pakistan is the mess it is today.

The people may elect them again, but they sure as hell will be under no illusion that the representatives they will elect could, at some level, be decent people or even adequate leaders if given the time and space.

Who wins when the politicians-are-scum trope is peddled so furiously? Someone’s got to run the place; do we really need to ask what’s the alternative?

Three: a partial cleaning-up. The focus on Articles 62/63, tweaked and energised by men in uniform when in-charge, is a cudgel to whack at least some politicians over the head with.

The worst-of-the-worst, the serial offenders, the detritus that clings barnacle-like to the creaking hull of the state — they exist in greater numbers than can be stomached.

If you can’t get all the politicians, at least pull the incorrigibly ugly out of the game. They do exist: politicians whose sole aim is to maximise personal profit and in doing so expose the public to maximum losses. (see Ayaz Amir’s column which explains why Pakistani elites and plutocrats are so afraid of Qadri.)

Left to their own devices, the politicians will never clean up their own house. A Qadri-like jolt to the system could force their hand though, winning some concessions that more normal circumstances would never bring.

Four: an apolitical caretaker set-up. The PPP and PML-N’s choice for interim prime minister will necessarily be someone who favours politics, politicians and the democratic process.

While the caretaker government’s mandate is limited and term short, it will still be the government and the prime minister will still have a very large megaphone — meaning, they can push back.

Push back against whom? In Fata, KP and Balochistan, the army will have some role come election time — a reality guaranteed by the presence of troops in those areas.

And that’s before a decision is taken on whether to try and shape overall results and mould the incoming assemblies to serve certain purposes.

Even if the army chooses to remain passive during the election cycle, it is still vulnerable to a politically selected caretaker set-up: what if the interim prime minister, and the team he selects, is avowedly against the army’s political role? The army could find itself clubbed over the head by crusading caretakers with nothing to lose. So better an apolitical caretaker set-up — even better, an anti-political one — just in case.

So much for the soft option. Surely, though, the grand spectacle that is Qadri was not launched just to achieve some second-tier effects.

Second-tier effects are desirable but they are only a consolation prize.

The big prize remains the same: delay the elections indefinitely; bring in a team of competents; and effect change on two fronts.

First, stabilise the economy and implement a series of well-known and much-needed reforms. Second, counter the strands of extremism and terrorism that pose a direct threat to the state’s interests as articulated by the army.

They’ve failed, right? The big prize is out of grasp now, isn’t it?

The assemblies have just weeks to go before their terms are up and general elections are just a handful of months away.

Even in the land where anything is possible, some things are more possible than others, right?

Crises in Pakistan have a gestation period. Qadri was able to circumvent the rule of thumb of three-to-six months before a crisis becomes full-blown with the massive amounts of money available to him.

He could buy his way to insta-crisis status in a way few others can. As for those few, unknown, others, they have a problem: now that Qadri’s done it, another outsider will have to find another novel way to break in. You can’t just replicate crises.

But put your ear to the ground and the PPP and the PML-N remain unsettled. They think there’s more to come yet.

More to come, but from where exactly?
Three names pop up: MQM, PML-Q, PTI.

All three are already in the game, all have crisis-generating abilities, and all are a bit like Lance Armstrong until earlier this week: you know which camp they belong to, but have to suffer their denials in the absence of public proof.

Can the PPP resist and the PML-N continue to stand tall? Possibly.

But their reluctance to go for elections immediately is hurting them, because more time in power means more time for opponents to plot their downfall.

Locked and reloaded, there’s more to come yet.
Though Pakistan being Pakistan, it’s difficult to guess when and from where exactly.