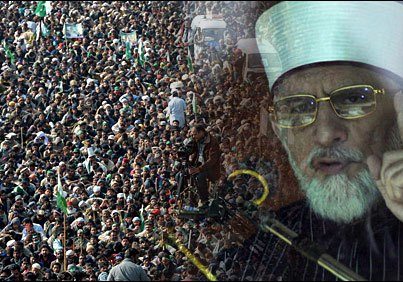 “The way I see, Tahir-ul-Qadri was able to make a tiny dent into Saudi-sponsored Deobandi-Wahhabi hegemony in Pakistan. Full marks to him on that!” (A.N.)

Related post: Why are they saying terrible things about Tahir ul Qadri?

So it was not to be. Not because the people of the city were cruel – shehr ke log zaalim na thay – but because they were just indifferent. They might have paid heed to the words but they were not sufficiently moved to turn the words into action.

And so while the long march was impressive the numbers, for the most part, remained static. It was a huge crowd and the Allama’s followers stayed put despite the inclement weather. But Jinnah Avenue did not turn into Tahrir Square. And so the dream, heady and powerful while it lasted, had to come to an end.

Mistake not the writing on the wall. This country is not destined for real change. Our stars are not aligned in that direction. The status quo is too entrenched and those who feed off it will frown at any maverick attempt to disturb it.

We will keep talking of change and even of revolution – both words coming easily to Pakistani lips – but the first real opportunity for effecting change, the storming of the citadels of decrepit authority, that came our way we have just missed, and another such opportunity is not going to come in our lifetime – at least not in the lifetime of my generation, the first post-Partition generation.

Pakistani spring? We will have to make do with the Faiz poem, ‘Bahar Aai’ – spring cometh – and that’s about it. And we will weep into our cups and bewail our lost circumstances. And we will refill our cups and look into the far distance and sing some more poetry.

All at the altar of democracy. An inspiring moment, democracy’s champions striking their breasts for they have just prevented democracy from being derailed. And I look at the mugshots of the democracy champions gathered in Lahore – hardened clerics and lay redeemers – and my heart sinks. Haven’t we grown up with the legend that in democracy lies our salvation? But I look at the motley champions and, try as I might, I cannot work myself into the requisite state of emotion.

Not even when I look at another picture of my friends Asma Jahangir and IA Rehman lighting candles in a vigil for democracy outside the Punjab assembly – an institution whose regular proceedings invariably make me yearn for some kind of Napoleonic authoritarianism. But I am moved: what heroic expressions my two friends are wearing.

And what was the conspiracy against democracy whose devious web Allama Tahirul Qadri was weaving? Good heavens…details and minutiae apart, he was proposing a purge of the plutocrats, a decapitation of the upper bourgeoisie – on grounds of loan defaults and loan write-offs. Dangerous Bolshevism: how could anyone, least of all democracy’s champions, allow such ideas to circulate?

So they went hammer and tongs at the professor and his weird notions, ridiculed his cap and his dual nationality, wondered why he was in a bullet-proof vehicle when his supporters lay out in the cold and thundered that ‘hidden hands’ would not be allowed to derail democracy.

The nation deserves applause. It has not been able to prevent its trains from being derailed – most of them are in the scrapyard – but it has kept democracy on the rails, in the safe keeping of the plutocrats and the upper bourgeoisie. And the Pakistani masses, the majority of the unwashed and the supper-less, can rejoice that their great cause has once again triumphed.

India’s foremost lavatories are its railway lines. The sight of people squatting in the mornings as the trains thunder past…this is Indian democracy seen at its best. And just as the mass of the Indian people has been redeemed by the working of democracy and the holding of regular elections, the Pakistani masses too will be redeemed by the historic saving of democracy that we have just witnessed.

Mark the professor’s cheek, his effrontery – talking of liberal Islam, the liberation of women, the mainstreaming of minorities and showing a visible allergy to the word ‘maulana’. And the greatest sin of all – postulating the tenets of something akin to a people’s democracy. How could anyone in his right senses swallow this?

A people’s democracy? Egalitarianism? What nonsense. Pakistan was created for the triumph of the upper classes, and its democracy fashioned to keep this arrangement in place. And anyone questioning the wisdom of this deserves what his holiness the professor is getting.

Ah, the siren calls of democratic continuity. Any Odysseus would happily seek shipwreck on these slippery shores. Democratic continuity in India has led to the emergence of a huge middle class – a positive development – but also to more power to the Tatas and the Ambanis. And India’s poor have been kept firmly in their place. Wherever shopping mall democracy is practiced trust it to ensure this outcome. Have not one but fifteen more elections in Pakistan and no fear, the power of the plutocracy will grow and the great awam, as always, will remain firmly in their place.

As for the famous hidden hand, where on earth did it disappear? An entire army of cynics held the long march to be a choreographed affair. It might well have been and Allah knoweth best, but if the hidden hand was behind all this and if it was looking for excuses to make its magic felt, what better excuse than this holdout on Jinnah Avenue?

So why no magic and no fireworks? Does this mean there was no choreography? Trust the cynics not to be amused for their whole Qadri theory rested on the supposed machinations of the hidden hand.

What should Qadri do now? His TV addresses, whether one agrees with his prescriptions or not, have been electrifying affairs. What an orator – the most powerful across the nation today. His demands will not be met and he has not the power to compel their acceptance. Let him look for no face-saving formula. Let him take matters into his own hands and order his own retreat from Moscow.

Of all the operations of war, an orderly retreat is the most difficult. The fortitude of his followers camped out in the open has been extraordinary. His dignity or standing will be enhanced not compromised or diminished by a voluntary retreat. Breaking off an unequal struggle is sometimes the greatest test of generalship. Let him rise to the occasion.

Hidden hands be damned. Not since Bhutto challenged the status quo in 1970 has anyone come as close to doing the same again as the professor. See how the political class took fright and its leading lights, forgetting their other differences, closed ranks to oppose him…maulvis and plutocrats together.

Not to prevent the derailing of democracy, for it wasn’t being derailed, but to protect and preserve the ramparts of the status quo. The plutocrats had their own reasons, suspecting that Qadri was being used to torpedo their chances in the coming elections. The maulanas of the religious parties just hated his guts for he was stealing their thunder and pointing the way to a path they never could tread.

The memory of this event will remain, of something that could have happened. This is no mean legacy. Meanwhile it would help if the words change and revolution are banished from the Pakistani dictionary and the use of the phrase cleaning the Augean stables is made a penal offence.

But as I write these lines and look at the TV screen there is a crisis building up. The professor has given a 3 pm deadline for talks and preparations are being made for a march towards Parliament House. Let’s just hope nothing untoward happens. I thought Prof Qadri would not be able to force the issue but he seems bent on doing precisely that. Where this may lead we do not know.

Tailpiece: Today is the death anniversary – 66th – of Kundan Lal Saigal. Let the evening be dedicated to his immortal memory. “Fill high the cup with Samian wine”…and for listening choose the song that comes nearest to your heart.