My view on the past three days -by Asif Zaidi 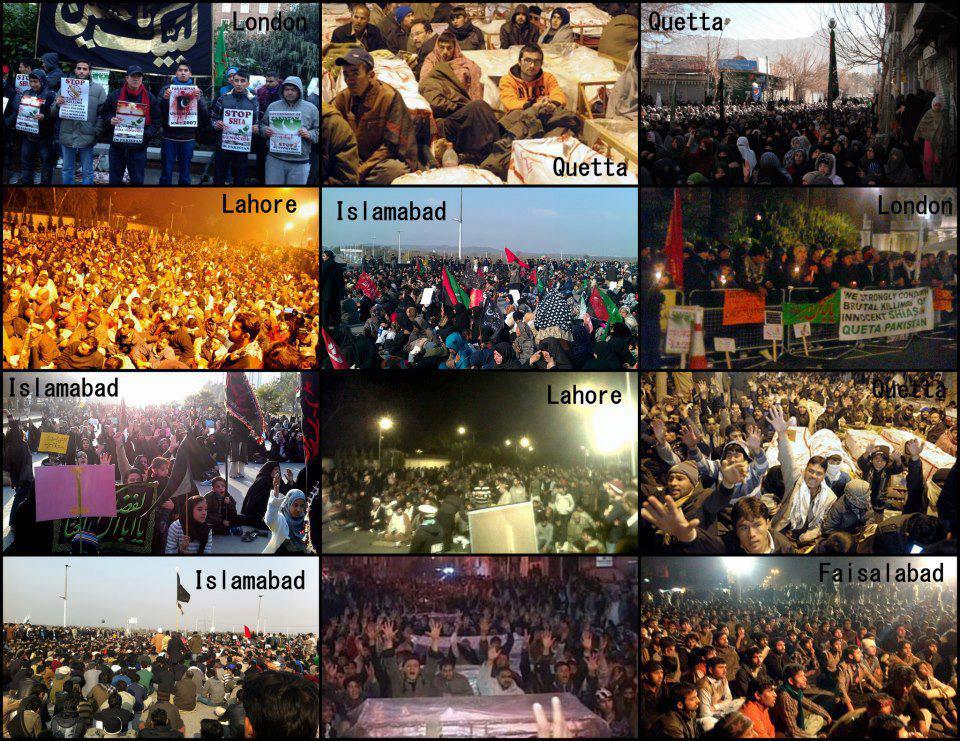 By all means the last three days were monumental in the recent history of Pakistan’s Shias and all of us must sit back and think what we gained and what we floundered during this historic moment and also, more importantly, what we can learn from it. Here is my view. Please feel free to differ, for it is in difference that we learn. Agreement is too boring.

There have been some monumental positives that we can glean from the events during the past three days.

–          The community was able to show an unprecedented capacity to act in tandem and with an admirable unity.

–          Our stand garnered significant political capital in getting many politicians to come out and speak the truth for the first ever time.

–          Internationally also, we were able to rouse spontaneous response resulting in vigils and protests round the world. We have been able to create an international community of Pakistanis (including many Sunni brethren) who are now attuned to the issue of Shia Genocide in Pakistan and can be mobilized to make an expression round the world.

–          The verve and energy that the community displayed also remains unmatched in the recent history.

–          The biggest positive for me lies in the engagement and support that we were able to harness from other Muslim brethren in Pakistan. The understanding most moderate people showed was remarkable and displays increasing realization that the fight against extremism is not just important for Shias, Ahmedis, Christians or Hindus but it is vital for every Pakistani with a sense of balance.

In the end we bargained a historic opportunity for much less than its market value, which had appreciated exponentially since we began three days ago. Let’s see what we got in bargain.

So what we will realistically get is a temporary reprieve in Baluchistan. Perhaps LeJ will be told to lie low in the province for a couple of months.

Note some of the examples from the countless instances of how a movement transforms itself.

Imagine if Tunisians had in the end, after all that happened, traded for compensation to the whole family or even entire city of the guy who had self-immolated?

The initial demand in Al Tahrir Square in Egypt was for some democratic reforms but it led to a complete change in the political order and system.

Pakistan’s demand was not non-negotiable until after the failure of cabinet Mission.

All this to say that, sometimes success surpasses your expectations and you have to know to handle it and readjust the sails. In such cases a movement’s objectives and gains can transcend well above its initial goals. These demands were set at the beginning. The crescendo that had built up from Ottawa to Sydney and within Pakistan was worth a lot more. A historic moment laid waste.

Don’t’ get me wrong. Hazaras showed amazing pluck. But the deal betrays their women who had sat under open sky in the frost with traumatized spirits, broken hearts, and by the side of their dead loved ones. .

An important question is, Hazaras could not have succeeded without the help from all Pakistan’s Shias and the Sunnis who sided with them. Should they not have asked others who had by then become large stakeholders?

To say that they had to bury their dead is outright senseless. The crescendo had now reached a point where burying the dead would not have mattered. They could have buried their dead and the protests would have continued unabated from Karachi to Parachinar and Baltistan and from Ottawa to Sydney. Many other cities, for instance Baku and Paris, were in contact with us to start. By today evening we could have spread it to all major capitals of the world.

So many of our Sunni brethren were joining. By tomorrow the rhythm would have reached a deafening cadence.

In the end it all boiled down to two gentlemen showing up and almost reading the riot act in disdain. One of them (Kaira) even threatened over 86 of our young men’s coffins that you cannot discuss with a PM. Is this how you talk when you turn up for condolence at a funeral?

For me a historical moment has been floundered and I am desperate to be proved wrong.

A lack of strong and sensible leadership stuck out like a sore thumb.

Shia Genocide seems set to continue notwithstanding a temporary relief in Quetta.

We will continue to fight against the Shia Genocide in Pakistan. (Used to fight for Ahmedis and now for Shias. God knows who it can be next in Pakistan).

However, in this episode, I have realized that our expectations from our leaders have been totally knocked down. Therefore, we have to stand up and help ourselves. Thus, I have decided that I will consistently work for the wellbeing of my homeland and its oppressed minorities. I am sure my minimal contribution for my land and people can make some difference in the time to come.

Hence, all of us, in his or her own capacity, must contribute something positive which will Inshallah result accordingly. Our efforts may be temporarily negligible, but they will result into a huge success one day. Each one of us counts.