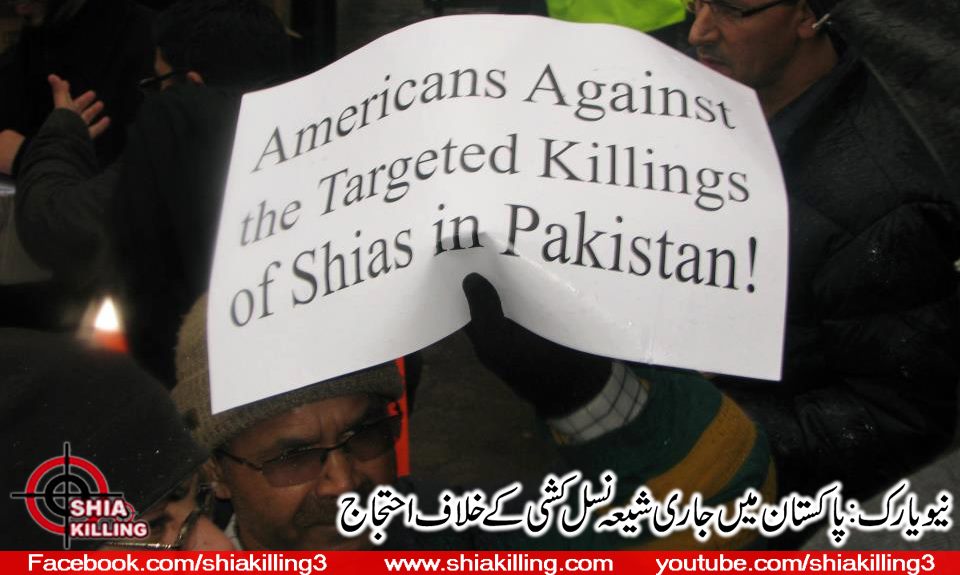 “When the soul lies down in that grass, the world is too full to talk about.”
― Rumi

Once again in Quetta, having killed 81 people, a massacre by ASWJ-LeJ operatives that mudered media, police and rescue workers as double bombs exploded; again showing the callous disregard for both targets and non-targets, when Takfiri Deobandis are out to murder who? Absent in most press reports are the intended victims: Shias. The Rehmattullah Chowk on Alamdar Road explosion, and second Airport area blast brought the dead and injured to 69 and 120 respectively. This was a Shia-target operation by Takfiri Deobandis. Silence, so far, has met this and most all global Salafist terrorism from the Islamic world. There are those who speak out, but not in sufficient numbers to make a  difference.

These explosions on Alamdar Road were clearly meant for innocent Shias, with no concern for others in collateral damage –  subsequent bombs targeted Shias and anyone else in the way. On Twitter the ASWJ-LeJ have not only claimed responsibility, they are boastful about their part. If the Sunni community think that silence is appropriate, “because, after all, aren’t Shias Kafirs?” I would ask them to remember that moderate Sunnis are also being killed, as are Hindus, Sufis, Ahmadis, and Christians.

It is easy to default to doing nothing. To be of the unwitting consensual; to be silent; or, to report  and do nothing. But silence encourages Shia Genocide in Pakistan. Pakistan authorities exist to protect its people. That is the purpose of government together with authorities of law and order. But, even laws don’t guarantee protection unless “the people” are willing to step up and make a change.

While some individuals within Pakistan’s civil society seem to have finally awoken from their self-imposed stupor on the ongoing Shia Genocide, a cautious trepidation should remain when one assesses the trends: Oscar winner Sharmeen Obaid Chinoy was still denying Shia Genocide only days ago https://lubpak.com/archives/235017 . So was prominent TV anchor, incredibly, Nasim Zehra herself a Shia https://lubpak.com/archives/236329 .

Instead of informing the global community of the relentless Shia Genocide, Pakistan’s well educated urban elites preferred to misrepresent purposeful elimination of Shias today in dusty historical terms, “sectarian” and “ethnic violence”.  In this way, they deliberately obscure both the victim (Shias) as well as the perpetrators (Takfiri Deobandi militants who belong to ASWJ-LeJ and the Taliban) by confusing past history with current, and newly documented facts on the ground.

While the Shia Killing blogs, Twitters, LUBP and World Shia Forum were vehemently articulating their message in desperation, Pakistan’s civil society were more concerned with selective condemnation of the murder of one influential young man by another influential young man in the posh suburbs of Karachi.  The daily killings and massacres of Shias all over Pakistan did not merit their attention aside from token and vague references on social media.  As an American, it concerns me that some of Pakistan’s celebrity activists are conducting their selective activism based on self-interest, from the proceeds of our tax dollars which have been granted to their various NGOs.

Genocide and elimination of oppressed minorities are often not noticed  in its initial stages. Government silence on such catastrophes range from complicit to simple negligence. In the United States, pre-civil war  and post-Reconstruction era, the U.S. government failed to protect its African-American population. Despite the well-intentioned congress that passed the 14th Amendment granting citizenship for blacks, and equal protection clause, this same government left the African-Americans on their own in regions where they were murdered by unlawful vigilantes, not unlike the Pakistani Shias today.

Pakistan is a young country compared to the U.S. Therefore, there are lessons we learned in our long U.S. history that contain true cautionary tales that can be warnings to Pakistanis- in particular, Shia minorities. Puritanism and persecution by Puritanical Christian Calvinism were as self-righteous and misguided by draconian, religious intolerance as the Taliban today. It condemned even unbaptized infants to Hell. The Salem witch burnings of radical Christians are in our history. No one dared speak out or be targeted, and so it went on all too long.

So, for Pakistanis, it is instructive to remember also that progress on paper does not always reflect realities on the ground. The subsequent U.S. congress 15th Amendment clause prohibiting the denial of voting (suffrage) based on race, color, or previous condition of servitude was progress. But, in practice, this changed little when an enemy (white vindictive Southerners, in our case; Takfiri Deobandis, in your case) remains undeterred. The U.S. government was still unable to protect its African-Americans, though these freed slaves, were proud of voting privileges and newly established citizens. This era began what I call the “hanging tree” era, and was historically called the “Jim Crow” period, largely unreported at the time. This is an egregious blot on our U.S. history. Everything is not an analogy, but it is reminiscent of the Shia extermination that has been “unreported” from any factual basis by the mainstream media.

Shias are a minority that have been oppressed since the 7th Century, and now suffer the termination “solution” the familiar term used by Nazis against the Jews. There is something to be learned by comparisons; the “solution” for the historical American Indian, for example, was subtle removal and government sanctioned killing, carried out by elimination over time. The U.S. story of the Native American, if not genocide, what would we call it? U.S. Native American population prior to European contact was greater than 12 million, and four centuries later, the population approximately 237,000 (close to 95% eliminated). This is an American tragedy we regret, in books that make one weep, Dee Brown’s, “Bury My Heart at Wounded Knee.” So, besides the Jewish Holocaust, Rwanda, Darfur, history shows the us, the U.S., and many countries out of the scope of this essay, that indeed, we sometimes fail to speak out loud enough, or at all, at the cost of genocidal numbers. In India (the recent fatal gang-rape of an innocent woman) and Saudi Arabia (beating of unescorted women), including China infanticide of female children; many Muslim (“Honor killings”) and African countries women die of female circumcision; governments and authorities fail to protect their women, or minority ethnic groups. Silence can be “golden,” and “Silence” can contribute to bloodshed; Silence can “kill.”

Sometimes I ask myself, “Do I have the courage to do the right thing when it matters most?” And that answer, I’m afraid, is silence.”
― Jarod Kintz, This Book is Not for Sale

The Shia genocide can no longer be attributed to lack of information. The #ShiaGenocide twitters, the Shia Genocide blogs, and LUBP, including even my early report on this: December 2011:

and, again, my widely publicized 10 April, 2012 essay published in LUBP, picked up by other publications globally: https://lubpak.com/archives/75775

This is only a miniscule example of the many articles addressing Shia Genocide, on LUBP, in Dawn, in Blogs, and Twitter; Including marches in Pakistan with Sunni and Shia solidarity; in both the U.S. and Pakistan. Therefore, information has been plentiful. Action has not been the result; Silence has been the reaction!

“At times to be silent is to lie. You will win because you have enough brute force. But you will not convince. For to convince you need to persuade. And in order to persuade you would need what you lack: Reason and Right”
― Miguel de Unamuno

The mainstream media, also apparently in fear of Takfiri Deobandi Jihadists, remain silent, or obfuscate the issue as “sectarian conflicts,” or Hazara historical problems. In doing so, give themselves credit for speaking out, but, fail to address the real on-going genocide that mounts now to 20,000 Shia dead since mid-1980s..

“The cruelest lies are often told in silence.”
― Robert Louis Stevenson, Virginibus Puerisque and Other Papers

Pitting Sunni against Shia, historically, affords a convenient spinning point for the media to emphasize sectarian over genocidal homicide and affords a point of departure for manufacturing animosity against Shia in general. It sets up the platform for brain-washing of the lower-income, uneducated and Madrassa orphans, to demonize Shia, and waste their lives and Shia lives, by suicide bomb. Enter the Takfiris! Those that cast all those that are different from their own beliefs, as Kafirs. This is not based on the Quran, but rather Wahabbi/Salafist interpretations. These self-appointed gatekeepers of the faith group all others as Kafirs. The genocidal intentions start there. Salafi-Takfiris, unlike the orthodox method of establishing takfir through the reasonable processes of the law, declare apostasy and personal Jihad against whom they will- in this case: Shia; among those lesser involved: Hindus, Sufis, Ahmadis, and Christains are also at risk. These are the Takfiri Deobandi of which we speak. They are paradoxically enemies of the state, and yet, state-sponsored. They are linked with and supported by every Salafist group from the Haqqani Network to al Qaeda.

The elected Pakistan state government has become unwittingly apologists for the Jihadists, through their silence of the duplicity of the Pak Army. Perhaps this is out of fear of the military, giving lip-service only to the loss of Shia lives; the only group with sufficient resources at this point in Pakistan to stop such slaughter is one of the region’s largest, wealthiest, and well-armed military – your own Pakistani Army. But, its support for Salafist jihadists protected within the Strategic Depth program, which awaits American troop pull-out in Afghanistan, and dreams of forays into Kashmir, and Mumbai-type bombings for the future, and remains silent on Shia-genocide. Therefore, all government officials now give only passing reference to Shias being massacred. The Supreme Court assists by releasing known terrorists; No help is on the way. No plan has emerged. Silence from the masses continues.

Where are the Muslim scholars that could speak out against Shia genocide? Some have, to their credit. But, en masse? No. Where are the Muslims with influence that could speak out against Shia genocide? (Though I acknowledge those Sunnis who join in voicing concern, still, the majority remain silent.) The Sunni mufti, qadi, faqih, or muhaddith? Or, the village mullahs and imams that might speak out?  Is there in fact, an Ulema? The Ummah, a Jinnah might have expected to emerge; If there is an Ummah, they are largely silent, and therefore part of the problem. Moderate Sunnis, while not specifically the problem, join in the culpability by silence. (Again, in deference, my apologies to those brave Sunnis and Sufis that speak up):

Does not everything depend on our interpretation of the silence around us?”
― Lawrence Durrell, Justine

If silence continues, the only other recourse are the Shia and Sunni coming together with secular population to stop the slaughter and insist the government bring Takfiri Deobandis and its Jihadist supporters to justice. This is possible.