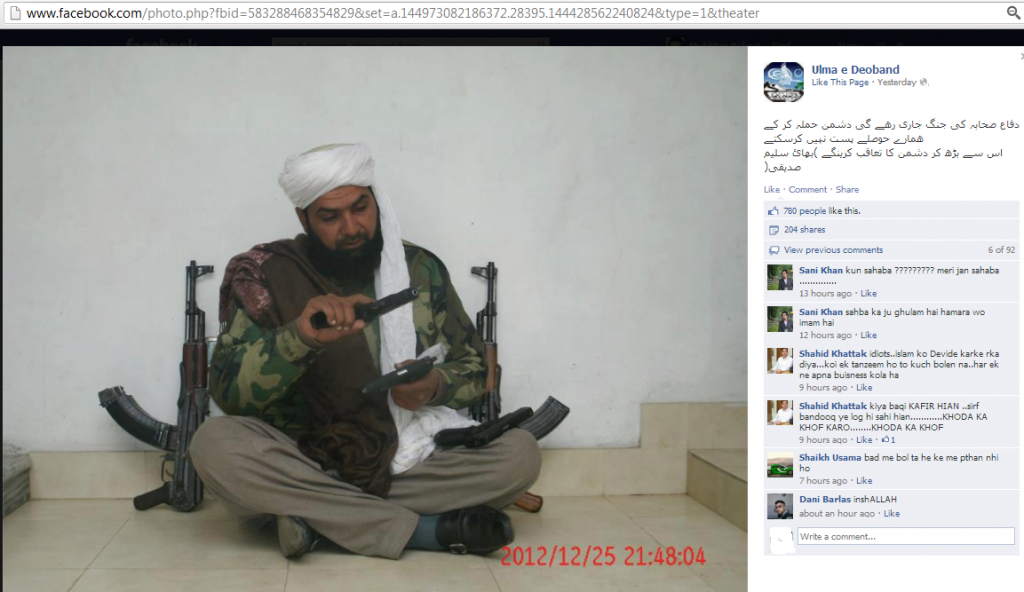 Karachi: As the city descends into fear amid a renewed wave of killings, the police authorities see one or more organised groups behind what was earlier being called ‘tit-for-tat Deobandi vs Shia sectarian attacks’ as forensic investigations into nearly 90 cases found that same weapons had been used in targeting people from different sects and political parties, it emerged on Thursday. A top police official confirmed to Dawn that under forensic findings it seemed ‘crystal clear’ that the recent wave of killings had nothing to do with Sunni-Shia (or more precisely Deobandi-Shia) sectarian rivalry rather it was an attempt to ‘destabilise the city peace’ to achieve ‘certain targets’. More than 300 Shia Muslims and up to twenty Deobandi affiliates of the Sipah Sahaba have been killed in Karachi alone in 2012.

However, the forensic examination of weapons used in the murder of Shia Muslims and some Deobandi clerics suggests that same weapons were using in attacks on Shias and moderate Deobandi clerics. This confirms the lang asserted belief that Takfiri Deobandi militants of Sipah Sahaba (operating as Ahle Sunnat Wal Jamaat ASWJ or Lashkar-e-Jhangvi LeJ) are not only killing Shias, Sunni Barelvis and Ahamdis, they are also killing moderate Deobandi clerics opposed to their violent agenda. Some of the attacks on Deobandi leaders of Sipah Sahaba are also attributed to the intra-Sipah Sahaba rivalry between Malik Ishaq Deobandi group and Ahmed Ludhianvi Deobandi group.

The recent revelation confirms that Takfiri Deobandi militants of Sipah Sahaba Taliban (SST) are target killing both Shia and Sunni Muslims in order to manufacture and incite Sunni-Shia sectarian violence in Pakistan. Only a few weeks ago, a Deobandi militant of Sipah Sahaba was caught red handed in New Karachi after he killed a prayer leader in an Ahle Hadith (Salafist) mosque. https://lubpak.com/archives/232179 A few months ago, Police in Peshawar revealed a printing press in which Sipah Sahaba Deobandis were publishing blasphemous books against the Sahaba (Companions of the Prophet) attributed to Shia clerics. https://lubpak.com/archives/228472 In the past, Sipah Sahaba Deobandi militants have killed Sunni Deobandi and Sunni Barelvi clerics such as Maulana Hasan Jan Deobandi, Maulana Nizamuddin Shamzai Deobandi, Maulana Sarfraz Naeemi, Maulana Saleem Qadri, Maulana Abbas Qadri, Maulana Akram Razvi etc.

Should we not condemn Sunni genocide taking place in Pakistan? http://shar.es/hBpLs
https://lubpak.com/archives/74672

According to informed sources, Pakistan army, ISI in particular, is perturbed by this revelation by the Karachi Police and is currently pressurizing them to deflect the attention from Sipah Sahaba (ASWJ) to foreign conspiracies (USA, Israel, India etc).

According to Sindh IG Fayyaz Ahmed Leghari told Dawn. “Killers are neither Sunni or Shia. It’s a third force (Takfiri Deobandis). The current targeting of Shias and also some attacks on Deobandis have nothing to do with Sunni-Shia sectarian differences. If they were the cause, you would have been witnessing violence in every street of the country.”

Asked about reasons for his confidence about the ‘third force’ (i.e., Takfiri Deobandi enemies of both Sunni and Shia) involved in the killings, he based his conclusion on findings of forensic investigations into a number of recent incidents that had earlier been described as sectarian killings.

“For instance, we have found that the weapon used in one targeted attack was also used in another,” said IG Leghari.

He explained that on Nov 29, a young couple, Dr. Iqbal Hussain and Dr. Dilshad Kaneez Fatima who were employees of the Karachi Institute of Radiotherapy and Nuclear Medicine (KIRAN), was gunned down near Safoora Goth and the following day another man, Nazar Abbas, was killed on Shaheed-i-Millat Road whose 12-year-old daughter, Mehzar Zehra, was wounded in the attack. The police investigators and the media then suspected sectarian motives for both attacks as all the victims belonged to the Shia sect, he said.

However, he added, the Dec 3 killing of a seminary teacher off Abul Hasan Ispahani Road and forensic analysis of spent bullet casings one after another incident told a different story. “On Dec 3, Maulana Mufti Mohammad Ismail Deobandi of Madressah Ahsan-ul-Uloom was shot dead, off Abul Hasan Ispahani Road. Interestingly, the forensic examination in all these cases suggested that the same weapon was used in all three shootings,” said IG Leghari, reiterating that it was for this reason that the police believed “it’s not the sectarian violence or shooting on an ideological basis”.

Karachi has experienced a high number of anti-Shia target killing in 2012. Many people belonging to the Shia sect — with a significant number of them from same families — lost their lives to the menace. Similarly, a relatively lesser number of men belonging to the Sunni Deobandi sect, including seminary students and teachers, were killed in incidents of firing in different parts of the city.

While no serious effort from government quarters was witnessed to track the attackers and expose their motive, the Sindh police forensic division has made some progress on these lines. “We have digital images of over 7,000 empties [spent bullet casings],” said Additional IG forensic division Muneer Sheikh. He said: “After a forensic analysis so far in some 90 cases this year we have found weapons of different calibers used in the multiple killings. Modern technology is being used for the analysis of every spent bullet casing according to global standards of forensic investigations,” he added.

There is a great possibility that many of the weapons used by Deobandi militants of Sipah Sahaba were given to them as a part of Pakistan army’s Jihadist training for cross-border operations in Kashmir and Afghanistan. In that case, relevant quarters in the ISI may be rightly worried by the current revelation and may try to suppress it. 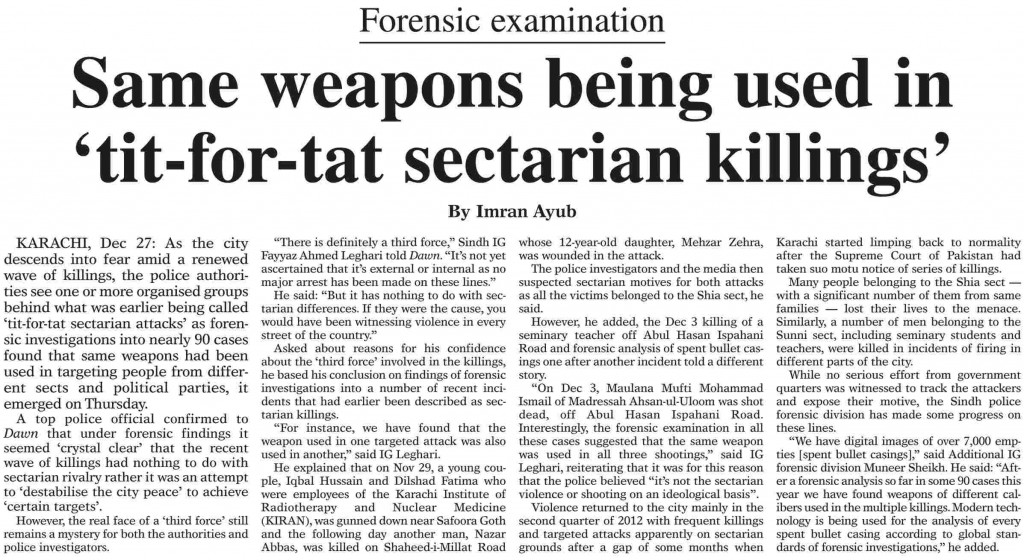 Video: Takfiri Deobandi Enemies of Sunni and Shia are behind Terrorism