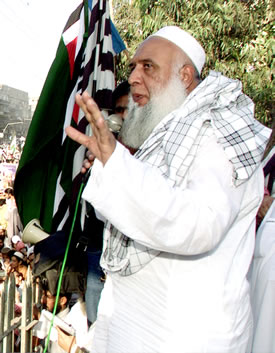 In September 2004, Pakistan announced that paramilitary police had killed Amjad Farooqi, a Takfiri Deobandi militant of Sipah Sahaba Taliban (SST), wanted in connection with the kidnapping and murder of Wall Street Journal reporter Daniel Pearl in 2002, as well as for two assassination attempts against General Musharraf in December 2003. Pakistani and international media conveniently ignored the fact that Amjad Farooqi Deobandi was last seen in Karachi’s Quaidabad suburb in the Tariq Hotel, on the same day (30 May 2004) that Mufti Nizamuddin Shamzai, a leading Sunni Deobandi cleric and head of Islamic religious school Jamia Binoria, was assassinated (Source). Amjad Farooqi Deobandi was a member of the Lashkar-i-Jhangvi (aka Sipah Sahaba Taliban), a banned group of sectarian assassins who target Shia, Sunni Barelvi, Ahmadi and Christian communities. Farooqi had been tasked by none else than a leading (Takfiri) Deobandi cleric to assassinate Mufti Shamzai.

Why did Takfiri Deobandi militants of Sipah Sahaba Taliban kill a senior Deobandi cleric? The following are some interconnected answers:

1. Despite his close association with the Taliban and the ISI, Mufti Nizamuddin Shamzai had become growingly unhappy about indiscriminate violence and acts of terrorism by Takfiri Deobandi militants. He had issued a number of fatwas against suicide bombing and increasing acts of violence by the Taliban, Sipah Sahaba and Al Qaeda in Pakistan and Saudi Arabia.

2. Mufti Nizamuddin Shamzai was becoming increasingly vocal against Nasibis (enemies of Hazrat Ali r.a. and Ahl-e-Bait r.a.) present in Takfiri Deobandis and Takfiri Salafists. He wrote books and gave a number of speeches in which he condemned and rejected Nasibi Salafist clerics including Ibn Taymiyya and Ibne Khaldun.

3. By murdering Mufti Shamzai, Takfiri Deobandis of Sipah Sahaba not only stopped the way of his fatwas against Taliban and Sipah Sahaba’s terrorism and suicide bombing, they also tried ignite Sunni Shia sectarian violence by blaming Shia Muslims for the murder of Mufti Shamzai. It is the same strategy which they also used in the case of Maulana Hasan Jan Deobandi’s murder in Peshawar in 2007. In the aftermath of Shmazai’s murder, Takfiri Deobandis of Sipah Sahaba killed at least 28 Shia Muslims in Karachi’s Ali Raza mosque the very next day. It must be noted that many of Shamzai’s colleagues in the Binori madrassa refrained from blaming Shia extremists for the assassination and condemned attempts to project it as the outcome of the growing Shia-Sunni divide in Pakistan in general and in Karachi in particular (Source).

In Pakistan’s religious hierarchy, Mufti Shamzai occupied the second position after Mufti Rafiuddin Usmani Deobandi, who is the chief Mufti of Pakistan and his brother Mufti Taqi Usmani Deobandi (patron of Sipah Sahaba Taliban). He was better known than Usmani brothers in Pakistan and the Islamic world and had a much larger following in Pakistan and Afghanistan. The Binori Deobandi madrassa came to prominence in 1979 when the late General Zia-ul Haq Deobandi nominated its then chief and founder Maulana Yusuf Binori Deobandi as chairman of the Council of Islamic Ideology. After the Soviet troops invaded Afghanistan towards the end of 1979, Shamzai in association with other mullahs of Pakistan issued a fatwa calling for a jihad against the Soviet Union. Mufti Shamzai was then the blue-eyed mullah of not only Pakistan’s Inter-Services Intelligence but also of the US Central Intelligence Agency and the Saudi intelligence and played an active role in the recruitment of Muslims from Pakistan and other Islamic countries and training them with the help of Pakistan’s military-intelligence establishment for waging a jihad against Soviet troops. He became close to General Zia, General Pervez Musharraf, General Mohammad Aziz, then chairman, joint chiefs of staff committee, General Muzaffar Usmani (retired), former corps commander, Karachi, and vice-chief of the army staff, and three former jihadi chiefs of the ISI, namely, Lieutenant General Hamid Gul, Lieutenant General Javed Nasir and Lieutenant General Mahmood Ahmed. During his career, he issued nearly 2,000 fatwas. In the 1970s and 1980s, his fatwas were mainly directed against the USSR, India and Israel. After Osama bin Laden formed his International Islamic Front in February 1998, his fatwas became increasingly directed against the US. After the US-led coalition started its so-called war against terrorism in Afghanistan in October 2001, he issued a fatwa calling upon the Muslims of the world to join the jihad against the US. Shamzai was the mentor and godfather of Al Qaeda, the Taliban, the Sipah-e-Sahaba Pakistan (of Haq Nawaz Jhangvi Deobandi) and its militant wing the Lashkar-e-Jhangvi (of Malik Ishaq Deobandi), the Harkat-ul-Mujahideen, the Harkat-ul-Jihad-al-Islami and the Jaish-e-Mohammad. He was designated patron-in-chief of the Jaish and was a member of the shura of Al Qaeda, the Taliban and Maulana Fazlur Rahman Deobandi’s Jamiat-ul-Ulema Islam. Shamzai, who strongly backed Musharraf’s seizure of power in October 1999, became increasingly critical of him after the general decided to cooperate with the US in its operations against Al Qaeda and the Taliban. He and his followers helped the leaders of the Taliban, including Mullah Omar, to escape from Afghanistan into Pakistan and take sanctuary there. It was reported in 2002 that during the US operations against Al Qaeda in Tora Bora, Shamzai’s followers evacuated bin Laden, who had sustained a sharpnel injury, to the Binori complex in Karachi where he was treated till August 2002, by serving and retired medical doctors of the Pakistan army. He later left the madrassa. Post-9/11, Shamzai promoted the formation of a clandestine organisation called Brigade 313 (the number of warriors in the battle of Badr at the time of the Holy Prophet) to wage jihad against Western nationals and interests and Christians in Pakistani territory. It consisted of the Lashkar-e-Tayiba, the Jaish, the Harkat-ul-Mujahideen, the Harkat-ul-Jihad-al-Islami and the Lashkar-e-Jhangvi. All the members of this Deobandi brigade are also members of the International Islamic Front. At his instance, members of this brigade infiltrated into Iraq to join the jihad against the US troops there. Since the beginning of 2003, there were reports of differences in Al Qaeda/Sipah Sahaba and the International Islamic Front of Mufti Shamzai over targeting the Saudi ruling family and its administration by certain sections of these outfits. Shamzai, who had close contacts with the Saudi ruling family and religious clerics and received large funds from them, was reportedly increasingly critical of the Al Qaeda leadership for allegedly weakening the jihad against the US and Israel by targeting the Saudi authorities and thereby losing their support for international jihad. Al Qaeda elements were accusing him of letting himself be bought by the Saudi authorities and supporting the pro-US apostate regimes of the Islamic world. Apparently these differences played a key role in his assassination. (Source).

Although Shamzai was never accused of direct involvement in the Sunni-Shia violence in Pakistan, it is now becoming increasingly clear that the Deobandi platform that has spawned Jehad in South Asia has an intrinsic sectarian element. Shamzai has long been considered the spiritual head of the various Jehadi groups active in Jammu and Kashmir and Afghanistan, including the Jaish, Lashkar-e-Toiba (LeT), Harkat-ul-Jehadi-e-Islami (HuJI), Harkat-ul-Mujahideen and its splinter group Harkat-ul-Mujahideen Al-alami (HuMA) and Lashkar-e-Jhangvi (LeJ). Many of the ‘graduates’ from Binoria have been at the forefront of terrorist activity in South Asia and Afghanistan. Shamzai, however, would not be a natural target for the Shia or Sunni Barelvi, as he is not directly implicated in sectarian violence in Pakistan. (Source)

The following are scanned pages of the book in which Mufti Shamzai Deobandi criticized Ibn Khaldun and described him as a Nasibi (enemy of Hazrat Ali r.a. and Ahl-e-Bait r.a.). Given that Takfiri Deobandis, Takfiri Salafists including those of Sipah Sahaba and Taliban often refer to Ibn Khaldun and Ibn Taymiyya to justify their hatred of Hazrat Ali, Hazrat Hussain and their Shia followers, they were very unhappy with Mufti Shamzai’s book. According to some sources, one Nasibi Deobandi cleric in Karachi namely Mufti Taqi Usmani (known for close contacts with Sipah Sahaba and other Takfiri Deobandi militants) became angry with Mufti Shamzai and may have encouraged Takfiri Deobandis to take action against Shamzai.

Here are the scanned pages (Source): 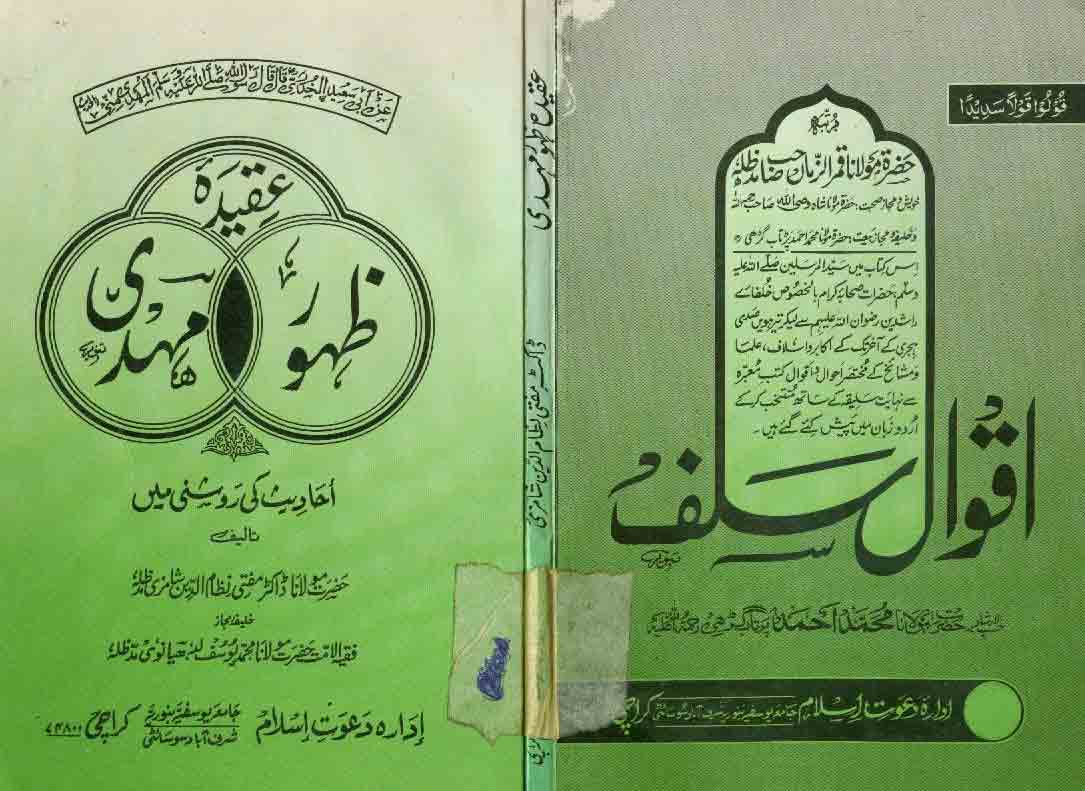 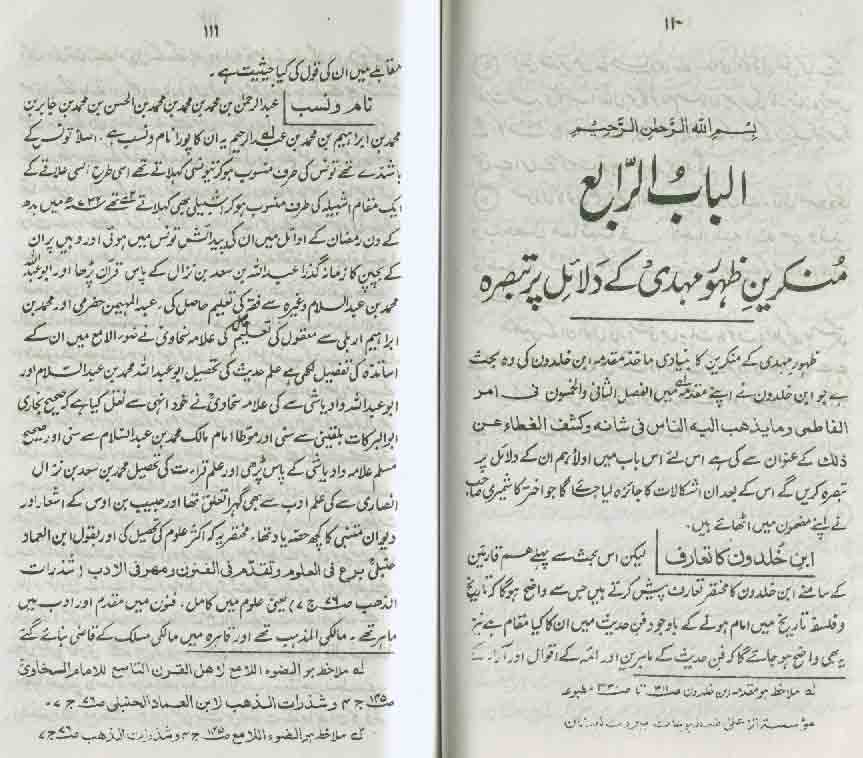 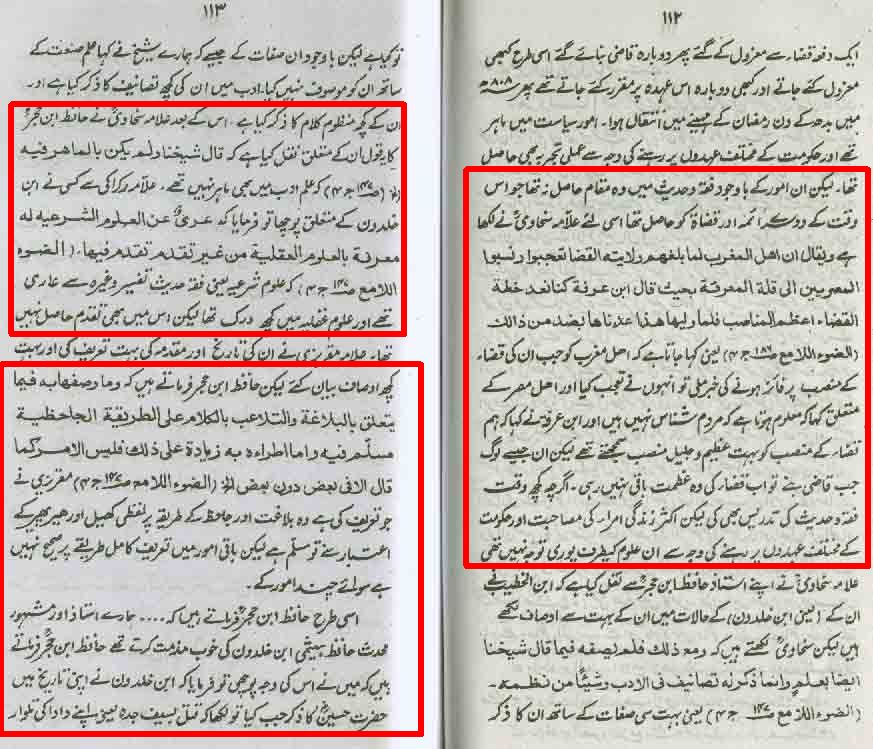 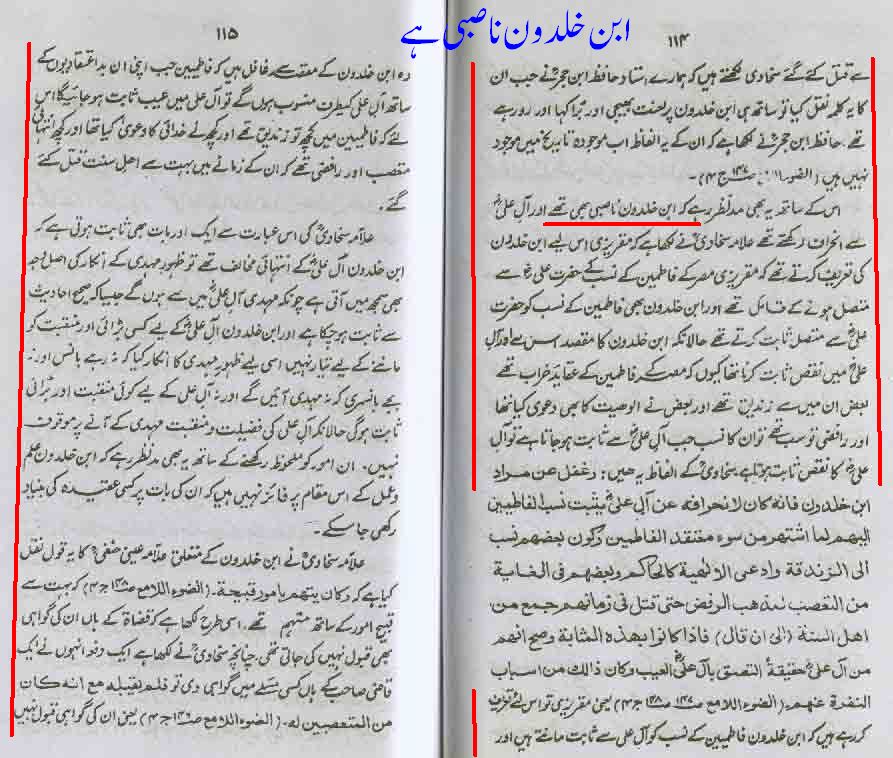 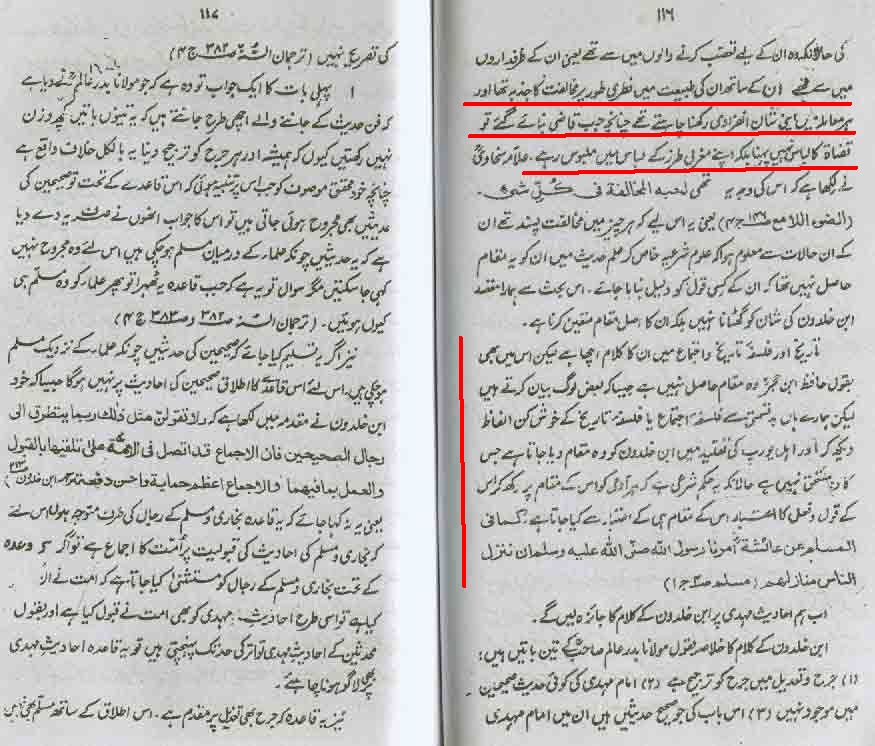